Earnings season kicked off this morning with a number of big banks’ third-quarter results such as JPMorgan (JPM) and Goldman Sachs (GS). Two other Dow components, both Health Care stocks, also had notable reports: Johnson and Johnson (JNJ) and UnitedHealth (UNH).  These two were the first triple plays of this earnings season. A triple play is when EPS and revenues are above analyst estimates while the company also raises forward guidance.

Despite some recent legal headwinds, Johnson and Johnson (JNJ) showed a strong quarter with EPS coming in 11 cents above estimates along with revenues that also topped estimates.  JNJ also raised guidance making it the first triple play for the stock in two years (the last being in October of 2017) and only the ninth since 2000 (as highlighted in the table from our Earnings Explorer snapshot below). In terms of the stock price reaction, normally JNJ has generally not been very volatile with an average full-day gain of just 17 bps in reaction to earnings across all quarters. In quarters when the company has reported a triple play, though, the stock has performed even better with an average full-day gain of 1.2%.  Today, JNJ is on pace to do even better having already gained 2.2%.

From a technical standpoint, the stock remains stuck in its recent range even after today’s rally.  At current levels, though, JNJ yields 2.85% which is more than the S&P 500’s 1.9% yield and the average for other Health Care stocks (1.68%).  Furthermore, of all 61 S&P 500 Health Care stocks, JNJ has the seventh-highest yield.  Johnson & Johnson is also a dividend aristocrat with a long history of paying and growing its dividend, something it has no done for 58 consecutive years.  Given the payout ratio is still relatively low at 44.9%, the company should be able to keep that streak going even if earnings growth stalled out. 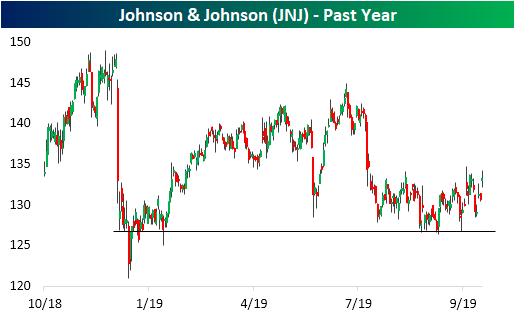 UnitedHealth’s (UNH) price action has been a bit more exciting than JNJ as it has ripped higher in today’s session.  The stock is up over 7.5% after exceeding EPS estimates by 12 cents, topping revenues by over $500 million, and raising guidance.  This is the company’s fourth-best reaction to any quarter’s earnings since 2001 and is the 14th triple play in that time.  The only one of these past triple plays that saw a stronger stock price reaction to earnings was the first quarter of 2011 when UNH finished the day 8.07% higher. 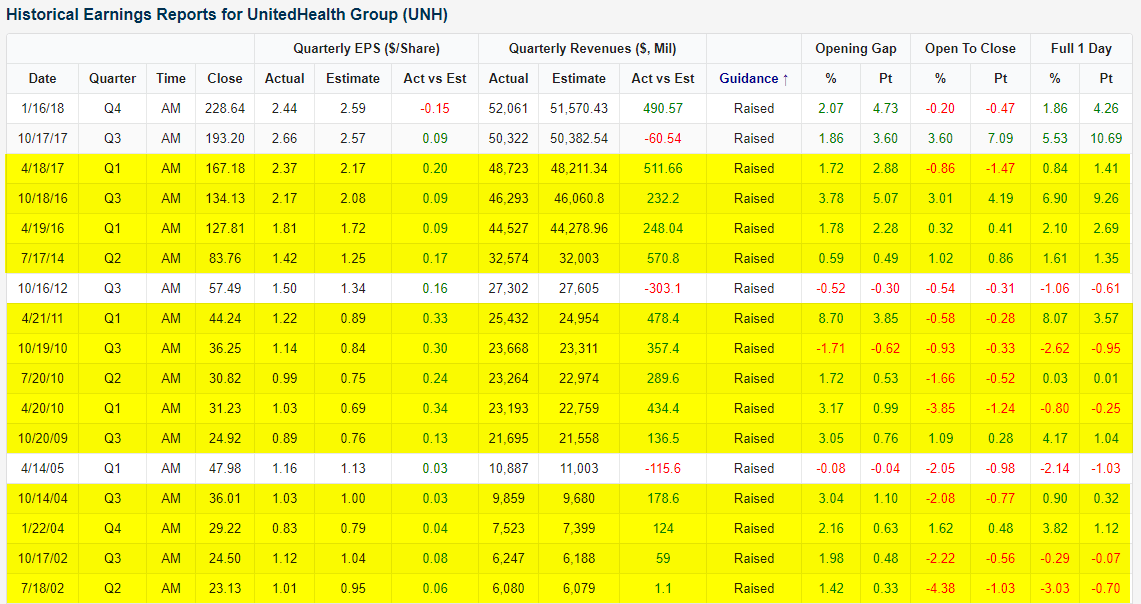 While JNJ is still within its uptrend, this strong response for UNH has actually broken the past few months’ downtrend line.  UNH is now back to where it was in mid-August. From a dividend perspective, UNH is not as attractive as JNJ as it only yields 1.83%, slightly below that of the S&P 500.  The company also does not have as long of a track record (only 9 consecutive years) of increasing its dividend.  Granted, UNH does have a slightly lower valuation with a P/E of 14.6 compared to JNJ’s 14.8.  Both of these are also below the 19x average for all S&P 500 Health Care stocks. Start a two-week free trial to Bespoke Premium to sample our actionable research.  If you use this checkout link, you’ll receive a 10% discount on an annual membership if you stick with it past your trial period. 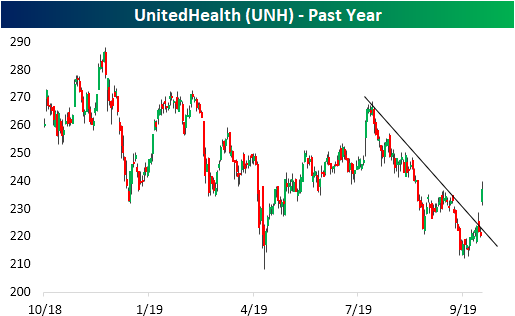