After Wednesday’s close, investors got third-quarter results from blue-chip technology giant International Business Machines (IBM). Consensus analyst forecasts were calling for EPS of $2.66 and revenues of $18.285 billion. While IBM beat EPS by two cents, revenues were more than $250 million below forecasts and down 3.9% year-over-year (the fifth straight quarter with revenues lower than the previous year) even with the boost from newly acquired cloud computing company Red Hat which had stronger revenues In reaction to this miss at the top line, IBM’s stock declined 5.52% in trading on Thursday on elevated volumes.

Putting this week’s report into historical context, Q3 has been one of the weakest quarters in terms of beat rates as well as stock price reaction for IBM.  Since 2000, IBM has only reported better than expected revenues in Q3 38.89% of the time, the lowest of any quarter.  The EPS beat rate of 77.78% could also be better but is better than Q1’s 61.11%.  Given this, Q1 and Q3 stock price reaction to earnings have been less frequently positive with IBM’s stock rising only 22% and 33% of the time, respectively.  Q1 has actually been the weakest quarter as IBM has averaged a full day decline of 2.37%, most of which comes at the opening gap.  Q3 is the next weakest quarter with an average decline of 1.39%. In other words, while yesterday’s decline was larger than expected, it is not unusual for the stock to be weak in Q3. 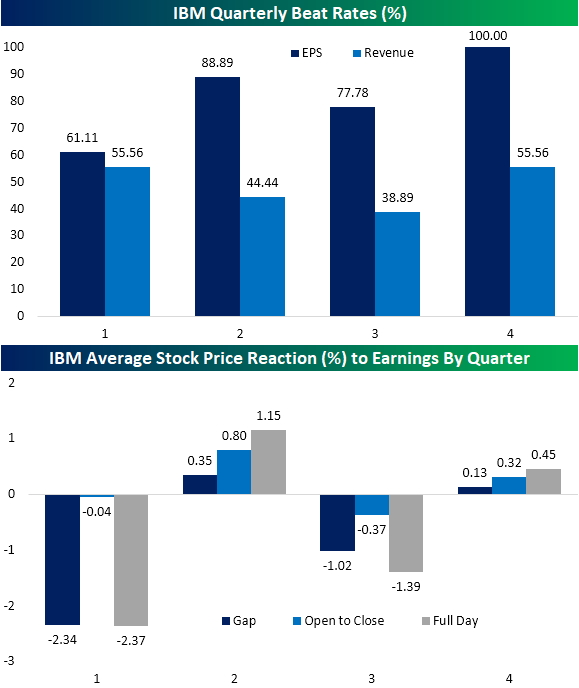 As a result of Thursday’s decline, IBM traded down through both its 50 and 200-DMA and now trades at the lower end of the past year’s range. The decline also pushed IBM’s dividend yield up to 4.83%, which is the highest yield of all S&P 500 technology stocks. It also has the third-highest yield of the 30 Dow stocks behind only Exxon Mobil (XOM) and Dow (DOW).  Although the payout ratio is around the highest levels of the past 20 years at 85.8%, meaning further dividend growth given the slowing pace of revenues could come into question, 2019 marked the 24th consecutive year that IBM raised its dividend. Given this, if IBM raises the dividend again in 2020, the stock could potentially join the Dividend Aristocrats—a group of stocks with 25+ straight years of a growing dividend. If this were to happen, IBM would join Automatic Data Processing (ADP) as the only Technology stocks in the group.  Additionally, at current yield levels, IBM would also be the fourth-highest yielder of the Dividend Aristocrats, behind AbbVie (ABBV), AT&T (T), and Exxon Mobil (XOM).  Start a two-week free trial to Bespoke Institutional to access our interactive chart screens and much more. 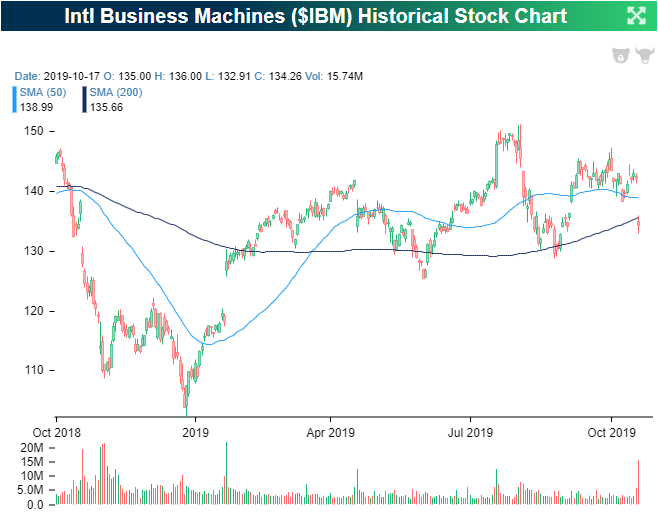