Intel (INTC) surged in the first quarter of 2019, but after lowering guidance in its April earnings report, the stock fell 9% the following day with further declines from there.  Within a month of its earnings report, the stock had fully erased its YTD gains. INTC bottomed in late May and has been in an uptrend ever since.  Along the way, the stock saw an 8.1% pop in response to an earnings triple play and took out resistance around $52.5 in the process. That was not the only notable resistance that has been taken out though. After filling the gap from its April decline, INTC was stuck below its spring highs throughout the fall, but in the past week it has broken out once again. While the stock is pulling back today, and could potentially retest this former resistance level, the current set up for INTC looks attractive.

Valuations for the tech sector have broadly become elevated, especially for INTC’s biggest competitor Advanced Mirco Devices (AMD) which trades at around 200 times earnings, but INTC is one of the more reasonably valued amongst its peers.  INTC has the eighth-lowest trailing price-earnings ratio, 13.98, of the 70 stocks in the S&P 500 Technology sector and its price-sales and price-book ratios are likewise well below the sector average.  Additionally, while not the highest yielder in the sector, INTC’s dividend yield is also on the higher side at 2.1% compared to just 1.29% for the sector and 1.82% for the S&P 500. Start a two-week free trial to Bespoke Institutional to access our interactive economic indicators monitor and much more. 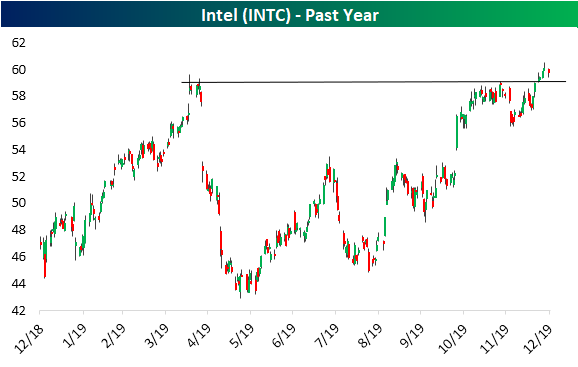