PepsiCo (PEP) is one of the world’s largest food and beverage corporations.  In its long history, PepsiCo has come to offer a much broader range of products than just Pepsi Cola, which was first introduced all the way back in 1893 (when the soda was named “Brad’s Drink”). At the time, the cola was actually being pitched as a healthy, energy drink by pharmacists at drugstores.  “Delicious and Healthful” was one of Pepsi’s first big ad promotions in the early 1900s as it was supposed to aid in digestion as well (from Wikipedia).

Over 125 years since its first product was created, consumers still are loving PEP’s offerings like Frito Lays and other popular sodas as the beverage giant announced strong third-quarter results this morning.  EPS were reported at $1.56 per share, exceeding estimates of $1.51, while revenues came in $254 million above forecasts. This has led the stock price to respond well with a 4% rally today.  That is a better than normal reaction as PEP has averaged just a +0.31% full-day change in response to earnings since 2000.  In fact, over the last 19 years, this would be PEP’s sixth best one-day reaction to quarterly earnings if the gains hold into the close. From a chart perspective, this has led to a 180 from where things stood at yesterday’s close. Amidst yesterday’s broad market declines, PEP broke below support around $134. This support had been in place over the past month and could be traced back to prior resistance at spring/early summer highs. Today, the stock has reversed and the picture is much more bullish as the stock reached new 52 week highs.

In addition to solid technicals with today’s breakout, PEP also has an attractive dividend.  PEP currently yields 2.75%, which is a higher yield than the broader market’s yield just under 2%.  PEP is a member of S&P’s “Dividend Aristocrats” index, which is made up of stocks that have increased their dividends for at least 25 consecutive years.  For Pepsi, the company has now increased its dividend for 46 consecutive years with the most recent increase being to the dividend paid in June.  While the payout ratio for PEP is at the higher end among other dividend aristocrats, at 63.89%, the ratio is not overly concerning as the company has some cushion to continue to payout this dividend. Among other stocks in the Food, Beverage, and Tobacco industry, though, PEP’s dividend comes up just short of the group’s 3% average yield. 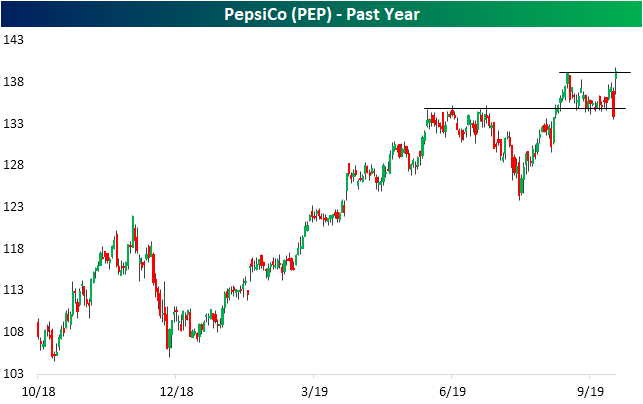 PepsiCo (PEP) stacks up closely with one of its oldest and largest competitors, Coca-Cola (KO). Like the broader industry group, Coca-Cola possesses a higher yield than that of PEP, but only slightly so at 2.97%.  But KO also has a less attractive dividend payout ratio of 65.5%. Both stocks have P/E ratios right around 25.  While KO is moving higher by 1.5% today on the back of PEP’s strong earnings, KO’s steep declines yesterday violated the past several months’ uptrend line from which it has not yet recovered, unlike PEP.  Start a two-week free trial to Bespoke Premium for more dividend stock insights! 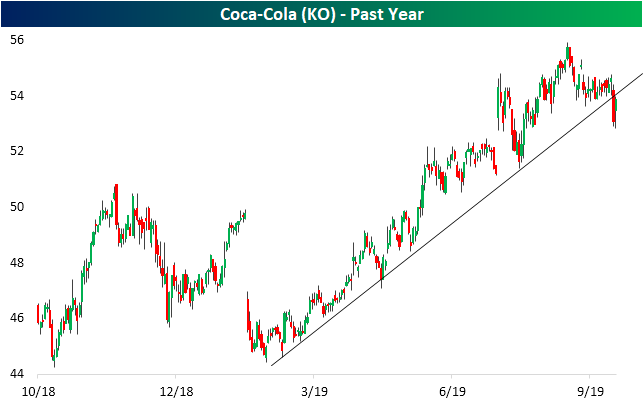