After declining alongside the rest of the market in the final quarter of 2018, Cisco (CSCO) experienced a sharp rebound in the first half of 2019. But that rally screeched to a halt in August after CSCO and competitor Arista Networks (ANET) lowered guidance citing the impact of trade issues. Whereas the stock was sitting on a 34% YTD gain at its highs in July, it is currently only up only 9.9% YTD. Without finding much relief since those declines this past summer, CSCO’s shorter-term chart has left much to be desired, but on a long-term basis, not all is lost as the stock finds itself at the bottom of the past few years’ uptrend. 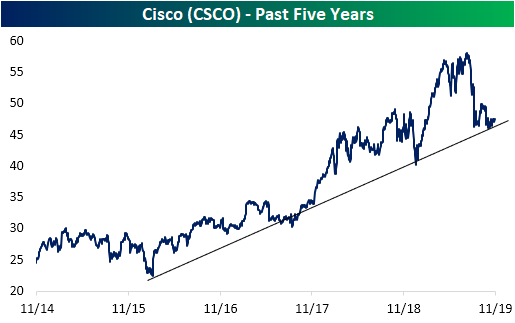 Given these declines, CSCO’s valuation has become more attractive and is off the highs from earlier this year. The forward P/E ratio now sits at 14.1 which is below the average for both the Technology sector and Hardware and Equipment industry group.  Likewise, the enterprise value is only 9.8x EBITDA which is also below the sector and industry group averages of 15 and 10.8, respectively.

CSCO’s dividend yield has also remained attractive at slightly less than 3%.  That is not only higher than the broader S&P 500 and government bonds but is also double the average yield of other S&P 500 technology sector stocks.  Cisco (CSCO) first began paying a dividend in 2011, and though that is not an exceptionally long track record, the quarterly payout has grown every year, from 6 to 35 cents per share. CSCO also looks likely to continue to be able to pay and grow this dividend seeing as the company has more cash than debt (Net debt to EBIDTA ratio is -0.5) and the payout ratio is still on the lower side at 67.5%.  Start a two-week free trial to Bespoke Institutional to access our interactive Security Analysis tool, model portfolios, and more. 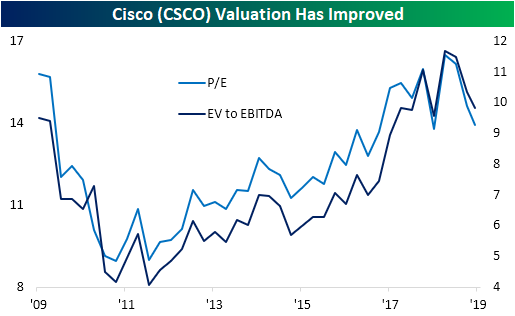