There are few groups that have gotten hit harder from the 2019-nCov virus than the major cruise lines like Carnival (CCL), Royal Caribbean Cruises (RCL), and Norwegian Cruise Line (NCLH).  Each of these stocks put in place a recent high on January 17th but have fallen dramatically since then. In the immediate days following that date, the first US cases were confirmed, and the first travel restrictions and other precautionary measures like airport screenings began to be put in place.  Since then, each of these three stocks has fallen by double-digit percentages with the biggest loser being CCL which at yesterday’s close was down 19.5% since 1/17 alone.

The reason for CCL’s outsized declines compared to its peers is in part due to the fact that it has already confirmed cases of the virus aboard one of its ships which may not come as that big of a surprise considering CCL has the largest fleet of these three companies; as such, it would naturally have a higher probability of being exposed to the virus. 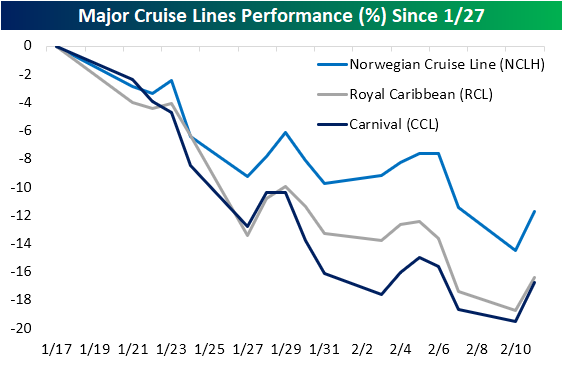 Despite a reprieve today with the stock up over 3%, the recent declines for CCL come in the context of a much longer downtrend that has been in place since early 2018. Over the course of the past two years, the 200-day moving average has acted as stiff resistance for the stock with the only significant break above that level being a fake-out in September 2018. More recently, though, there has been another after a solid response to earnings in December sent CCL surging. CCL held above these levels, successfully retesting the 200-day and putting in a higher high over the next few weeks with the 50-DMA even catching up and crossing above the 200-DMA. That is until coronavirus fears sank the stock back below both moving averages creating an overall mixed technical picture. Now at very oversold levels, CCL has the potential to sail back up to last month’s highs if the worst of the coronavirus fears is behind us and the negative headlines subside. On the downside, any break below last year’s low just above $40 would negate any of the technical positives that CCL has achieved over the last several weeks. 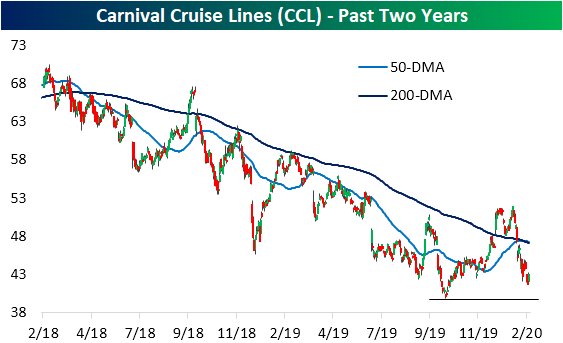 Adding to the reasons CCL could see a rebound is its attractive valuation.  CCL is the largest cruise liner stock by market cap ($25.8 billion) and fleet size (over 100 ships). Despite its size, compared to RCL and NCLH it has the lowest price-to-earnings, price-to-book, price-to-sales, and EV/EBITDA.  As shown in the charts below, the P/E and P/S ratios are now around their lowest level of the past decade.  Although it is not quite at the same extreme, the P/B ratio is similarly at the low end of the past decade’s range.  Finally, CCL is also a very high yielder with a dividend yield of 4.8%.  That is not only larger than those of the other cruise lines but is also the seventh-highest yield of the S&P 500’s Consumer Discretionary stocks. Carnival has consistently paid this dividend over the past ten years and appears capable of continuing to do so going forward given the payout ratio is remains healthy at just 46%.  Start a two-week free trial to Bespoke Institutional to access the full range of research and interactive tools. 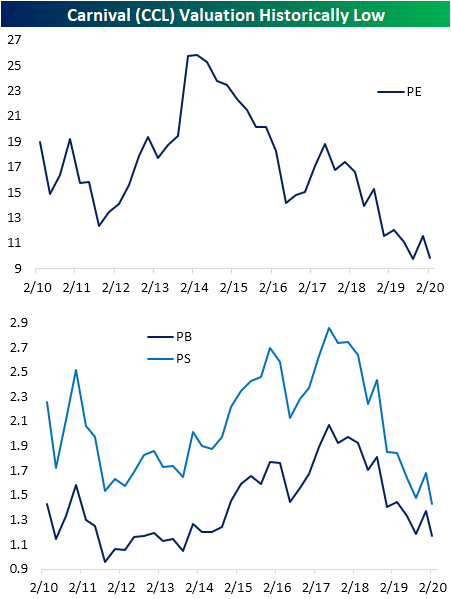