The Health Care sector has rebounded recently, and pharmaceutical stock AbbVie (ABBV) has rallied right alongside the sector.  Since reaching its multi-year low around $62 in the middle of August, which also coincided with support from the top end of its former trading range, ABBV has surged over 37%. While it is currently pretty extended at over 2 standard deviations above its 50-DMA, the rally has broken what had been an 18-month downtrend from early 2018.

One factor that weighed on the stock during that time was concerns over generic competition as the patent for the company’s arthritis drug Humira—which makes up the bulk of the company’s revenues—is set to expire in 2023. Despite that looming headwind, ABBV has made efforts to diversify its revenue sources including on-going discussions for the acquisition of Botox maker Allergan (AGN). Additionally, other product lines are experiencing considerable growth such as its cancer treatment Imbruvica which saw revenues over $1.25 billion in the most recent quarter; a 29.3% YoY growth rate.

Even with the massive surge, ABBV is still the highest yielding stock in the S&P 500 Health Care sector.  Yielding 5.54%, the next highest dividend in the sector is Pfizer (PFE) which yields 3.9%.  That dividend is more than twice the size of the average S&P 500 and Health Care sector stock. Earlier this month, the company announced that the quarterly payout would be raised another 10%. Given that the payout ratio now sits at 84.1%, the ratio is getting a bit high, but the company’s long dividend history makes this an easier pill to swallow.  ABBV has now raised its dividend for 48 consecutive years (includes when the stock was part of Abbott Labs (ABT) from which it was spun off in 2013), making it a Dividend Aristocrat.  Not only does ABBV belong to this group, but it also boasts the highest yield of all the aristocrats. For reference, ABBV’s stock goes Ex-Dividend on January 14th, 2020. Start a two-week free trial to Bespoke Institutional to access our interactive economic indicators monitor and much more. 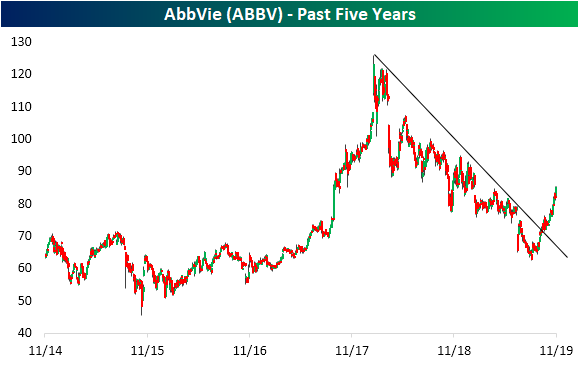