In last Thursday’s Chart of the Day, we highlighted how important dividends are for long-term investment performance. While dividends do help to boost investment returns over the long term, in the short term there is often an ebb and flow of dividend-focused ETFs under and outperforming in terms of price moves. For example, up until June, the S&P 500’s highest yielders measured by the SPDR S&P 500 High Dividend Yield ETF (SPYD) had mostly been trading in the green whereas the S&P 500 (SPY) was deep in the red.

With equities broadly taking a turn lower over the past week, SPYD has held up relatively well when compared to the S&P 500 (SPY).  Even though SPYD has not avoided declines (as we also showed in our decile analysis, the highest dividend payers have only slightly better performance than non-dividend payers), the relative strength line of SPYD versus SPY has broken out of the past couple of months’ downtrend.  That being said, it has not been a sharp move higher like what was observed in the first half of the year, particularly in the second quarter. In other words, the highest yielders are back to outperforming the broader market but not to the same extent as earlier in the year. Click here to learn more about Bespoke’s premium stock market research service. 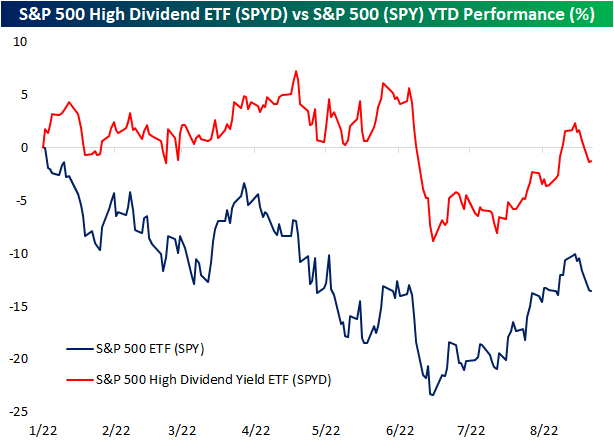 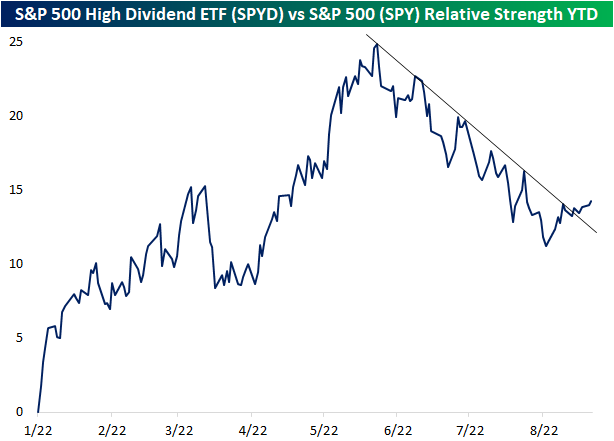