From the start of the year through August 1st, air passenger traffic in the US experienced a massive rebound with the seven-day average passenger throughput in the US more than doubling from just over a million to 2.082 million.  What was notable about that August 1st level was that it was pretty close to average throughput levels seen in late Summer/early Fall of 2019 before the pandemic ground things to a halt in early 2020.

August has been unfriendly to the skies, though, and ever since that peak reading on 8/1, passenger traffic has been drifting lower.  The Delta variant and the accompanying surge in cases has no doubt had an impact on air passenger traffic, but seasonality has likely been a contributing factor as well.  While we don’t have passenger traffic levels prior to August 2019, it only makes sense that as schools start to go back into session and the Summer vacation season comes to a close, Americans are going to be travelling less for vacation. 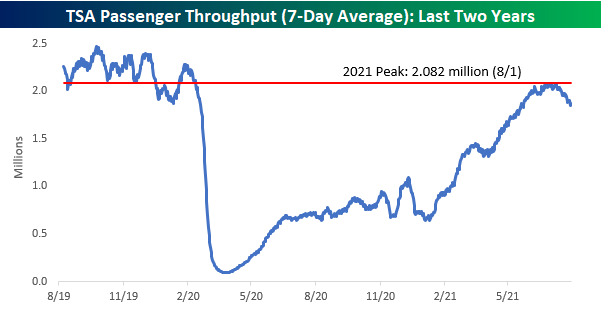 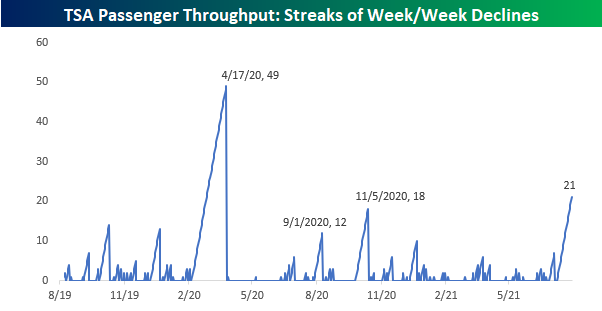 While the declines in passenger traffic have been steady, the magnitude has been modest.  The chart below shows the w/w change in passenger traffic over the last two years, and the declines of the last three weeks have been notably modest.  During the current three-week decline, the maximum w/w decline has never reached double-digit percentages.  In fact, the last time air passenger traffic was down over 10% on a w/w basis was seven weeks ago on July 4th.  One has to think that if Delta variant concerns were really having a major impact on air travel, the drop-off in air traffic would have been more abrupt, similar to what occurred in the early stages of the pandemic.  Click here to view Bespoke’s premium membership options. 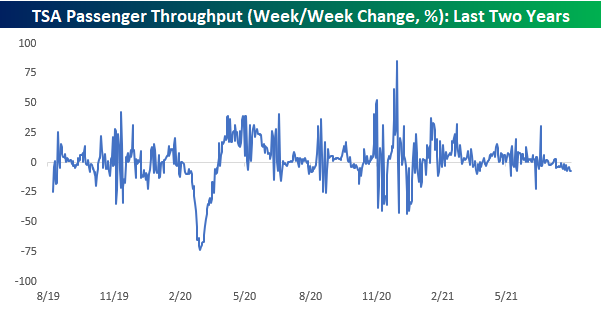