While many areas of the market have seen sizable pullbacks this year, the broader market has been stingier.  Just this morning, a client was lamenting the fact that they had a decent amount of cash, but the market just wasn’t providing opportunities to get in.  So far this year, the S&P 500’s largest decline from a peak (on a closing basis) has been 4.23%, and given that we’re not even four full months into the year, we initially thought that 4% seemed normal enough especially when the earlier months of the year tend to be positive.

In order to see how this year stacks up to prior years, the chart below shows the duration into each year (on a percentage basis) that the S&P 500 first closed down 5% or more from its YTD peak. Years in green indicate that there wasn’t a single point in the entire year that the S&P 500 experienced a 5% decline.  The last occurrence was in 2017, and there have been a total of seven years since 1928.  As we near the end of April, we’re nearly a third of the way into 2021, and compared to the ‘average’ year, we’ve already gone longer without a 5% pullback.  Since 1928, the S&P 500 usually experiences its first 5%+ pullback 28% of the way into the year, which coincidentally enough works out to April 15th – the day before Federal taxes are typically due!  In fact, at this point in prior years, the S&P 500 has already experienced its first 5%+ pullback more than 65% of the time.  Believe it or not, in 30% of all years since 1928 the first 5% drop occurred in the month of January.

Based on prior years, the market to this point has in fact been stingy in terms of providing opportunities for investors to add exposure, although based on today’s reports of new capital gains tax increases from the Biden Administration, that window may soon open.  Click here to view Bespoke’s premium membership options for our best research available. 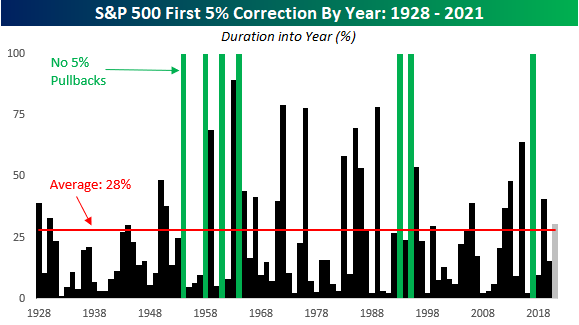