Economists were not anticipating a particularly strong Dallas Fed Manufacturing Activity reading as forecasts were calling for it to remain in contractionary territory at -6.5 (though that would have been an improvement versus last month’s -7.3 reading).  Instead of the modest improvement that was expected, the index plummeted further hitting a new cycle low of -17.7.  The region’s manufacturing economy experienced the largest decline in activity since the spring of 2020.  Before that, 2016 was the last time this index was this low. 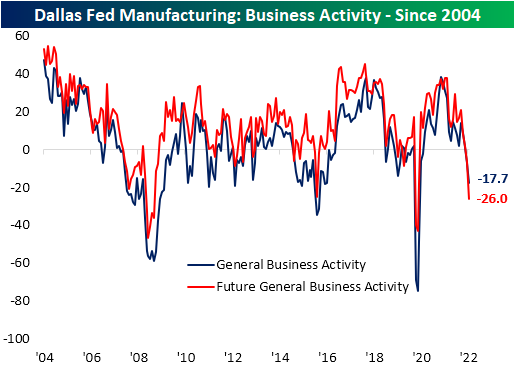 Looking across the categories of the report, there was little to like.  Demand took a big hit with production slowing down in tow.  Meanwhile, supply chains appeared to face increased stress contrary to other readings on that space over the past few months.  Expectations painted a significantly soured outlook with several near record month-over-month declines as the indices reached low single digit percentile readings.

As mentioned above, Texas area manufacturers appeared to have reported a significant slowdown in demand as the index for New Orders dropped double digits and into the first contractionary reading since May 2020.  Dropping hand in hand was the New Orders Growth Rate and Unfilled Orders. For the latter, the decline in expectations actually surpassed the spring of 2020 low and is now only one point above the December 2008 record low.  Shipments was the only one of these indices to narrowly remain in expansion in June. 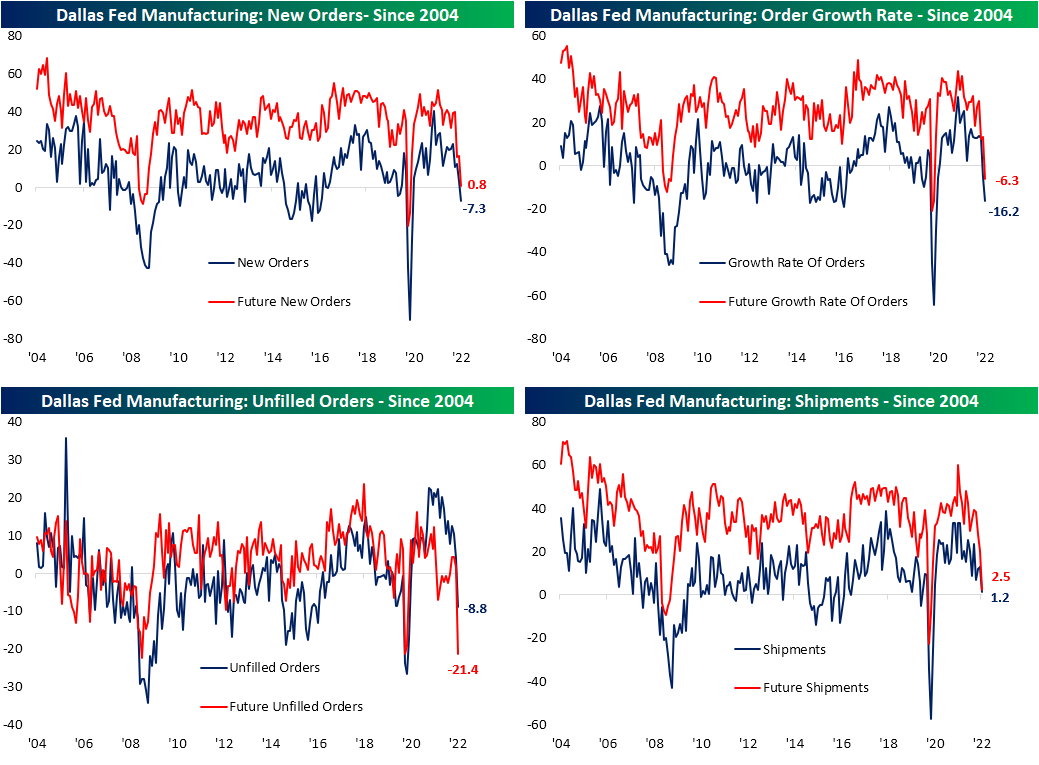 Manufacturers have quickly responded to that demand destruction by cutting back on production and capacity utilization. Expectations have seen even larger declines, although each of these indices, for the time being, remain at expansionary rather than contractionary levels. 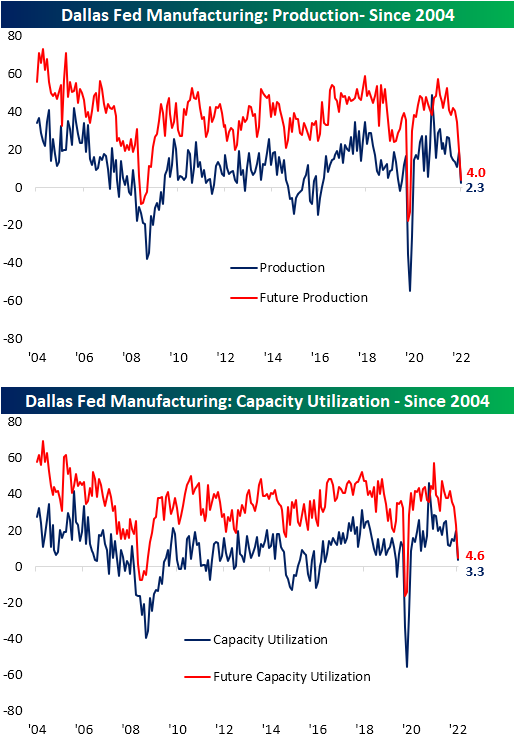 High prices and long lead times have been thorns in the side of businesses throughout much of the pandemic, and for better or for worse, that trend appears to be turning around.  Both Prices Paid and Received pulled back across expectations and current conditions in June. Both indices have now erased most of the moves higher since Q1 of last year.

Supply chain indices had a bit more puzzling and inconsistent of a print.  After massive improvements last month that was echoed throughout several other data points external to this report, current conditions for Delivery Times returned right back up to where they were earlier this year. In fact, the 15.6 point month over month surge was the second largest on record behind the 21 point jump in March of last year. However, the expectations index lends some evidence that it may be a one-off increase.  Expectations cratered with the largest one month decline on record. Not only was the move massive, but at -17.7, it is the lowest reading since March 2009. Inventories saw a similar move with current conditions indicating a large build in inventories as expectations called for a substantial decline further down the road. Given the weaker readings on New Order Expectations, that decline in Inventory Expectations is likely more of a function of expected improvements in supply chains. 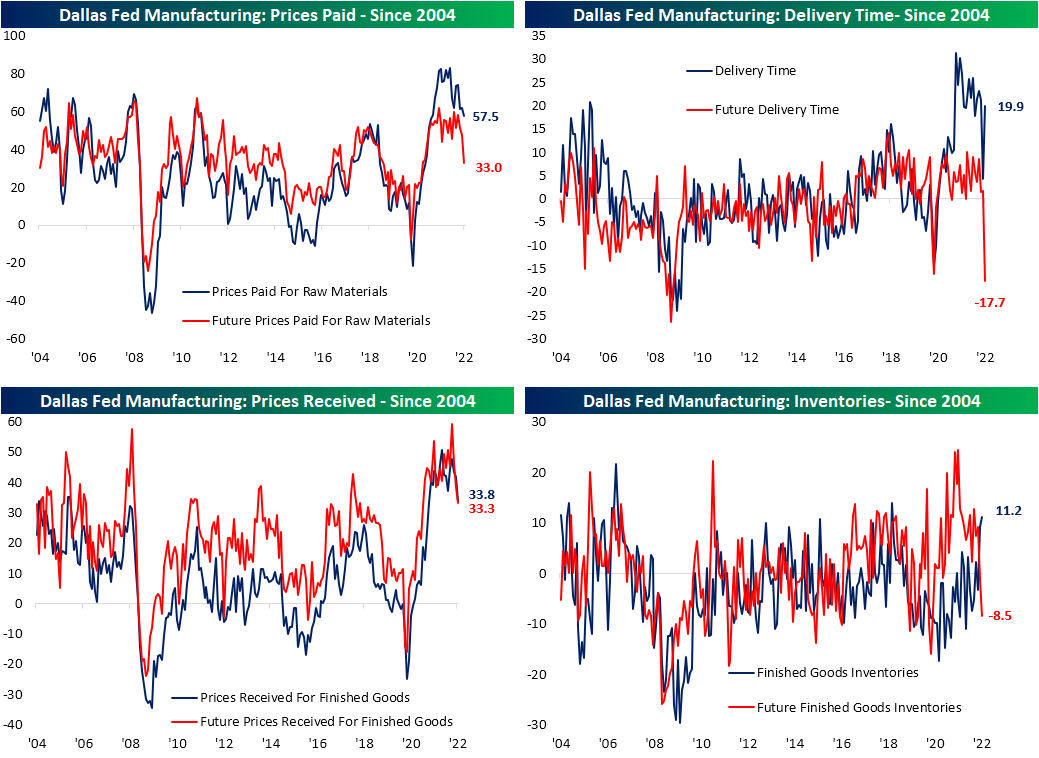 Apart from the large declines across expectations indices, another indication of increased pessimism could also be found in the Outlook Uncertainty index.  This is a more recent series included with the report dating back to only the start of 2018.  As shown below, after spiking during the first half of 2020, it normalized up until last summer when it began to rise again, albeit more gradually. This month saw the index breakout in a big way as it experienced the second largest month-over-month increase on record behind March 2020.  Click here to learn more about Bespoke’s premium stock market research service. 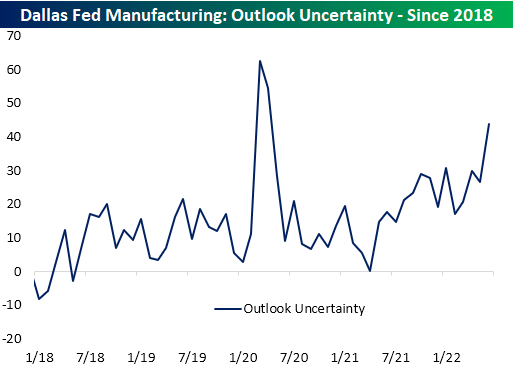