The new year’s first regional manufacturing reading came out of New York this morning. Covering the month of January, today’s Empire Manufacturing report was outright bad at the headline level. While the December reading was at the high end of the post-pandemic and historic range (in the 95th percentile of all months), the January reading was far weaker falling into the bottom quartile of historic readings. At -0.7, it was the first contractionary reading for Empire Manufacturing in eighteen months (since June 2020).  That 32.6 point drop was also the third-largest month-over-month decline on record behind March and April 2020. 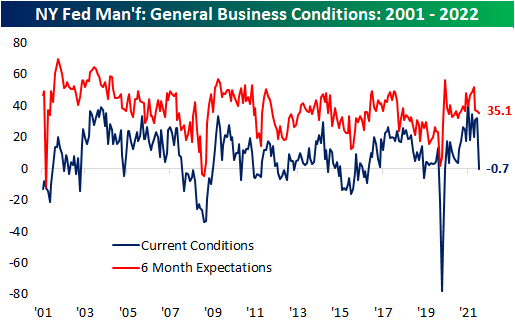 Looking under the hood of the report, the massive drop in general business conditions is to a certain extent misleading and there is nuance to the various categories.  Breadth was in fact bad indicating a broad deceleration in activity across categories, but the massive drop in general business conditions was largely due to a massive slowdown in demand.  Like the headline number, both the indices for New Orders and Shipments fell dramatically. Alongside General Business Conditions, only New Orders saw a contractionary reading on that move. Again, other areas of the report did not help the headline index with only Inventories rising month over month. That being said, current levels remain far more elevated for those other categories with many in the upper decile of their historical ranges. 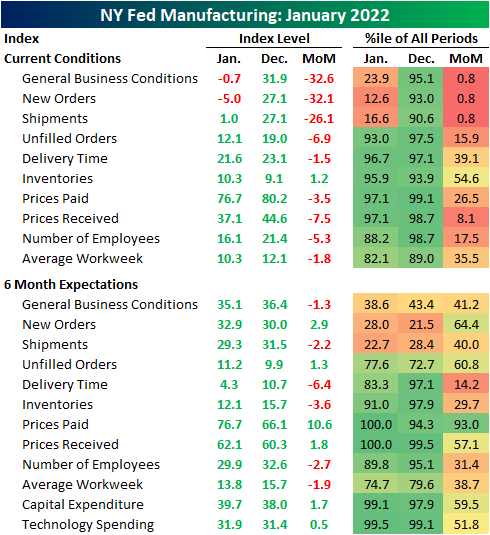 The decline in New Orders points to demand falling for the first time since August 2020. As a result, Unfilled Orders also fell significantly as Inventories rose, but the readings remain much healthier in the 93rd and 95th percentiles, respectively. In other words, even though there wasn’t the same massive inflow of orders as we’ve seen over the past year and a half, there is still plenty of demand left to be fulfilled. Unfortunately, Shipments decelerated sharply and only increased slightly which could be a result of higher COVID case counts holding back production/fulfillment. 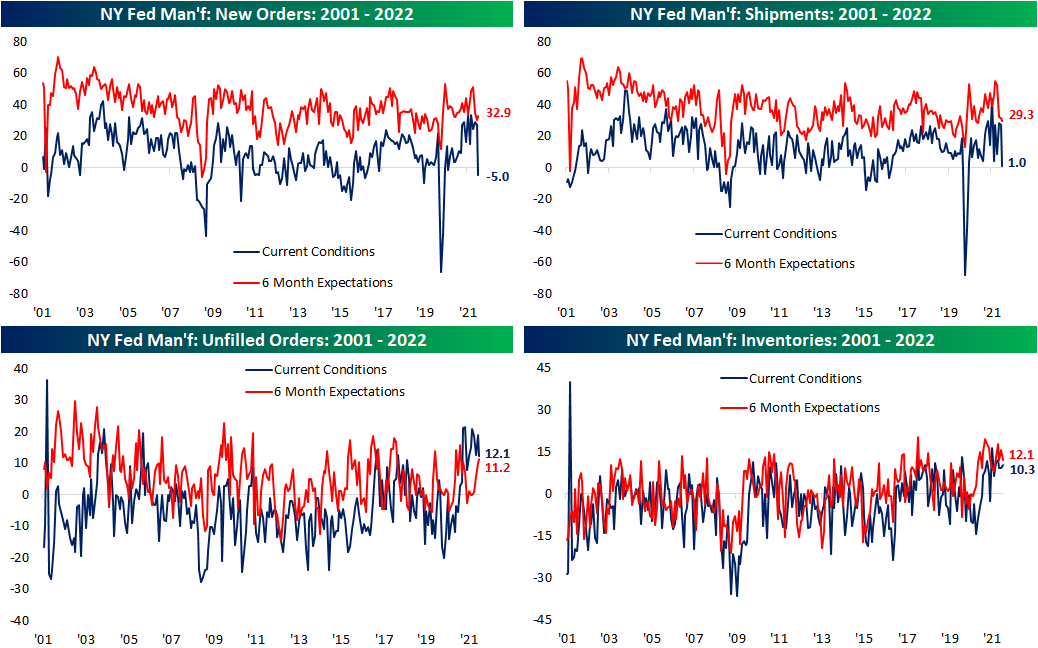 One interesting aspect to note for demand and shipments (and this also applies to the headline index) is the huge disconnect between the moves in current conditions and expectations. Expectations indices remain far healthier in comparison to current condition indices, and the drops, if any, were much more modest this month. In fact, in the charts below showing the month-over-month changes of all months on record between the two series, January was certainly an outlier month. A heavy burden from absentees as a result of COVID could be extrapolated as a reason for this disconnect. In other words, New York area firms were hit hard by COVID in January but they do not expect the current wave’s impact to last out through six months. 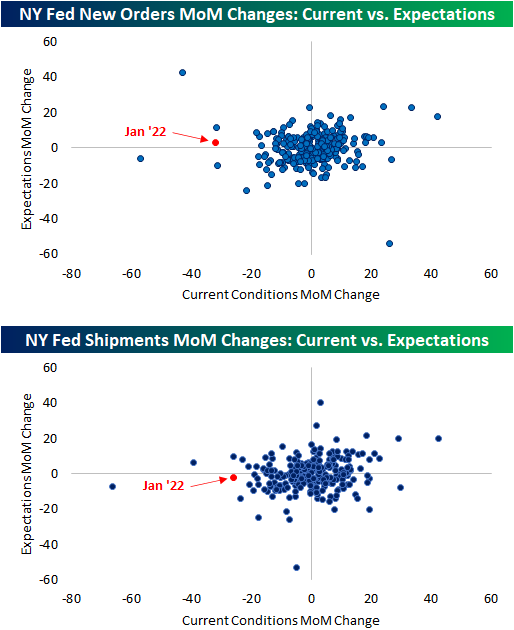 Even though New York area manufacturers were not seeing growth in the pace of getting products out the door as in past months, working in their favor has been a significant improvement in supply chains. Delivery times remain well above any period prior to the pandemic, but the index fell for the third month in a row. 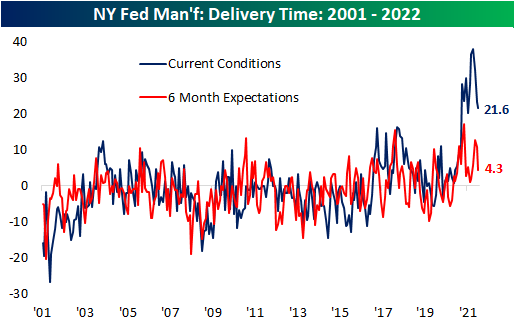 Another more welcome sign of the report was that Prices Paid and Prices Received have both peaked.  The drop in Prices Received was more significant of the two. On the downside, expectations have continued to rise unabated with each index hitting a record high. 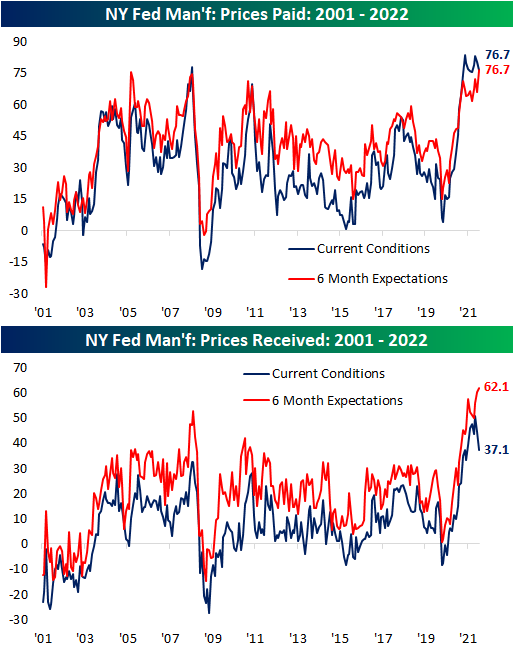 Hiring pulled back in January as did Average Workweek with the weakest readings since last August. Expectations for Number of Employees hit its lowest level since last February. Meanwhile, manufacturers plans for spending on Tech and Cap. Ex. is far more optimistic with January readings in the top 1% of all months on record.  Click here to view Bespoke’s premium membership options. 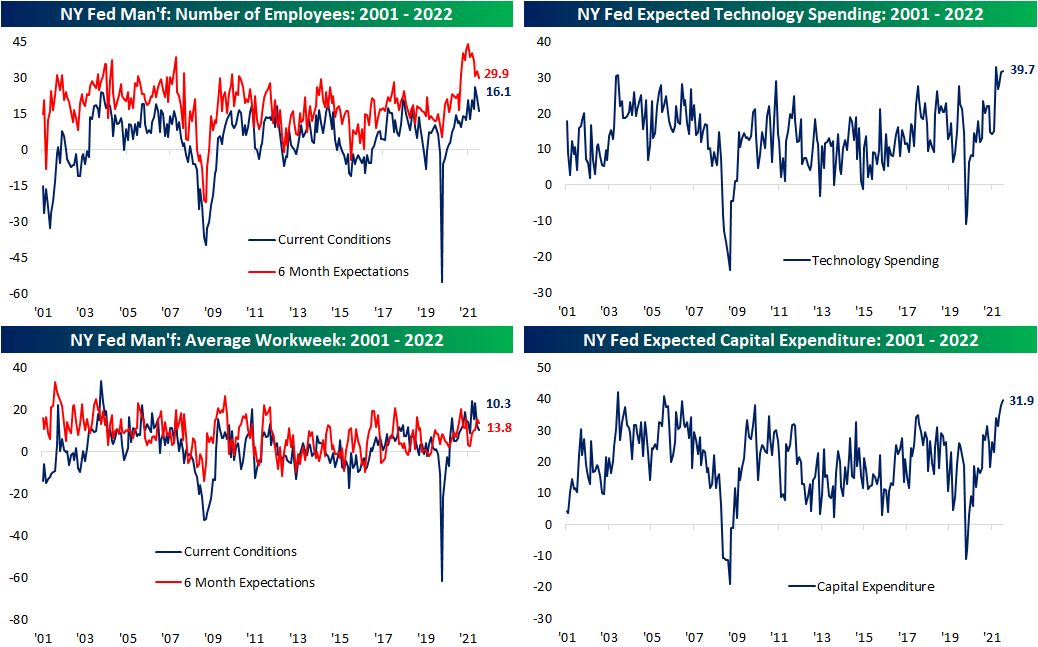