Yesterday was a flat out terrible day for equities. Breadth was extremely weak as the S&P 1500 had its worst day since March 16th falling over 6%. Most of the individual stocks within the index had fallen by even more with 23% down double digits.  As shown below, one of the key driving factors of yesterday’s move was performance since the bear market low on March 23rd up through the start of this week.  More specifically, the was clear profit-taking of the best-performing stocks of the new bull market.  The decile of stocks that had risen the most from the March 23rd low through Monday fell 12.45% on average yesterday.  No other decile fell double digits. Meanwhile, the stocks that have lagged on the way up actually outperformed yesterday, though that is not to say they were saved from sharp single-day declines. 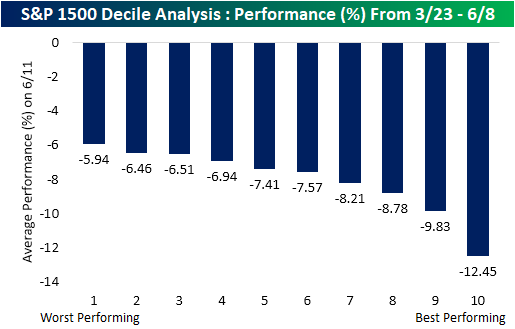 As shown in the first chart below, performance in the initial rally off the March lows was not a very clear factor in yesterday’s selling though the best and worst performers in that period did see outsized declines yesterday. Alternatively, more recent performance was a more pronounced factor yesterday.  Beginning in mid-May there began to be some rotation into names that had lagged in the first leg of the bull market rally.  Over the past several weeks since then, things have reversed and these have been some of the best-performing stocks.  As a result, there was major profit-taking of these recent winners yesterday.  The best performing decile from 5/13 through the start of this week averaged a decline of 13.92% yesterday while the worst performers only fell 4.64% on average. 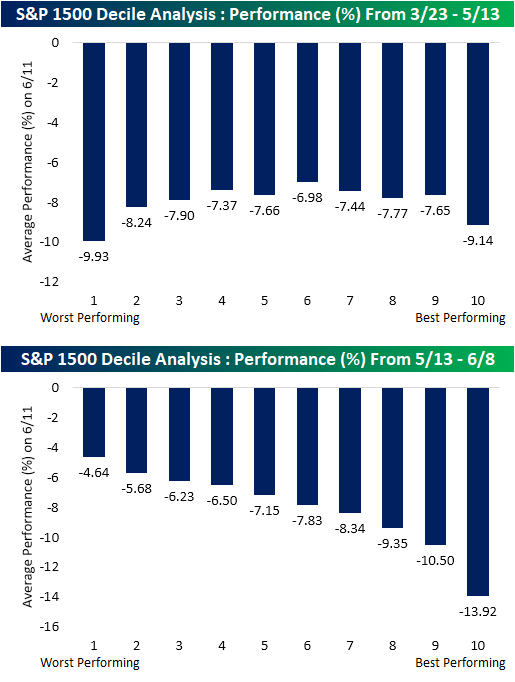 Another trend recently that has received a lot of headline attention has been the retail investor’s roll in the rally, especially in regards to the run-up in some less attractive and more beaten-down names. Given that lower-priced shares are typically seen as easier to stomach to retail investors, that also seemed to play a role yesterday.  Both low market cap and low priced shares faced the worst declines yesterday.  Alternatively, high priced and high market cap names saw much smaller declines. Click here to view Bespoke’s premium membership options for our best research available. 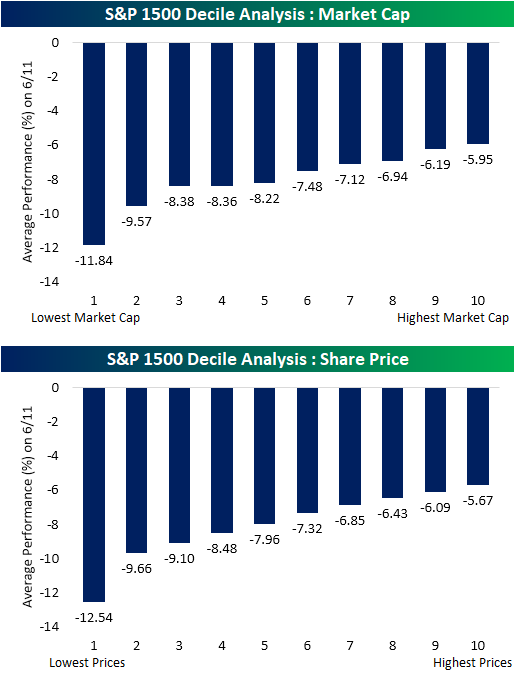