December typically tends to be a month of lower stock market volatility following a period in late October and early November when volatility tends to peak.  This year, however, has been quite different.  As of yesterday’s close, the one-month rolling average of one-day absolute moves for the S&P 500 was 1.06%.  (This means the S&P 500 has been averaging a daily change of +/-1%+ over the last month.)  As shown in the dark blue line below, this has actually been the most volatile one-month period for all of 2021.  As the light blue line shows, daily volatility for the S&P 500 is usually plummeting at this time of year as traders typically slow down dramatically around the holidays. 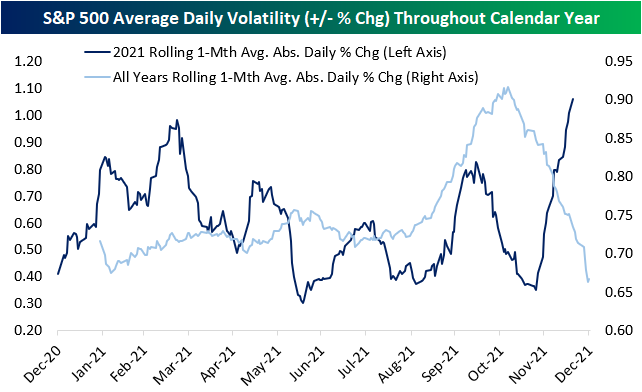 Since the 5-day trading week was established back in September 1952, December has historically been the least volatile month of the year, averaging an absolute daily change of 0.61%. This year, the average daily change since the start of December has been 1.07%, which is far above the next closest level seen in March 2021 (+/-0.83%). October, the month that has historically been the most volatile month of the year, ranked 6th in 2021. 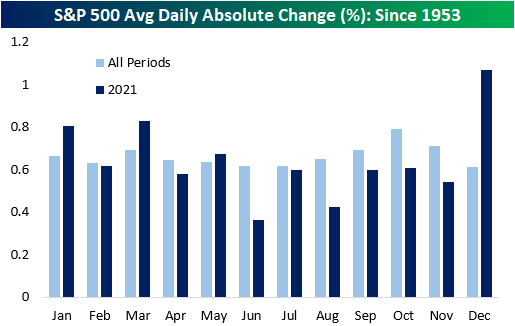 So what tends to occur when volatility inverses its seasonal trend in December?  Since 1953, there have been five prior years where December was the most volatile month of the year: 1973, 1978, 1985, 1995, and 2018.  Below we show how the S&P 500 performed in January following the five prior years listed, and we also show the full next-year change.  As shown, January was positive in four of five instances, and the one January that saw a decline was in 1974 when it fell only 1%.  In the most recent occurrence, the 9.2% decline in December of 2018 was followed by a 7.9% move higher in January of 2019. In the following year, the median performance of the S&P 500 was +14.6%. Click here to view Bespoke’s premium membership options. 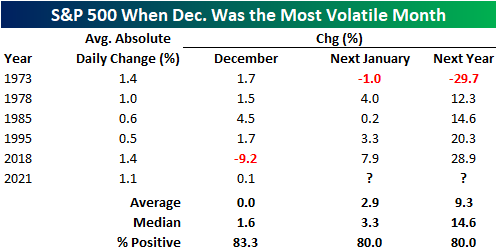