Yesterday, the S&P 500 had one of its best days on record and the best day since 2008 as the index soared nearly 10%.  As we noted in last night’s Closer, for stocks that have been hit the hardest during the past month’s equity rout, yesterday’s buying spree was a very welcome sign.  Yesterday saw a massive “dash for trash” as the current bear market’s worst performers were the best performers in yesterday’s session. The average stock in the bottom 10% of performers over the course of the current bear market dating to February 19th was up an astonishing 18.1%. All five of the bottom deciles in the distribution of returns since the bear market began were up at least double-digit percentage points. On the other end of the spectrum, while the best performing stocks were still positive on the day, their rallies were much more muted as the average stock in the best-performing decile only rose 3.38%.  Start a two-week free trial to Bespoke Institutional to access nightly Closer and full range of other research and interactive tools 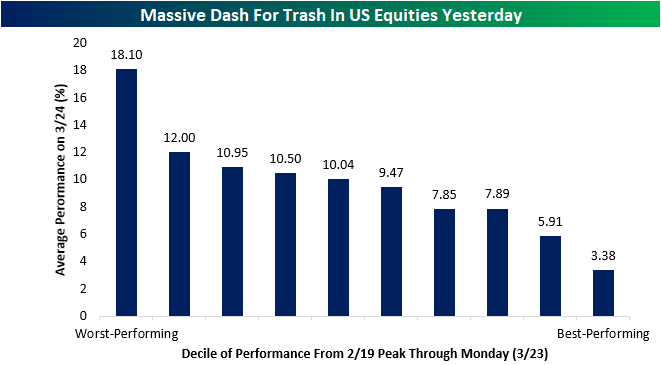