Dallas Manufacturing Bounces Back After the Storm

The reporting period for the Dallas Fed’s Manufacturing Outlook Survey for the month of February had some overlap with the region’s winter storms, but the extent of the damages were likely not fully captured. Fast forward a month to the March report and the region appears to have seen a strong bounce back.  This morning’s release saw a huge beat relative to expectations just like other regions’ manufacturing surveys for the month of March.  The Dallas Fed’s reading on the region’s manufacturing sector was actually expected to decline to 16.5 from last month’s reading of 17.2; the second-highest level of the index since the start of the pandemic. Instead of falling, the index surged to a new high post-pandemic high of 28.9. That is the best level since August 2018. Prior to 2018, the only other times that there has been as strong of readings was in the first few years of the index’s history. 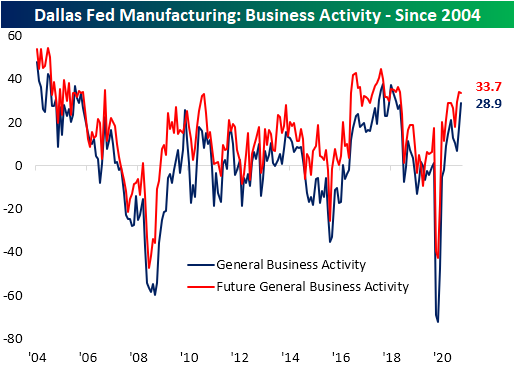 The General Business Activity index was far from the only one to come in with an impressive reading. Across the 16 indices, 13 are in the top decile of readings with three of those at record highs.  Expectations came in more mixed with most indices still positive but at less impressive levels historically while just over half fell month over month in March. Overall, the report showed that general conditions continue to improve with higher growth in orders, ramping up of production and employment, and higher prices. Granted, given the survey asks respondents to report on the change in activity from the prior month (i.e. when the winter storms had dampened activity), some of these strong readings could be a result of base effects.

New orders have consistently grown over the past several months, but since the fall, that pace of improvement had generally plateaued. But with activity bouncing back after the storms, the indices for New Orders and Order Growth Rate both ripped higher in March. New Orders topped a reading of 30 for the first time since June 2018 this month while Order Growth Rate reached the highest level since May of that same year.  Thanks to that growth in new orders plus an inability to fulfill existing orders last month, the index for Unfilled Orders has experienced a more unprecedented spike higher. The 12.1 point rise month over month was in the top 5% of all monthly moves leaving the index at the second-highest level on record behind September 2005 when it was 10 points higher. Given that massive backlog, Shipments also have ramped up as the index rose 17 points to 33.1. 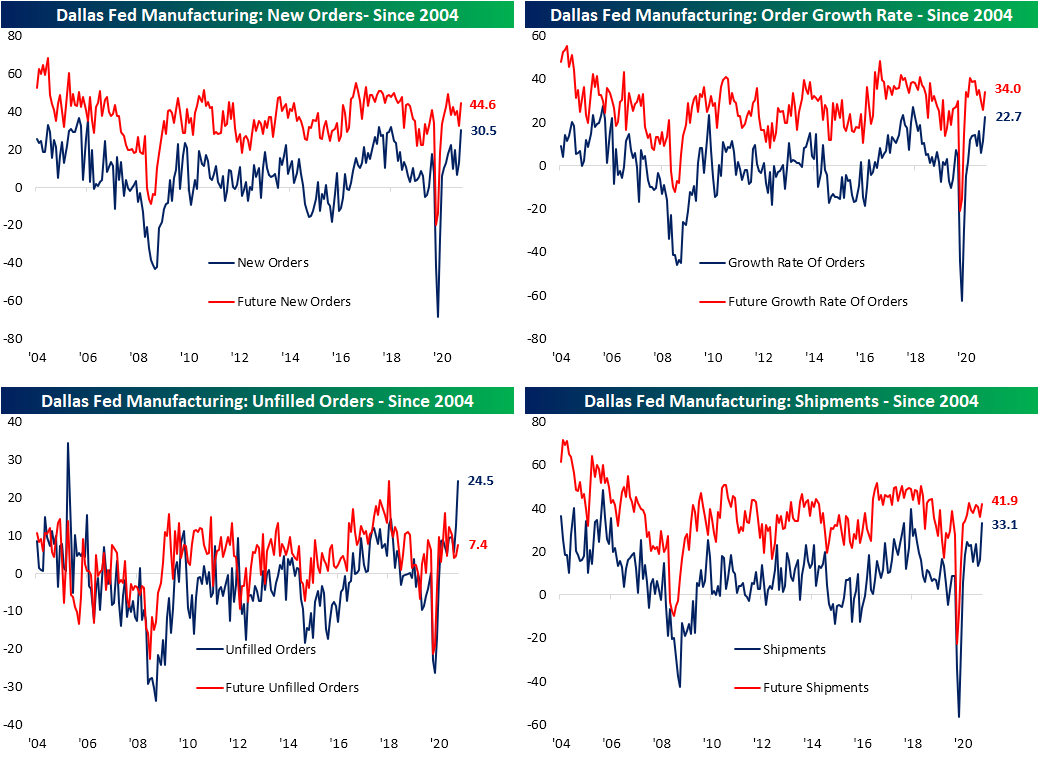 An even more impressive increase to gauge the effort being put in to meet that demand came from the indices for Production and Capacity Utilization.  Both indices surged to new all-time highs. 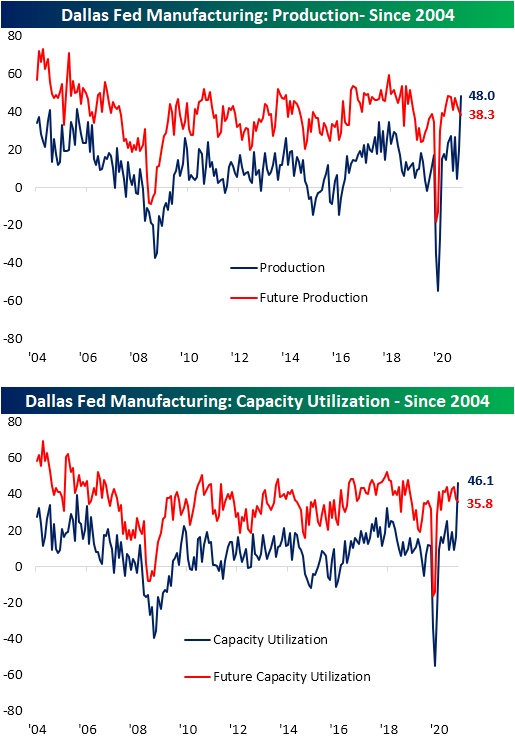 Even though the region’s manufacturers have increased production significantly, supply chains are showing signs of stress.  The index for Delivery Times soared by the highest amount in a single month on record to a new all-time high of 31.2, surpassing the previous record from September 2005 by almost 10 points. 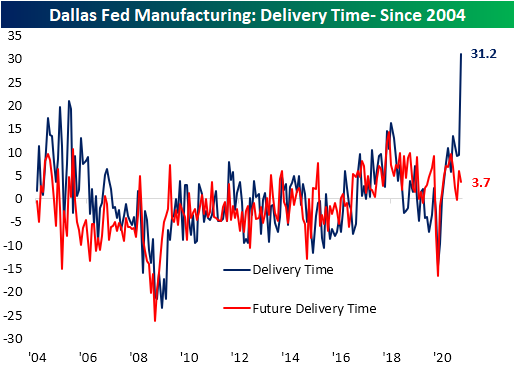 In addition to longer lead times, price growth is accelerating for both Prices Paid and Received.  Prices Paid rose to 66 this month which is the sixth-highest level on record and a level that has not been seen since July 2008. The index for Prices Received is actually at a slightly higher end of its range (98th percentile versus 97.5th percentile for Prices Paid), but it too is at the highest level since 2008. 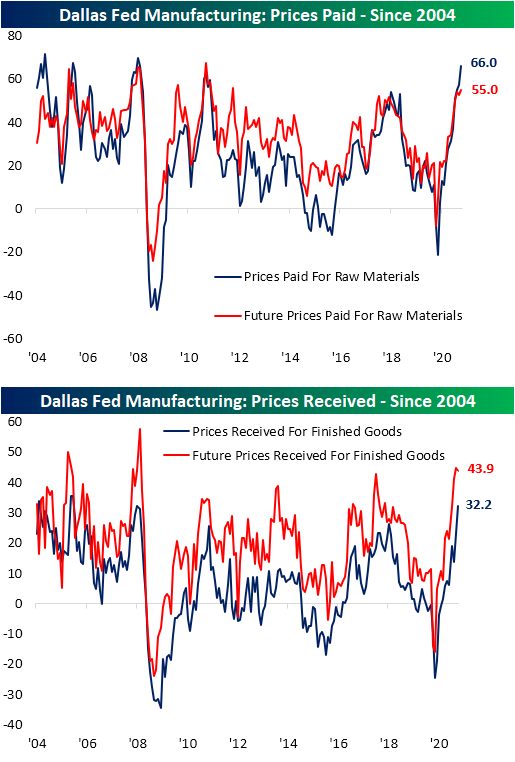 Finishing with a look at employment, although there was not a big pickup in the reading on firms increasing hiring, they appear to be making do with existing workers and are increasing incentives. The indices for Hours Worked and Wages & Benefits both saw increases in the top 5% of all months. In addition, Capital Expenditures also saw a big uptick in March. Click here to view Bespoke’s premium membership options for our best research available. 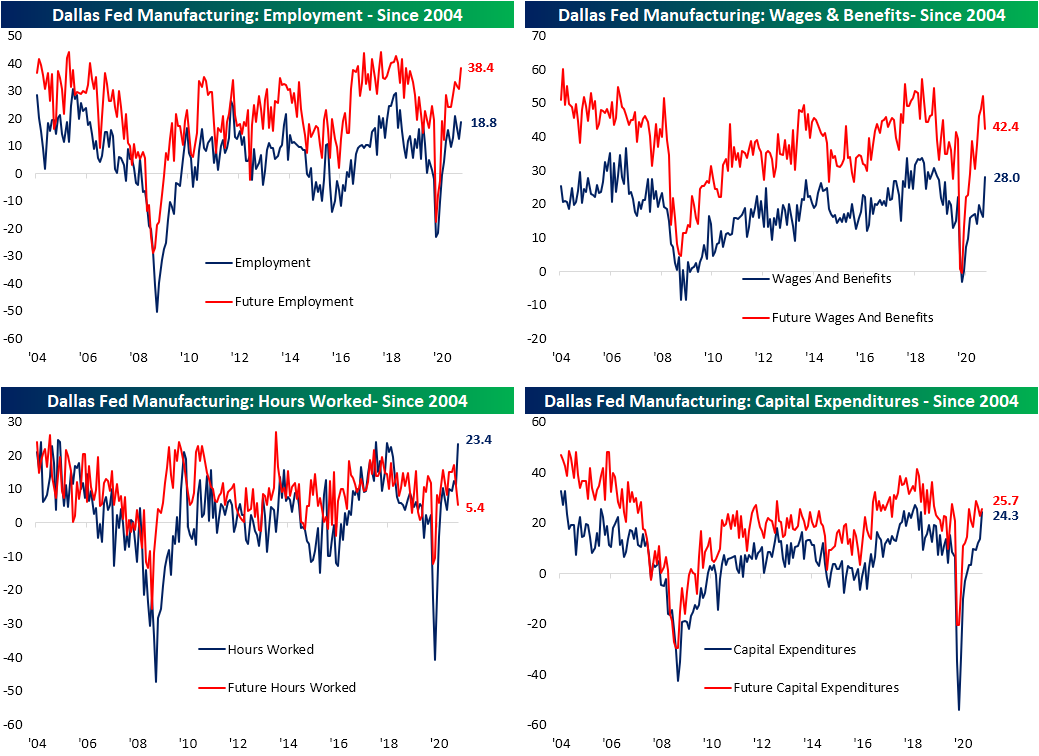