This morning, the Dallas Fed updated its monthly manufacturing survey. Like other regional Federal Reserve indices of late, May saw a substantial improvement from April though the index, as well as its components, remain at extremely low levels.  The 24.8 point increase from April’s -74 to May’s -49.2 was the largest one month increase on record but only leaves it in the 4th percentile of all readings.  Today’s reading was also well ahead of consensus expectations for a reading of -61.0. The headline number for the six-month outlook also rose by 24 points which is in the 98th percentile of all MoM changes. 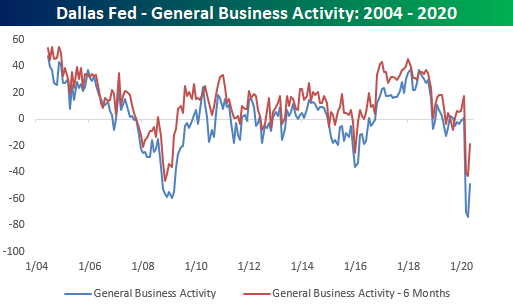 Given the improvement of the headline number, just about every component saw improvement with the exception of the index for finished good inventories which fell by 0.1 points.  But that does not mean every component is showing expansionary readings.  As with other regional Fed indices, conditions are still worsening just not at the same pace as in April.  While it may not necessarily be a positive, only raw material prices is showing an expansionary reading (above 0). But as for six-month outlooks, the picture is a bit more optimistic.

Take a few of the components for production and demand.  While current production and capacity utilization are still showing readings deep in contractionary territory, the indices for six months ahead surged to actually show expansionary readings this month. For production, that is the widest divergence between the six-month and current outlooks on record.  While not at a record, the spread between the six-month and current outlook for capacity utilization is also in the 99th percentile. The same can be said for new orders and new order growth rate as both spreads are in the 95th percentile of all readings.

For production and capacity utilization, the readings this month for six-month outlook rose to pretty much within range of the past several years. In other words, Texas area manufacturers expect production to nearly return to normal in six months. The six-month outlook for new orders, though, is not as optimistic with May’s reading still much further below its range, meaning demand is not expected to ramp back up to quite the same degree as production. 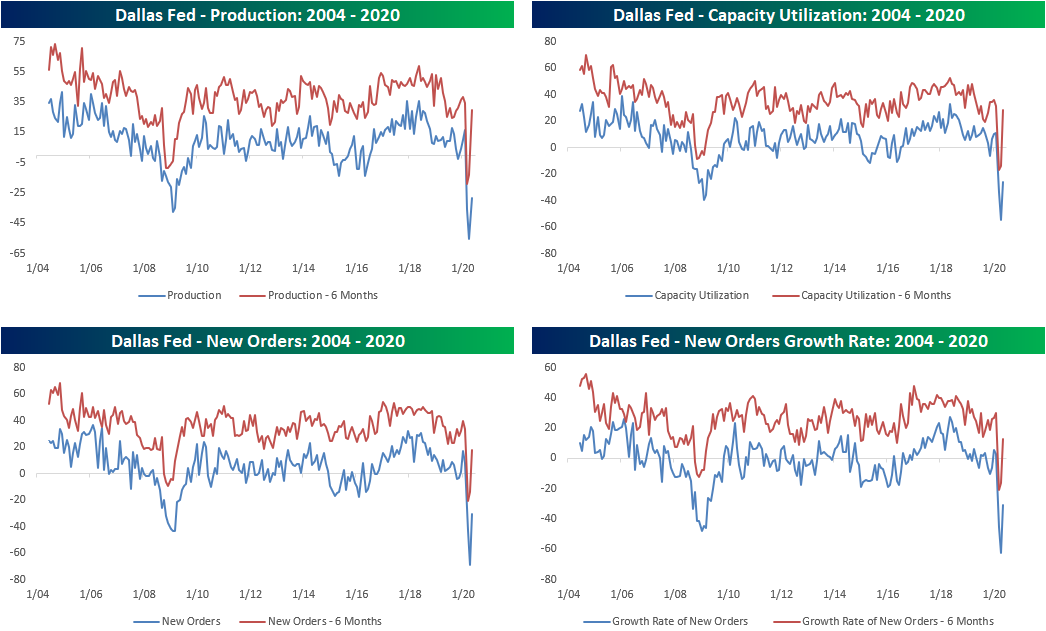 As for employment, these indices seem to echo weekly jobless claims of late.  Even though Texas manufacturers are still taking on fewer employees, the pace has improved from April. But there also does not appear to be much in the way of plans to expand workforces in the future. The six-month outlook for employment is still showing contraction, although hours worked are expected to rise.  Start a two-week free trial to Bespoke Institutional to access our interactive economic indicators monitor and much more.