Leading into today, the four already released results from regional Fed banks’ monthly manufacturing reports broadly showed a material slowdown in activity in August which we showcased in the most recent update of our Five Fed Manufacturing Composite in last week’s Bespoke Report. The fifth and final report out of the Eleventh District added more confirmation to that slowdown with its release this morning.  The Dallas Fed’s headline index peaked back in April at 37.3 and has declined each consecutive month since then including in August. In fact, this month’s decline was by far the most severe as the indicator dropped 18.3 points versus only 3.8 point declines the prior two months and a 2.4 point decline in May. The 18.3 point decline month over month also ranks as the eighth largest MoM decline on record and the largest since last March when it fell by a record 70.4 points. Another decline had been penciled in this month with the index forecasted to fall from 27.3 to 23, but the drop to 9 made for the eleventh biggest miss versus expectations since at least 2009. 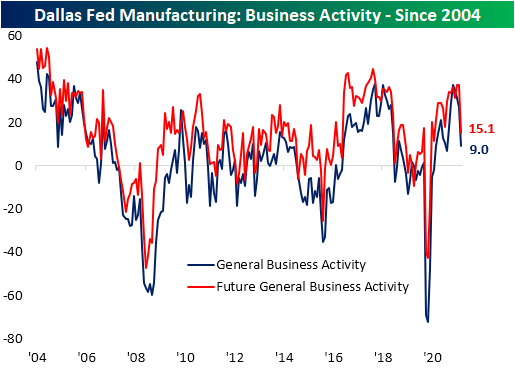 Looking across the various categories of the report, declines were broad across categories with only unfilled orders, inventories, hours worked, and prices paid higher relative to July.  Those declines are largely coming off of historically strong readings, though, with many in the top decile of their historical range last month.  Even after falling, every category is still above their historical median readings with many still in the upper deciles. In other words, manufacturing activity slowed but remains at solid levels.

Order growth and shipments are the areas to have seen the greatest moderation over the past few months.  In August, these indices all saw some of the largest declines in point terms and are now much less elevated than other readings.  For example, new orders are only in the 72nd percentile and Shipments are only in the 65th.  Those declines leave the indices at similar levels to the start of this year.  Again, the declines in these indices do not mean activity is contracting, but rather is decelerating meaning orders are still growing at a healthy level.  One example of this is unfilled orders.  With order growth at a solid clip, unfilled orders actually ticked higher, remaining at unprecedentedly high levels. We would also note, while businesses reported order backlogs are continuing to grow at historic rates, they do not foresee that to remain the case.  Expectations for the category dropped into negative territory this month (the only reading across current conditions and expectations to do so). 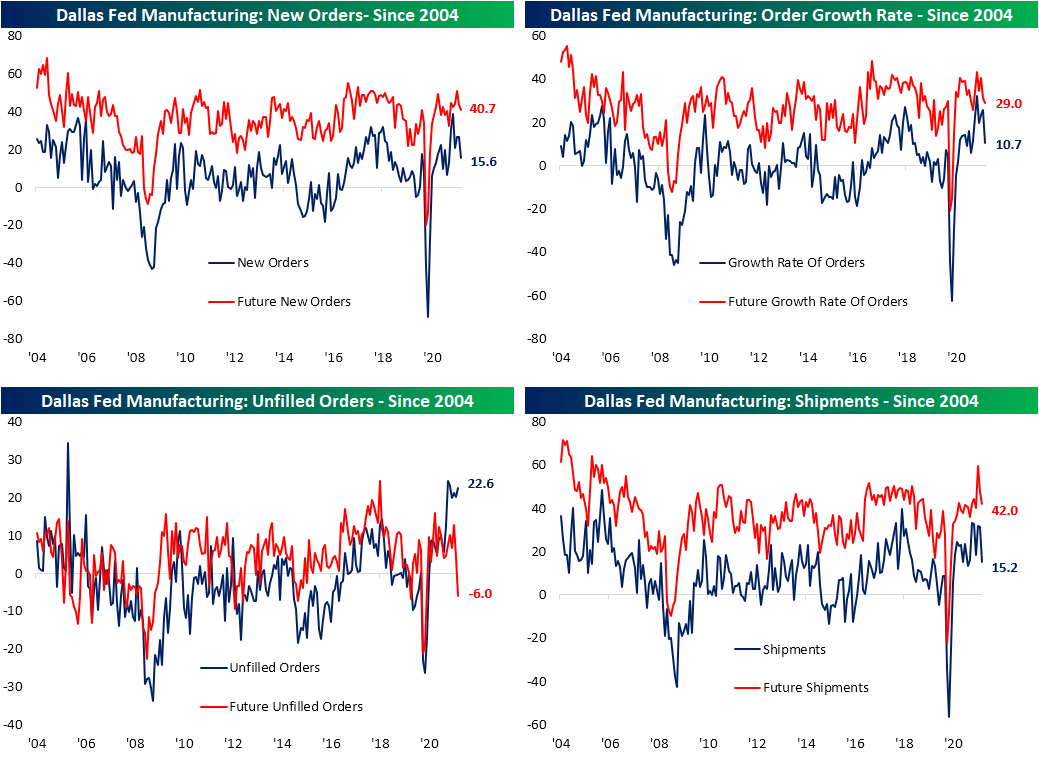 Prices and supply chains also appeared to have gotten some relief in August and could be playing a role as to why businesses appear optimistic to work off order backlogs.  While still right around record highs, prices received and delivery times were both lower. Unfortunately, while customers saw some price relief, prices paid were slightly higher. Meanwhile, Inventories are starting to grow again as the index rose 12.9 points to go back into positive territory for the first time since March 2019. 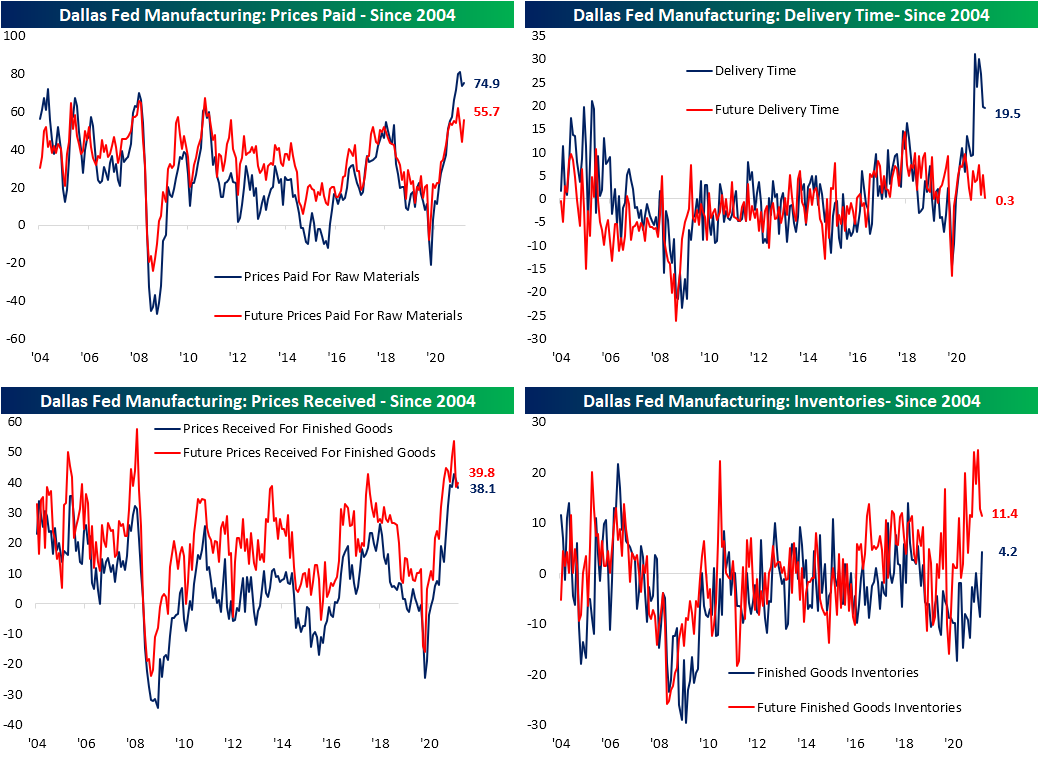 Employment-focused categories were a somewhat dour point of the survey.  Readings on Employment and Wages & Benefits were both lower in August which was met with a decline in capital expenditures.  On the bright side, current readings are still at healthy levels and the expectations index for wages and benefits actually hit a record. 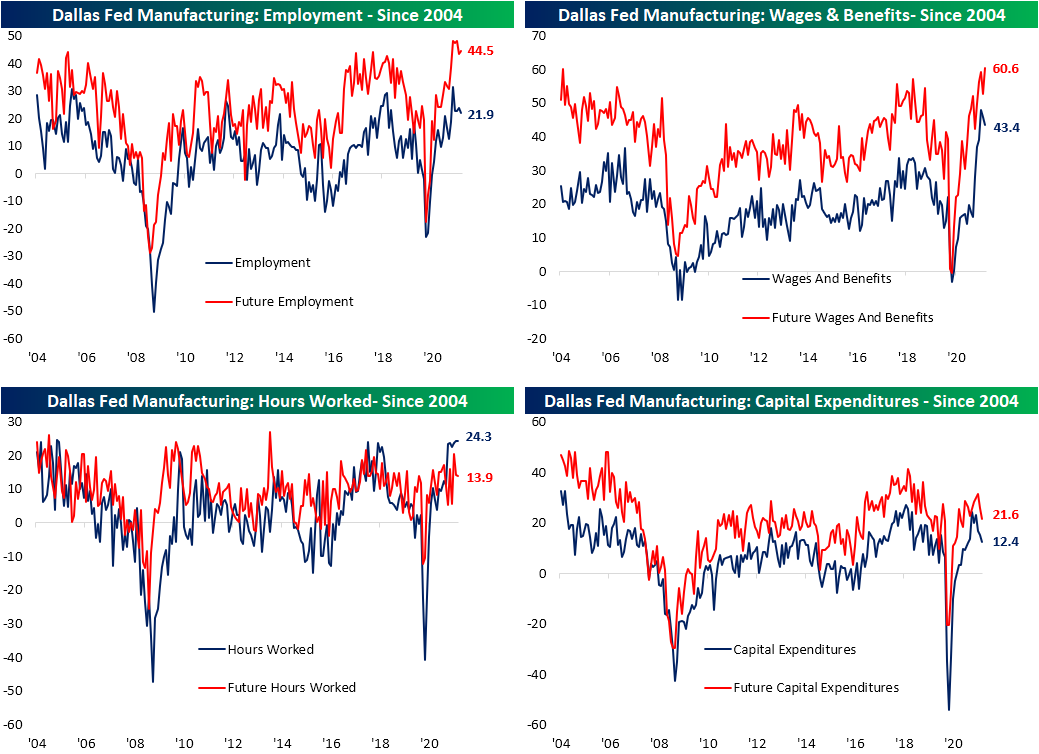 One other point to watch is uncertainty.  The Dallas Fed’s reading on uncertainty does not have much in the way of an extensive history, only dating back to the start of 2018, but the index did rise to 21.1 as COVID cases rose through the summer.  Those levels are well below the highs reached earlier in the pandemic, but are once again at the upper end of the past few years’ range. Click here to view Bespoke’s premium membership options. 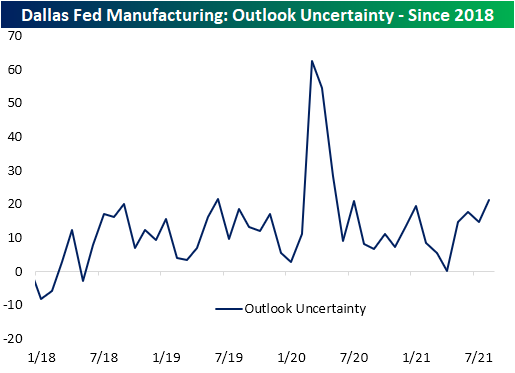