Released earlier this month, the New York and Philly Fed surveys on the districts’ manufacturing sectors both showed larger than expected declines.  Next up was the Dallas Fed this morning, and in a breath of fresh air, the results showed activity accelerated by more than expected as the headline reading rose ten points to 14.6. 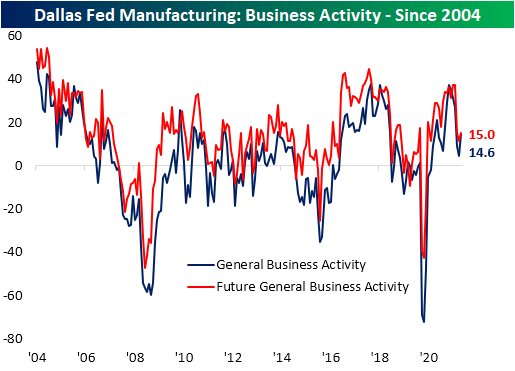 Last month, the index was not far off the historical median, and even after the double-digit increase in October, the index is not necessarily elevated in a historical sense. Some categories are similarly more middling within their historical ranges, but there are several others that remain in the upper few percentiles of readings like Prices Paid and Received, Wages and Benefits, Employment, and Unfilled Orders. The only index in contraction this month was that of Inventories. Additionally, breadth was positive with ten categories higher and six lower MoM.

Demand saw a modest uptick as New Orders came in at a slightly stronger rate. That led the Unfilled Orders index to erase most of September’s move lower as it is now back in the historically elevated range that was in place throughout the spring and summer. While it too moved higher month over month, unfilled orders expectations remained barely negative and significantly lower than the current conditions counterpart. As for another divergence between current and future conditions, the Shipments indices moved in opposite directions this month.  Current conditions hit the lowest level since January while expectations rocketed higher by 15.6 points.  That ranks in the top 3% of all monthly moves. Outside of the June high of 59.8, it also makes for the strongest reading in three years. 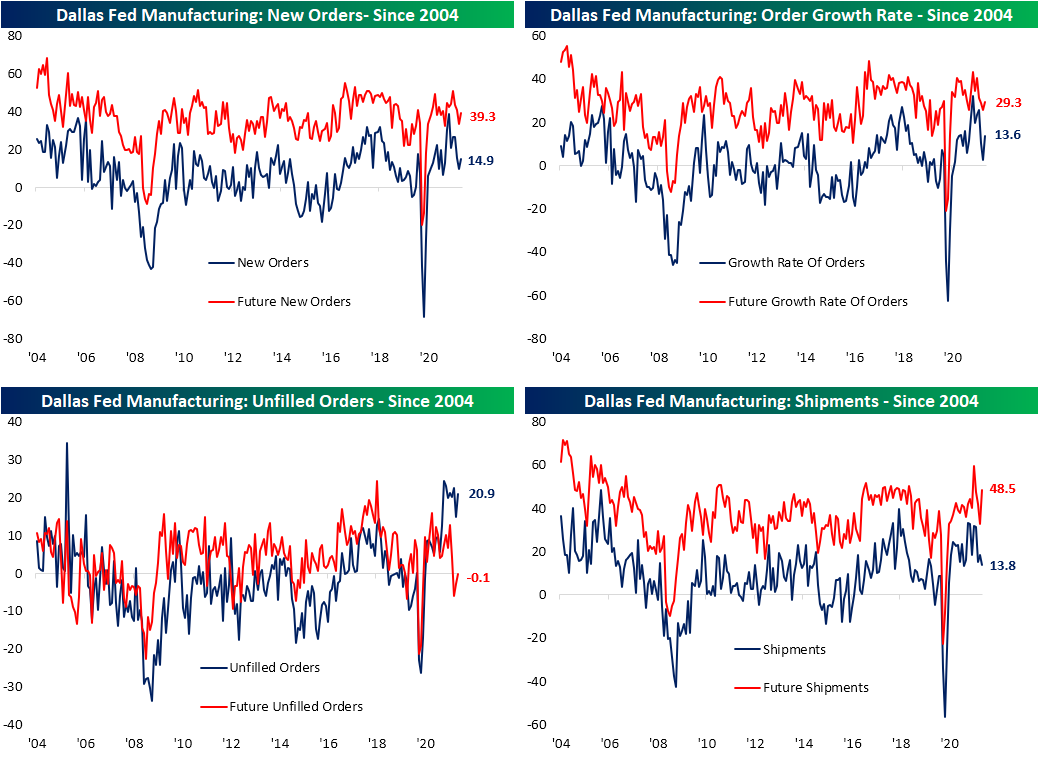 In other words, demand has bounced back a bit, but the region’s businesses are not getting products out the door at as fast of a rate (although that is expected to improve down the road). One likely reason for the weaker reading on shipments is a slowdown in production.  That index fell MoM alongside Capacity Utilization. Again, in spite of the decline in current conditions, there appears to be optimism that these readings will be stronger in the future. 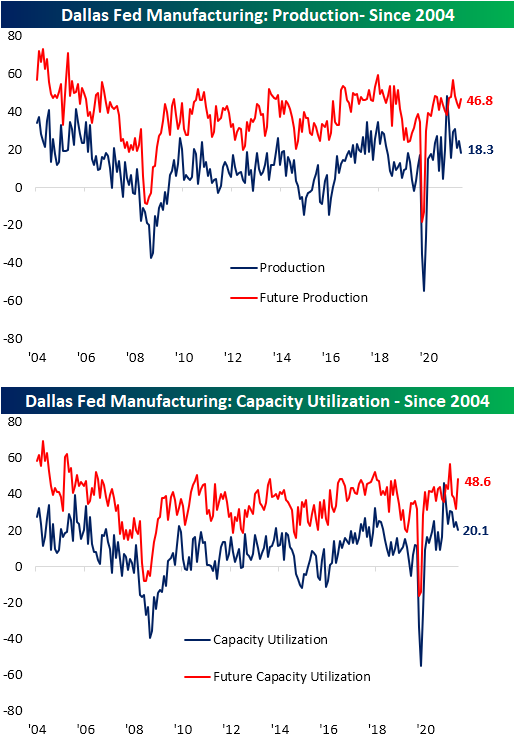 The same goes for Delivery Times which rose back to the highest level since June while expectations moderated. Given the higher lead times and deceleration in production amidst higher demand, the inventories index collapsed falling 12.2 points and ranking in the 3rd percentile of all month-over-month moves.  While those supply chain-type risks are still evident, the picture for Prices Paid is the same: stalled out albeit at historically elevated levels while Prices Received hit a new record high. 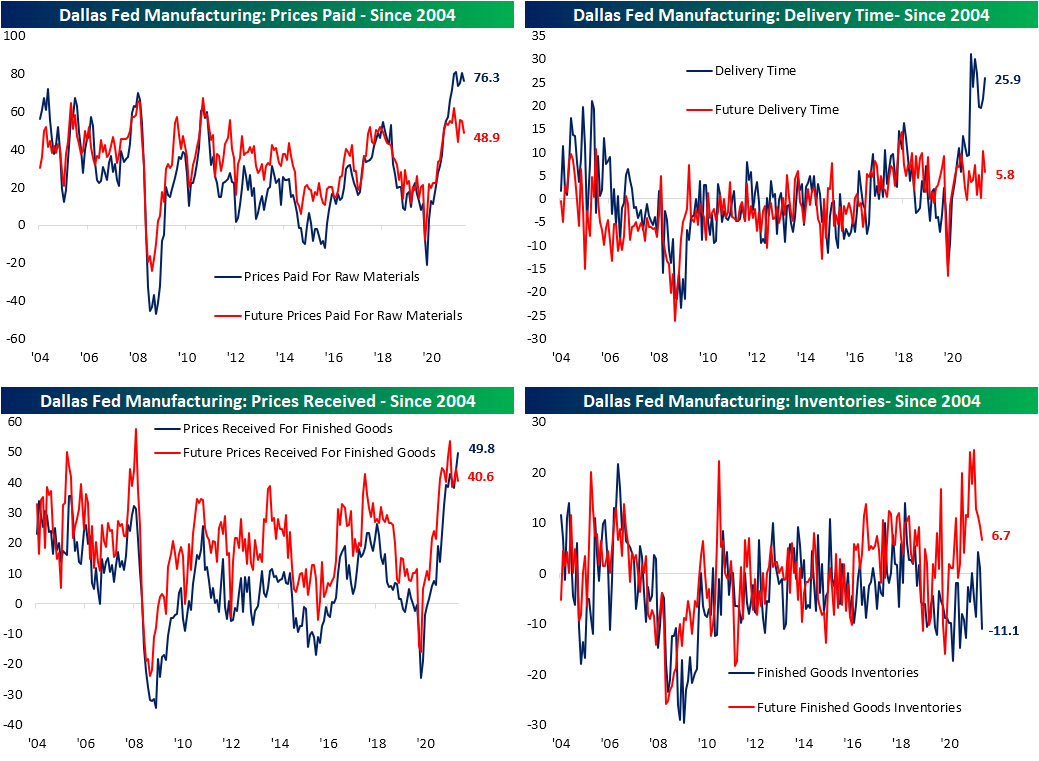 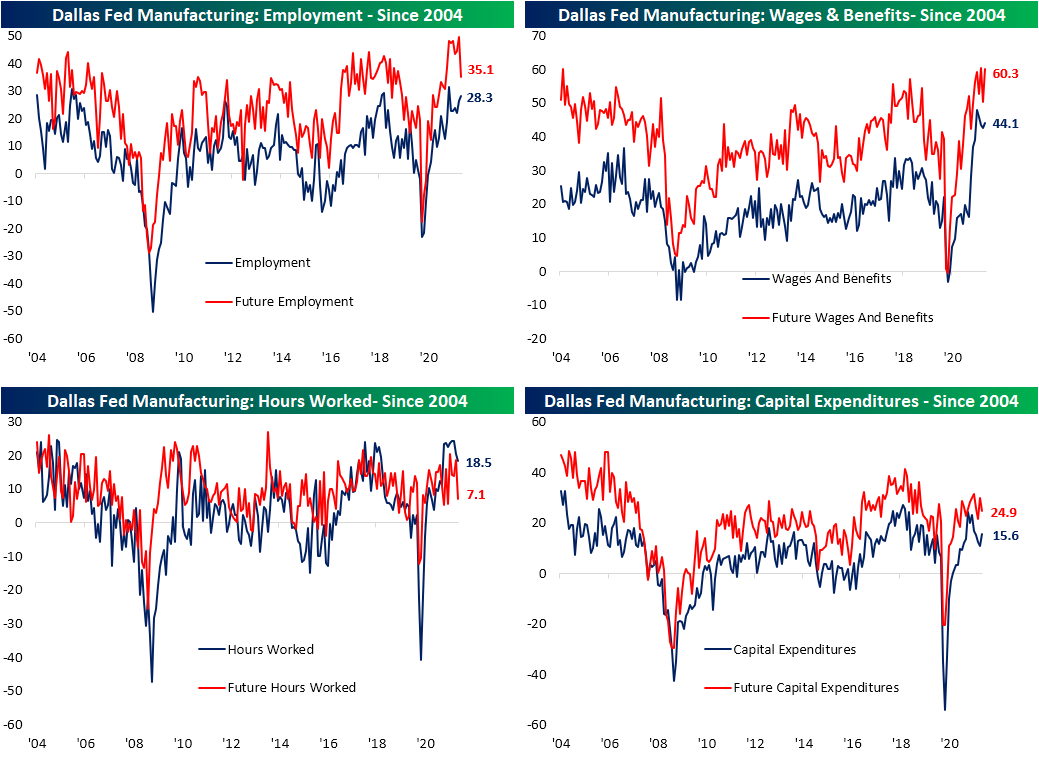