Last month, the New York Fed’s monthly manufacturing index fell to its weakest level since March of 2009. Fast forward one month and the headline reading has collapsed even further and more dramatically for the US region hit hardest by COVID-19.  The April reading was forecasted to come in at -35 which would have been the lowest level ever recorded.  Instead, it surpassed that by more than two fold coming in at -78.2 and experiencing its largest monthly decline on record in the process. While a net of over three-quarters of the region’s businesses reported declining current conditions, the outlook picked up slightly from last month.  Conditions six months out rose to 7 from 1.2 last month.

Given the massive decline in the headline number, many of the individual categories of the report were equally as bad. In addition to the headline number, New Orders, Shipments, Number of Employees, and Average Workweek all are at record lows and experienced their largest m/m declines on record.  While there were no record lows for the categories on expectations, most of those same ones are around the 1st or 2nd percentile.  Additionally, plans for Capital Expenditure and Technology Spending fell by their largest amounts ever. 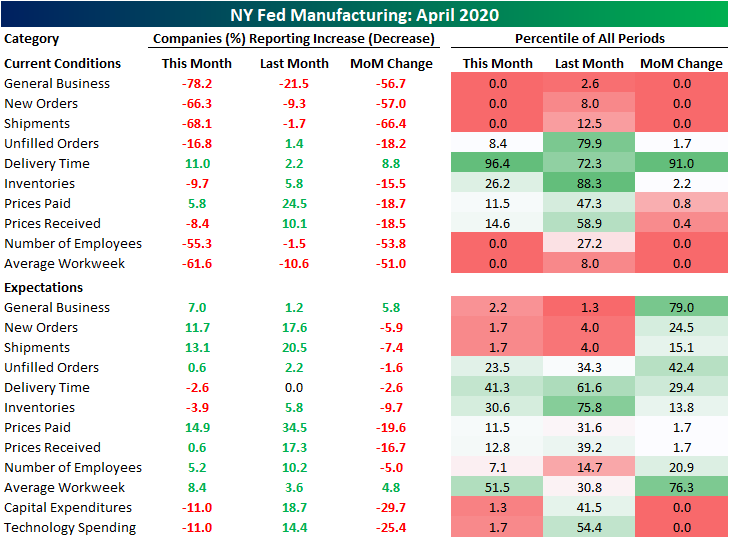 With business grinding to a halt, it appears focus has shifted from investment to simply staying afloat and cutting costs as the indices for capital expenditure, technology spending, and all tanked. For the first time since June of 2013 for Technology Spending and May of 2009 for Capital Expenditures, the NY Fed indices have tipped negative.  Both now stand at -11 indicating fewer companies are looking to expand on capital expenditures or technologies that would benefit operations.

Looking purely at recent jobless claims numbers, the employment side of this month’s Empire Fed report could not be expected to show much strength.  This month’s report showed 58.6% of responding employers reporting smaller workforces while only 3.3% saw an increase in employees.  Additionally, 64.7% of companies reported lower employee workweeks compared to 3.1% with longer workweeks. Those readings for Number of Employees and Average Workweeks at -55.3 and -61.6, respectively, are both record lows for current conditions.  As for expectations six months out, employers do not appear overly optimistic either. Although the reading on average workweek rose to 8.4, which is in the middle of the past few years’ range, expectations for number of employees fell to 5.2 which is its lowest level since August of 2016. Start a two-week free trial to Bespoke Institutional to access our interactive economic indicators monitor and much more. 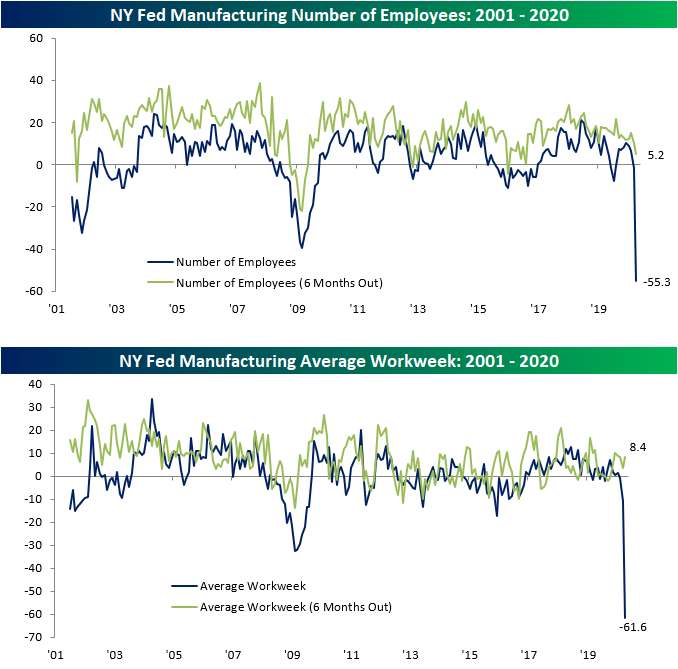