We’ve noted in detail the massive reversals seen in global equities over the last three months, but outside of equities, we’ve also seen some other massive moves.  One example is credit spreads between the yields of corporate and high yield bonds relative to Treasuries.

The top chart below shows the spread in yields between the B of A Corporate Index relative to Treasuries going back to 1997, and below that, we show the 50-day rate of change in the spread.  Heading into the COVID-crash, spreads on corporate bonds were less than 100 basis points (bps), meaning the corporate bond index was yielding only 1 percentage point more than comparable Treasury yields.  In the span of less than two months, though, spreads surged by more than 300 bps to over 400 bps.  Not since the depths of the credit crisis in 2009 had we seen spreads widen out more than they did in March. Just as notable as the level is the fact that the speed with which spreads widened during the COVID-crash was similar to the pace during the credit crisis.

While spreads were quick to spike during both crises, they narrowed nearly as fast both times.  Going back to 1997, the most corporate spreads have ever narrowed over a 50-day period was in June 2009.  Coming in at a close second place, though, the 50-day period ending in early June was nearly as extreme. 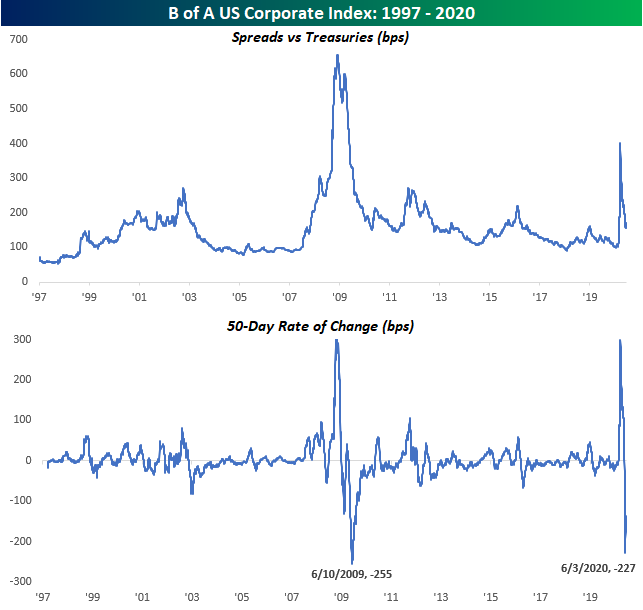 Similar to spreads on corporate bonds, the movement in spreads on high yield (junk) credit has been nearly as extreme.  While spreads on the B of A High Yield Master Index widened out by only half as much during the COVID-crash as they did during the Financial Crisis, the 50-day move ending in late March was easily more extreme than any other period outside of the credit crisis. 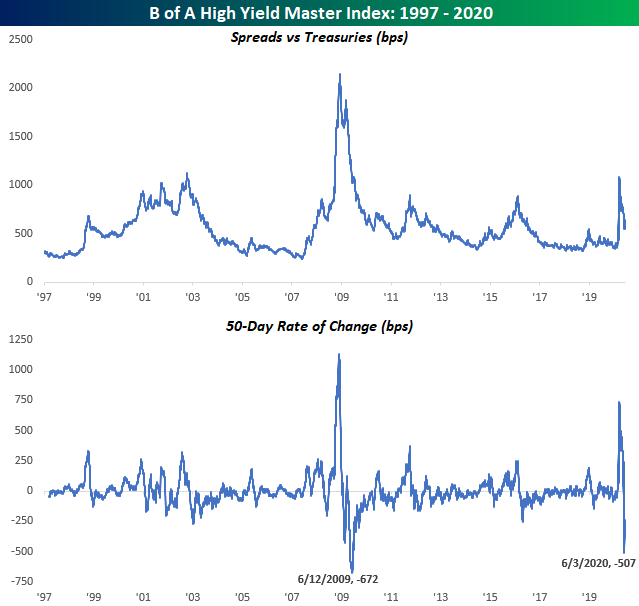 A shown in both charts above, the only time both corporate and high yield spreads narrowed by an amount anywhere close to the amount they narrowed from late March through early June was back in early June of 2009.  The chart below of the S&P 500 shows that point from the perspective of the S&P 500. That period in June 2009 was right in the early stages of what turned out to be a multi-year bull market. Given the similar tightening in the credit market now versus back then, should we assume a similar move for equities going forward?

After the last five months, we’ll be the first to say that anything is possible.  However, while there are plenty of similarities between the moves in credit markets over the last three months versus the first half of 2009, there are also important distinctions.  The most important of these has to do with where the S&P 500 is trading right now. The second chart below shows the historical levels the S&P 500 has traded at relative to its all-time high.  Even after the initial narrowing of credit spreads from March through early June 2009, the S&P 500 was still more than 40% off its all-time highs, and therefore still had a lot of climbing to do to get out of the hole.  Back in June 2009, to get back to its all-time high from October 2007, the S&P 500 still had to rally another 75%.  Today, it’s a much different picture as the S&P 500 is already within 10% of its February 2020 all-time high.  Could we be in the earlier stages of what turns out to be another long-term bull market?  Sure.  Will the magnitude of the gains be anything like the gains early on in the bull market that began in 2009?  It’s unlikely. Click here to view Bespoke’s premium membership options for our best research available. 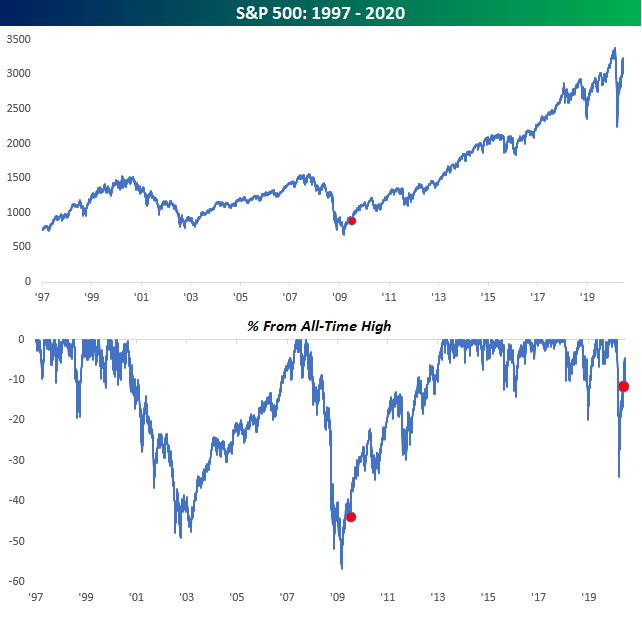