Crazy Moves in the Bond Market

The iShares 20+ Year Treasury Bond ETF (TLT) declined over 2% on Friday, which for a sector of the financial universe that is known for its safety, is a relatively rare occurrence.  Since the ETF’s launch in 2002, only 3.1% of all trading days have been gains or losses of at least 2%. Not only was Friday a big move for TLT, but it was also the third day this week that the ETF was up or down 2% on the trading day.  Talk about an uncertain environment!  With investors looking to forecast the path and intensity of rate hikes against a backdrop of high inflation, stronger than expected economic data (like Friday’s Payroll report) puts upward pressure on yields, while weaker than expected data suggests the economy is cooling off causing bonds to rally and yields to fall.

As mentioned above, three of the last five trading days have seen daily moves of plus or minus 2%.  Only two other periods throughout the history of TLT have seen a higher rate of 2%+ moves in TLT, those being August of 2011 and March of 2020. Click here to learn more about Bespoke’s premium stock market research service. 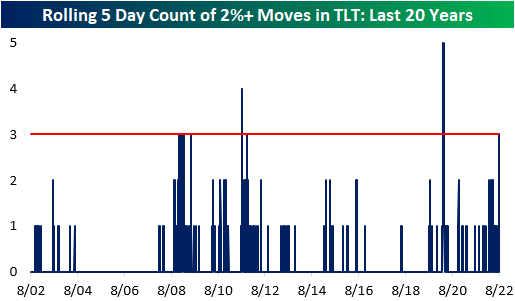 Since TLT was launched in 2002, there have only been 22 trading days in which the ETF had moved 2%+ three times over a trailing five-day period. Those occurrences are shown on the chart below and they are clustered around three different periods – the Financial Crisis, the US debt downgrade in 2011, and the COVID crash.  Needless to say, these were all very tumultuous periods in the markets and economy. 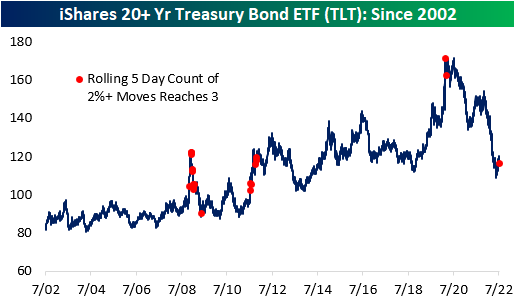 Interestingly, there have been seven years since 2002 in which TLT has had less 2%+ percent daily moves than we have had in the last five days!  For the entire year, this week’s three occurrences take the total number of 2% daily moves for TLT to 17.  There are still five months left in 2022, but if there wasn’t another day with a gain or loss of 2%, this year would still rank fourth in terms of total 2%+ moves.  Not only that, but if this year’s pace were to continue, it would put 2022 on track for a record twenty-nine 2% moves, surpassing the prior record of 22 from 2011. 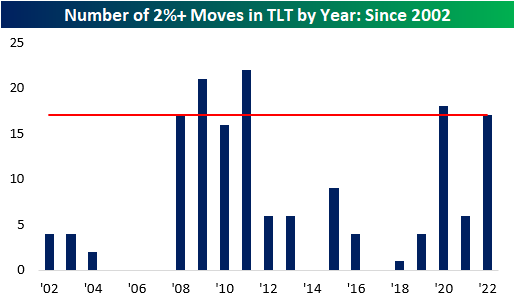