CPI vs Treasury and Dividend Yields

In order for an investor to generate real returns, the yield of an investment must exceed the going rate of inflation.  Using the 10-Tear US Treasury Note as an example, if it yields 5% and inflation is running at 3%, an investor’s real yield would be 2%.  The chart below shows the yield on the 10-year US Treasury along with Core CPI on a y/y basis going back 50 years.  Throughout history, inflation and interest rates have tended to track each other over time, and most of the time, the 10-year yield exceeded the y/y rate of Core CPI.  In fact, on a monthly basis, the 10-year yield has exceeded Core CPI more than 85% of the time.  The shaded areas in the chart show periods where Core CPI was greater than the 10-year yield.  Prior to the Financial Crisis, there were only two periods where it occurred, but since 2010, inflation has exceeded the 10-year yield much more frequently, although the current spread between Core CPI and the 10-year yield is the widest it has been since 1980. In other words, investors aren’t being compensated much for holding US Treasuries. 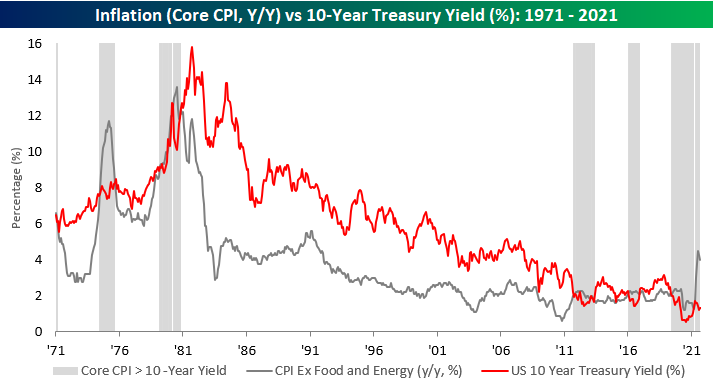 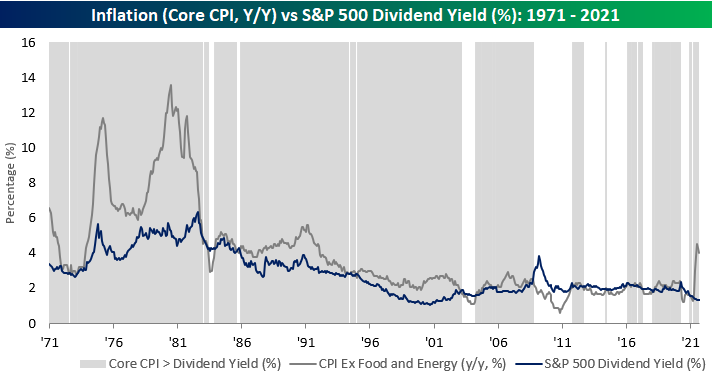 As mentioned above, it’s not common for Core CPI to exceed the yield on the 10-year.  While only 13% of months in the last 50 years have met that criteria, the S&P 500’s forward one-year performance was very strong, averaging a gain of 18.7% with positive returns nearly every time. In fact, the only time the S&P 500 had a negative 12-month return following a month that met this criteria was in the 12 months following 9/30/1980.  When Core CPI has exceeded the S&P 500’s dividend yield, the S&P 500 was still positive over the next 12 months nearly three-quarters of the time, but the index’s average gain has been a more modest 7.8%.

Lastly, scenarios like the current one where Core CPI is simultaneously higher than both the 10-year yield and the S&P 500’s dividend yield are very uncommon occurring in less than 10% of all months since 1970.  Following those periods, the S&P 500’s average change over the next 12 months has been 15.8% with positive returns over 98% of the time.

While forward 12-month equity market returns have been positive when Core CPI is higher than the 10-year yield, these returns don’t take into account the impact of inflation.  Real returns which we alluded to above will not be as strong, but the analysis does suggest that historically, equities have provided some degree of a hedge in a higher inflation environment.

As always, past performance is no guarantee of future results. 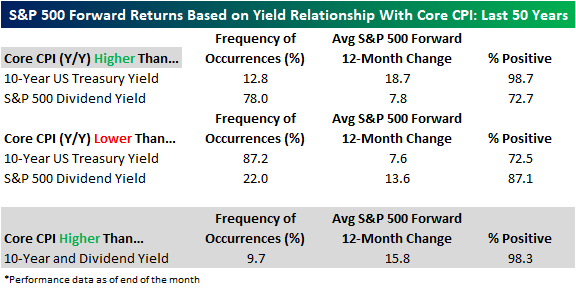