Covid-19 Still Not Showing in Claims

Given its more backward-looking nature, economic data has taken a backseat over the past few weeks, but this also makes more timely data like weekly jobless claims ever more important.  While risk assets continue to get hammered, weekly jobless claims have still yet to show any major layoffs as a result of the coronavirus.  In fact, claims were lower this week, falling to 211K compared to estimates of an increase to 220K.  Last week’s number was also revised lower by 1K (from 216K to 215K).  While there still has not been any new low, that leaves jobless claims basically in the middle of the past year’s range which historically is still a healthy level.

Although claims were lower this week, the four-week moving average has risen for a third consecutive week to 214K.  While at face value that may sound bad, there have been seven other such streaks, some of which ran for longer, in the past year alone.  Now at 214K, the moving average is not at any new high either, only at its highest level since late January.  In other words, the move higher in the moving average over the past few weeks has been far from dramatic and still is too early to call it a change in trend. 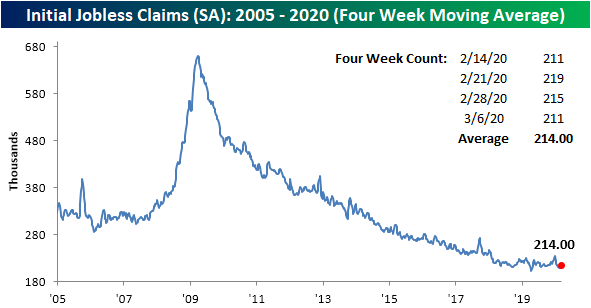 Non-seasonally adjusted numbers also remain at historically low levels with this week’s 200.2K print being the lowest of the current week of the year of this cycle.  That is also over 100K below the 333.06K average for the current week of the year since 2000.  Start a two-week free trial to Bespoke Institutional to access our interactive economic indicators monitor and much more. 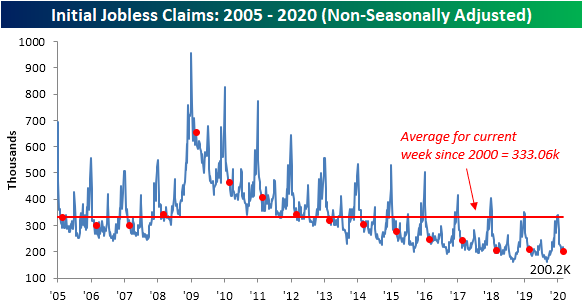