Similar to the final Markit readings for the month of February released this morning, the headline February ISM Manufacturing number has yet to show any major negative impact as a result of the coronavirus outbreak.  The headline index was expected to fall to 50.5 from 50.9, but the actual decline was larger down to 50.1.  Despite the weaker than expected reading, the ISM Manufacturing index remains at expansionary levels, and it is also a stronger reading than most months since the second half of 2019.

While the headline number may not flash any huge negative impacts from the coronavirus, the commentary section of February’s report makes frequent mention with respondents stating that the virus is “wreaking havoc” as it poses “a major supply chain risk.”  Likely due to the timing of the surveys predating the other major outbreaks around the globe, the comments mainly make note of the effects of the virus on operations in China.  In other words, seeing as this data is lagged a bit, the full effects of more recent outbreaks outside of Asia (namely China) are not likely to be fully reflected in the February report. 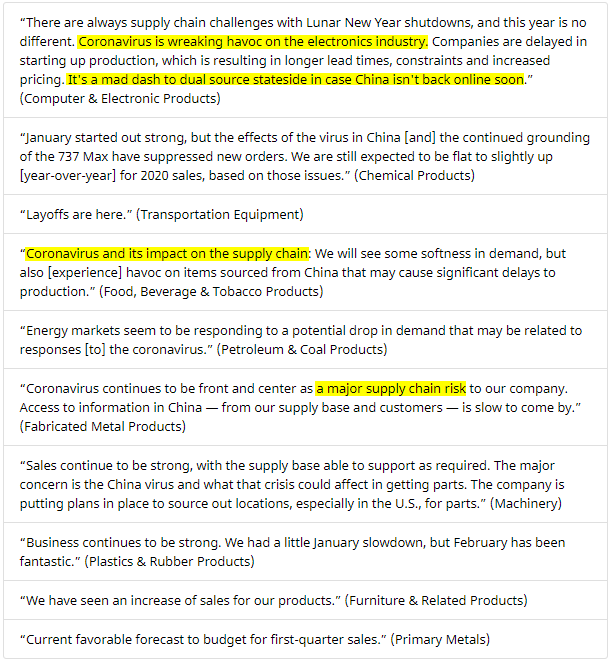 Breadth across the individual categories of the report was on the weaker side with only three improving from January and only two improving versus one year ago. These moves have brought the indices for New Orders, Prices Paid, and Imports all into contraction territory from expansionary readings in the prior month. Again, the headline index did not experience any major shifts as might have been expected as a result of Covid-19, but under the hood, some components are beginning to show a more prominent negative impact. 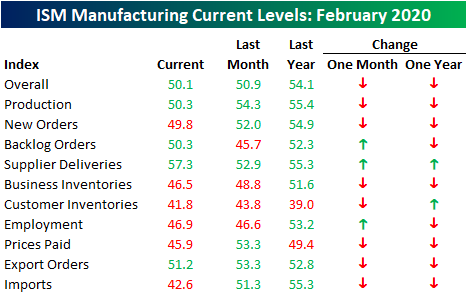 The worst of those declines were for Imports which fell from 51.3 in January to 42.6. As shown below, that is the weakest reading since the Financial Crisis (May 2009) when it dropped down to 38.5.  The 8.7 point decline was also the largest month over month decline on record in the data going back to 1989.  This drop is perhaps the most obvious result of Covid-19 disruptions. Shutdowns from the virus in addition to the New Years Holiday in China would have resulted in weaker trade activity.  Export orders are echoing this as they declined 2.1 points although that drop was not nearly as large as that of imports. 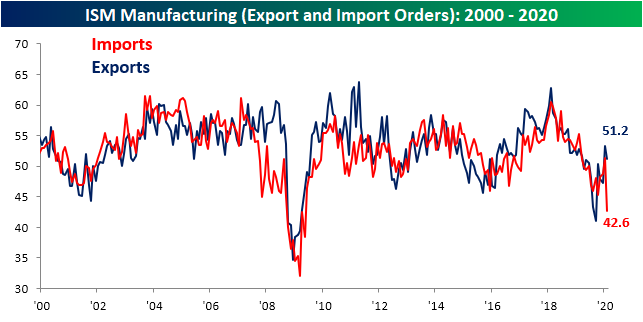 Supplier deliveries (readings above 50 indicate longer delivery times and under 50 indicate faster deliveries) are giving further evidence to negative impacts from the Coronavirus.  The index surged to 57.3 in February from 52.9 in January. That is the highest reading since November 2018 and was the largest one month increase since June of 2018. In other words, suppliers are struggling to deliver due to supply chain disruptions.

As suppliers struggle to deliver, backlogs have begun to grow with the index ticking up to 50.3. That is the first expansionary reading since April of last year. Start a two-week free trial to Bespoke Institutional to access our interactive economic indicators monitor and much more.