From Investopedia, a company’s PEG ratio “is used to determine a stock’s value while also factoring in the company’s expected earnings growth and is thought to provide a more complete picture than the P/E ratio.”  Taking it a bit further, “While a low P/E ratio may make a stock look like a good buy, factoring in the company’s growth rate to get the stock’s PEG ratio may tell a different story.  The lower the PEG ratio, the more the stock may be undervalued given its future earnings expectations.  Adding a company’s expected growth into the ratio helps to adjust the result for companies that may have a high growth rate and a high P/E ratio.”

Below is a look at how country “PEG” ratios look heading into 2020.  At the moment, China appears to be the most attractive country with a P/E to GDP growth ratio of just 2.44.  Forecast to grow 5.9% YoY, China has the highest expectations for GDP growth in 2020 while the current P/E ratio is one of the lowest of the countries shown.  Historically, China has frequently taken the number one spot on this list.  For Russia, growth is expected to be much more modest at 1.6% YoY, but the extremely low P/E of 6.68x earnings gives the country the second lowest PEG ratio.  Last year, Russia also had the second-lowest ratio of the countries shown, and it was one of the best performing stock markets in the world in 2019.

India has by far the highest P/E ratio of all the countries shown, but its 5.6% expected GDP growth gives it a PEG of 5.29, which ranks fourth overall.  For the US, its P/E ratio of 21.25 and estimated GDP growth of 1.8% gives it a PEG of 11.8, which is in the lower half of countries shown.  At the bottom of the list is Hong Kong with an attractive P/E ratio of 10.87 but woeful growth expectations of just 0.10%.  The weak GDP growth gives it a PEG of over 100!  That is a massive drop compared to last year when it was just 3.9.  Protests are clearly taking their toll.  Sign up for Bespoke’s “2020” special to read the “International Markets” section of our 2020 Outlook report.  We cover a number of additional fundamental, technical, and economic comparisons for countries around the world. 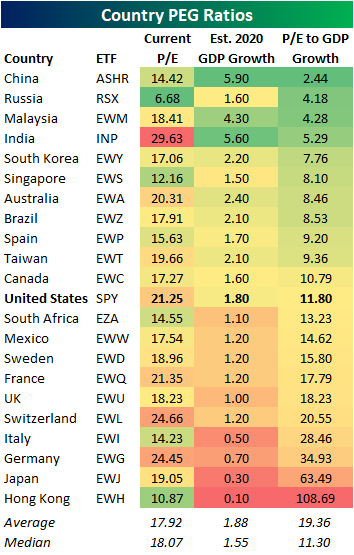