For most major global equity markets, at some point this Fall a 52-week low has been put in place, with significant rallies since then.  As shown below, of the 22 ETFs tracking key country stock markets in our Global Macro Dashboard, the average gain off the low is now 22%. The largest of these rallies have come from Germany (EWG), Italy (EWI), and China (MCHI), which have all risen over 30%.  For China, that gain has come in the shortest span of time with October 31st being its low, whereas Italy and Germany’s lows were a few weeks further back.  One other interesting note regarding China is currently it trades only slightly above its 50-DMA whereas a majority of other country ETFs are in or at least near overbought territory. On the other end of the spectrum, the US (SPY) has experienced the most modest rally having only risen 13.82%.  India (INDA) is close behind with a 13.89% gain, although it bottomed before the rest of the world with its 52-week low being back on June 17th. 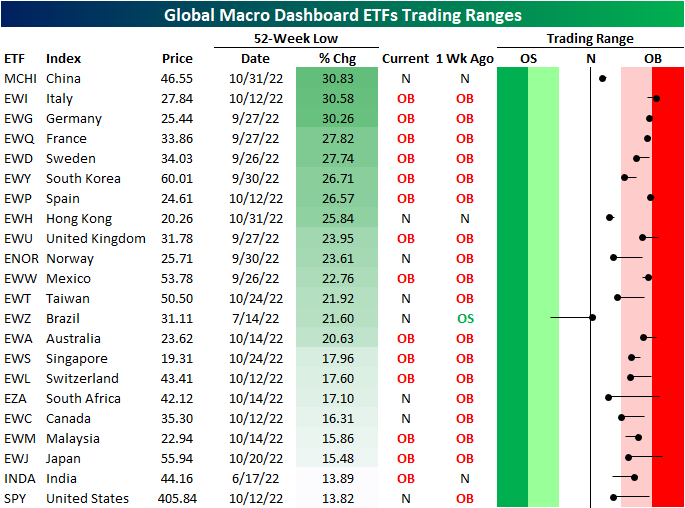 While much of the rest of the world has experienced a larger rebound off the lows, year to date performance between the US (SPY) and global equities excluding the US—proxied by the MSCI All World ex. US ETF (CWI)—is now very similar.  The US is marginally in the lead with a -14.12% YTD total return versus a 14.45% drop for CWI.  At the lows at the end of Q3, international markets were underperforming the US by more than 5 percentage points, but that gap has been closed during the current rally.  Click here to learn more about Bespoke’s premium stock market research service.  As always, past performance is no guarantee of future results. 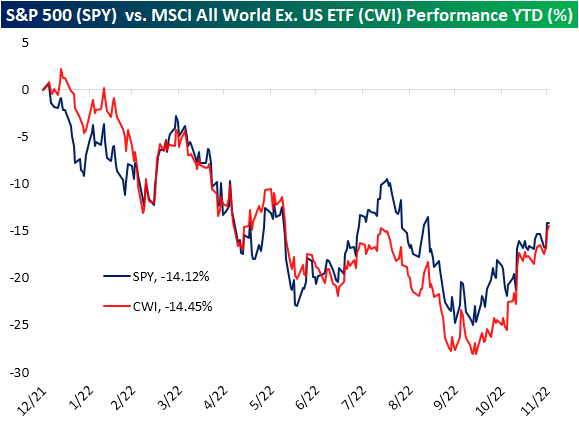