There is another commodity that can now be added to the list of assets that have experienced wild swings this year. Reminiscent of lumber earlier this year or natural gas more recently, in the agriculture space, cotton has experienced an explosive move to the upside.  As shown below, front-month futures were already seeing a solid move higher since last year’s lows. But in the 12 trading days since the recent low on September 20th, cotton has surged over 20%.  As of this writing, that leaves the commodity at the highest level in a little over a decade as it has broken out above the May 2014 and June 2016 highs.

Going back since 1990, there are not many examples of cotton rallying over 20% in the span of only 12 sessions; especially in more recent history. As shown in the second chart below, this is the first +20% rally in 12 days since June 2012 when cotton rose 28.38%. Going back over the decade leading up to that occurrence, there were a handful of other rallies of the same size if not larger. 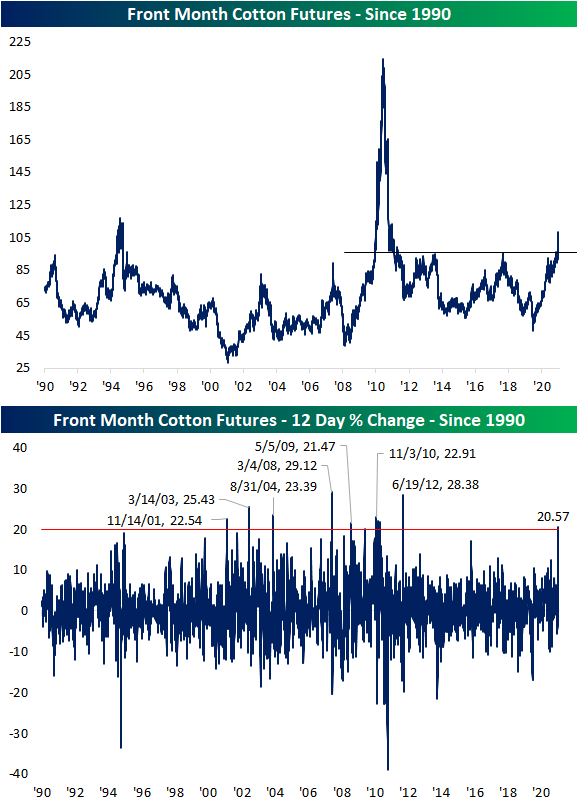 Given the rapid rise in cotton prices, the commodity is now very extended relative to its 50-DMA. In fact, there has only been one time since 1990, March 2003, when cotton was as extended above its 50-DMA as measured in standard deviations.  With that said, there were some instances in which the overbought reading was at least similar though.  For example, November 2017, July 2016, March 2008, and December 2006 also saw cotton move to over 3.9 standard deviations above its 50-DMA as is the case today. 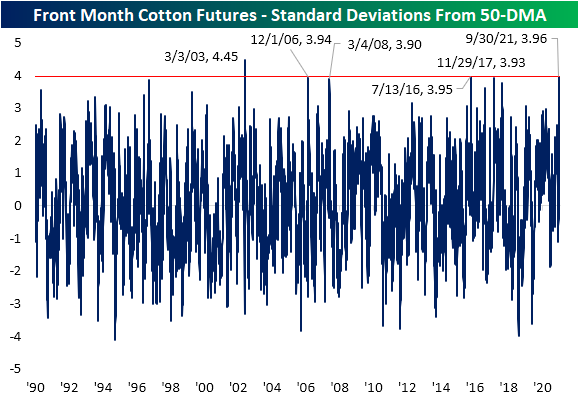 Given the surge in prices, speculator positioning around the commodity is overwhelmingly long.  Data from the CFTC’s Commitment of Traders report—which we also reviewed with regards to other assets in last night’s Closer—shows the percent of open interest for cotton futures is currently 40.97% net long.  That is the highest and first reading above 40% since the week of July 2018. It also ranks in the top 2% of all readings on record going back to 1986. In other words, speculators broadly have held a positive outlook on cotton and they have been proven correct. 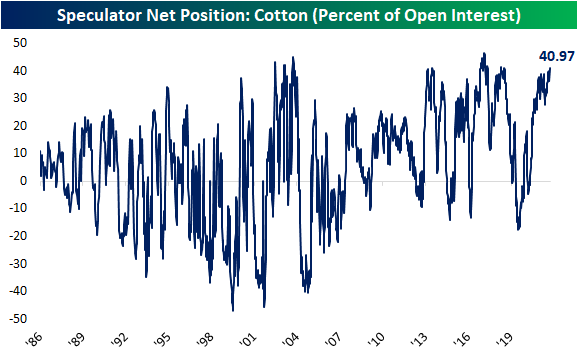 As for agricultural commodities more broadly, cotton has not necessarily boosted the aggregate space. The Invesco DB Agriculture Fund (DBA) which tracks 10 agricultural commodities including cotton has remained in consolidation over the past several months with a failed attempt to break out of that range only a couple of days ago.  As for why the surge in cotton has not also led to a surge in DBA is that the commodity has a relatively low weighting accounting for just over 3% of net assets tying it with Feeder Cattle for the smallest weighted future of the ten tracked by the fund.   Click here to view Bespoke’s premium membership options. 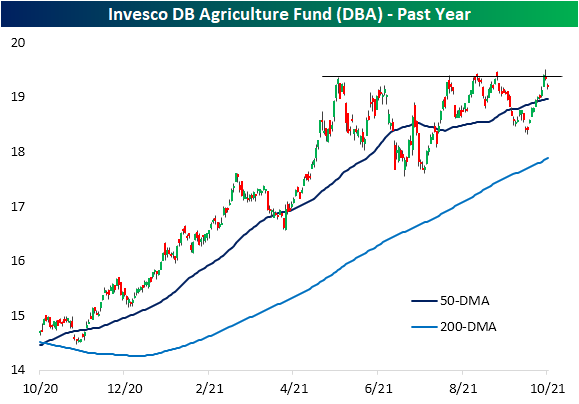