With the Nasdaq entering a correction in under a week and the S&P 500 dropping just over 7% from last Wednesday’s closing high to Tuesday’s low, investor sentiment has understandably taken a hit.  After a four-week stint in which the percentage of investors reporting as bullish in the American Association of Individual Investors (AAII) survey stayed above 30%, this week less than a quarter of respondents are bullish.  At 23.71%, bullish sentiment is at its weakest level since the first week of August when it was 23.29%. Additionally, the 7.09 percentage point decline was the largest one week drop in bullish sentiment since mid-June when it fell 9.91 percentage points. 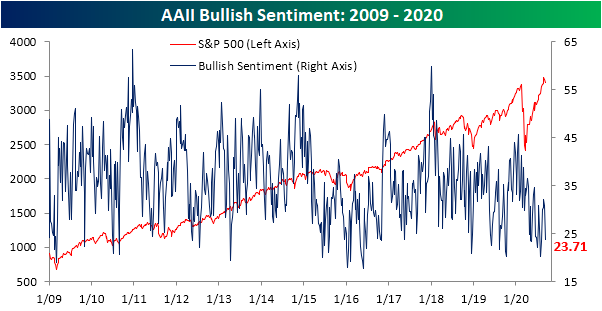 The decline in optimism was obviously met with a similar-sized increase in pessimism.  The percentage of investors reporting as bearish rose 6.68 percentage points this week to 48.45%.  That is the highest reading since the last week of July when bearish sentiment stood slightly higher at 48.47%. It was also the largest one week gain to bearish sentiment since June 18th. As shown in the chart below, that is at the high end of the past few months’ range but is still off the highest readings of the pandemic when more than half of respondents reported as bearish. 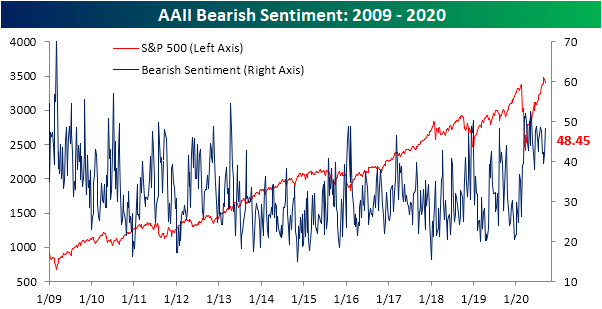 With the big moves in bullish and bearish sentiment, the bull-bear spread moved deeper into negative territory (which it has been in for a record 29 weeks now) falling from -10.97 to -24.74 this week. That brings the spread back to similar levels to the end of July. Since the pandemic began, there have only been five other weeks that the spread has been lower: the last week of July, June 25th, May 7th and 14th, and April 23rd. In other words, bearish sentiment continues to dominate. 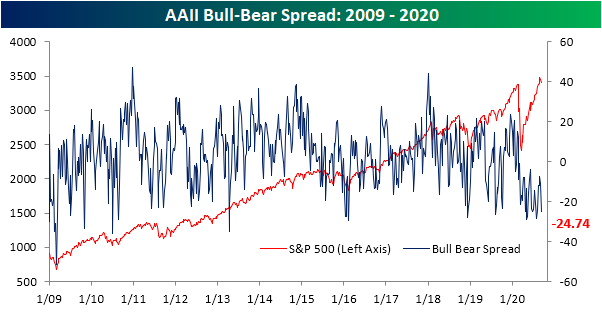 Meanwhile, over a quarter of respondents are neutral on the market. 27.84% of respondents to the AAII survey reported as expecting no change in the S&P 500 over the next six months which was little changed from 27.43% last week and is basically right in line with the average of 25.77% since the bear market low in March.  Click here to view Bespoke’s premium membership options for our best research available. 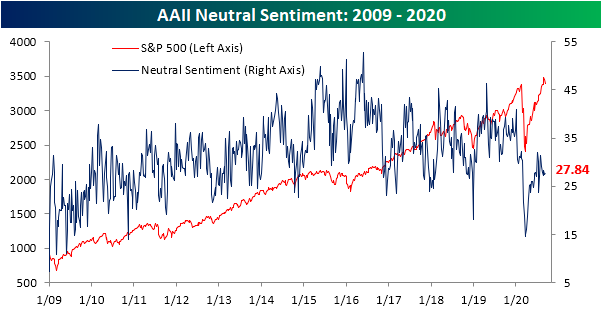