Continuing Claims Streak Of Declines Back On The Ropes

Over the past few weeks, initial jobless claims have seen a significant improvement falling to pandemic lows in the 500K range.  Even with last week’s reading getting revised up by 19K to 566K and this week’s print missing expectations coming in 3K above estimates of 550K, the picture of the US labor market broadly remains positive.  This week marked the first streak of three sequential weekly declines since November. At 553K, claims are also at the lowest level since the first half of March of last year and are below the peaks of past recessions. 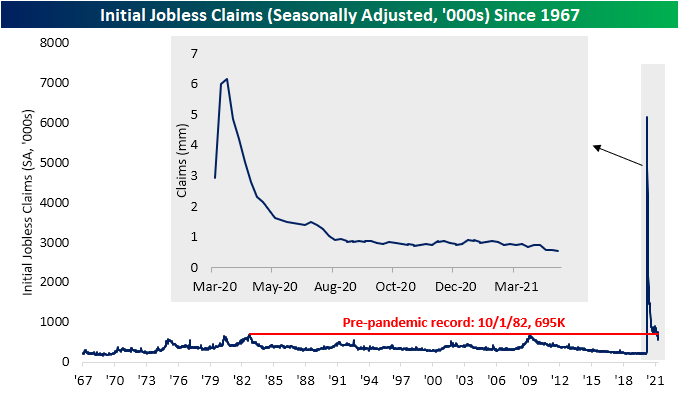 Including the other major unemployment insurance program, the Pandemic Unemployment Assistance Program (PUA), the picture is the same.  Non-seasonally adjusted claims between the regular state programs and PUA claims are at a new low on a combined basis dropping below 700K for the first time. Regular state claims have consistently accounted for a majority of initial claims and that has increasingly been the case over the past few months.  PUA claims dropped 11.6K week over week to a new low of 121.75K which only accounts for roughly 17.5% of all initial claims.  That compares to an average of 32.23% since the program first began to be tracked last year. 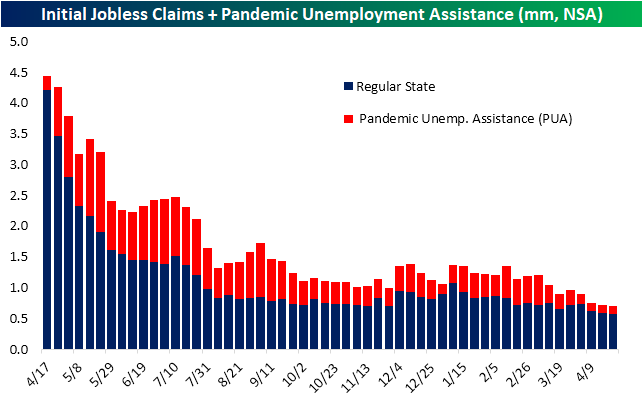 In spite of the pace of new claims entering the system having slowed recently, continuing jobless claims data has plateaued.  Last week, we noted how a revision had brought back to life a record streak of consecutive sequential declines in continuing jobless. This week that streak once again looks like it has come to an end as continuing claims rose 9K to 3.66 million.  Although that streak is over (barring any revisions down the road), it is in the context of a massive and rapid improvement in claims in a relatively short span of time.  For starters, in the 50 weeks since the high in claims last May, there have only been seven weeks including the current one in which claims did not experience an improvement. Additionally, since falling below the 6.635 million level that had marked the pre-pandemic record high in claims from the Global Financial Crisis, claims have dropped another nearly 3 million in just under 6 months.  By comparison, after the GFC peak, it took 128 months or over two and a half years for claims to move from that peak to a similar level as to now. 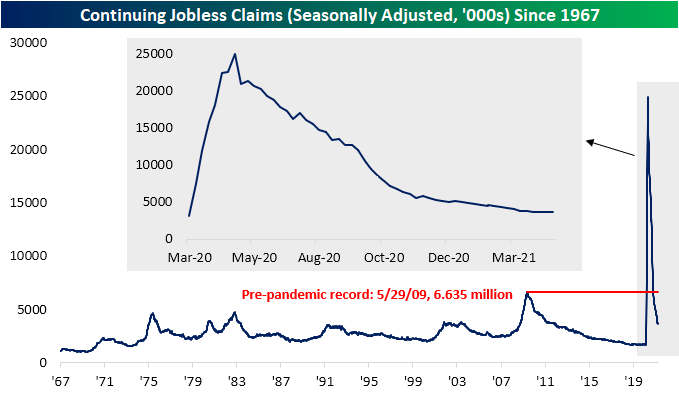 Including all programs adds some lag to the data meaning the most recent data is for the week of April 9th.  Continuing claims across all programs fell 846K to 16.587 million. That is the second-lowest reading of the pandemic behind the first week of the year’s 16.05 million reading, although that week comes with the caveat of some irregularities on account of the timing of the signing of the spending bill. Essentially every program saw lower claims counts with the biggest drop coming from Pandemic Emergency Unemployment Compensation (PEUC) which fell by over 400K.  Since the fall, this program as well as others that extend benefits beyond normal expiration have accounted for an increased share of total claims meaning a growing number of the unemployed have been facing long-term unemployment. Over the past several weeks, though, this reading has also been improving.  Click here to view Bespoke’s premium membership options for our best research available. 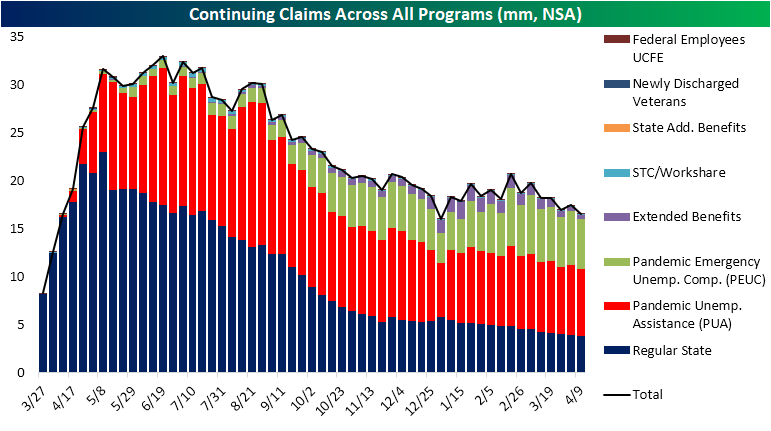 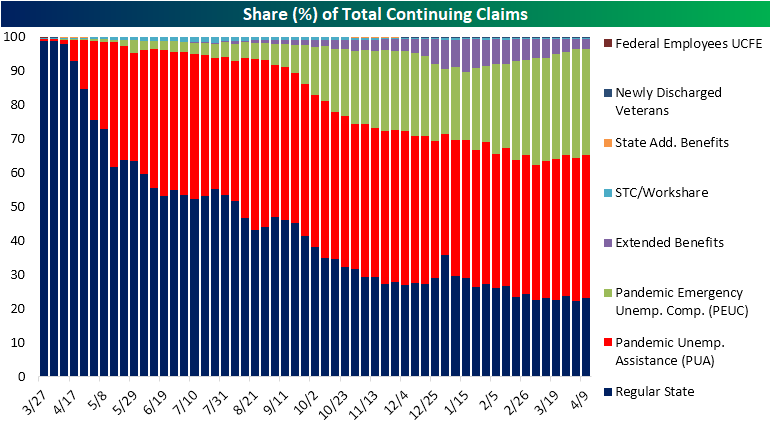