Ranging from today’s retail sales report to homebuilder sentiment to the earnings of some of the largest retailers like Target (TGT) and Lowe’s (LOW), the economic and earnings calendar this week has given Consumer Discretionary stocks plenty of news to digest. Outside of the spring to late summer, the sector has generally been on the decline relative to the S&P 500 in 2022. Last week, that relative strength line bounced right as it reached the late May low. However, over the past few days, it has been resuming its move lower, meaning it is back to underperforming.

While on a sector level the relative strength line has been falling, drilling down to the industry group level, there has been more variation. For example, even with some positive responses to earnings from the likes of Home Depot (HD) or Lowe’s (LOW), the retailing industry has seen a sharp grind lower in its relative strength line versus the S&P 500.  Similarly, autos have seen a turn lower although it has been underperforming the S&P for a longer period of time since the early fall. Meanwhile, Consumer Durables and Appliances (which includes stocks like the homebuilders and home appliance makers) has been moving higher. That move has paled in comparison to the relative strength of Consumer Services stocks (restaurants, cruise lines, hotels and resorts), though, as that group’s line has surged over the past couple of months. 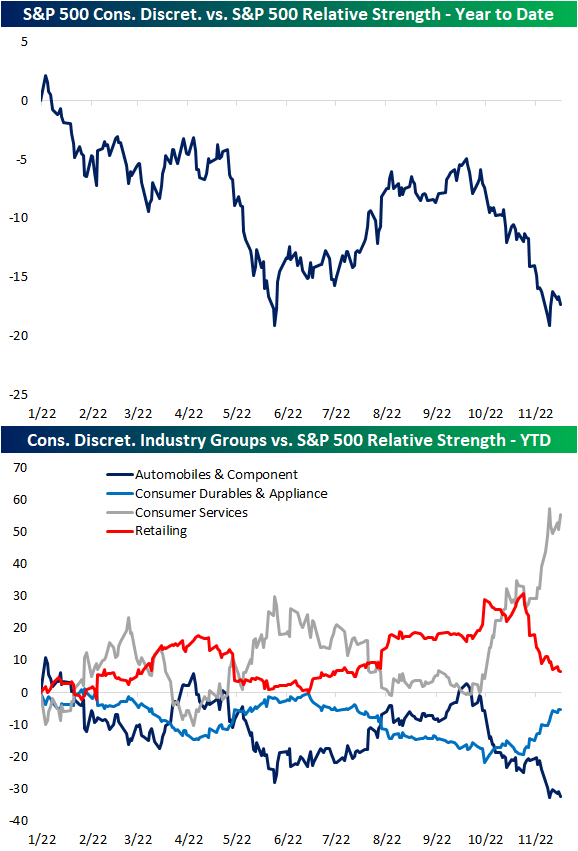 As mentioned above, retailers in the Consumer Discretionary sector have been underperforming the S&P 500 lately but there is another group of retailers in which performance has been more solid.  The Food & Staples Retail industry is a component of the Consumer Staples sector, and its relative strength line has been trending higher since the spring lows.  In fact, after the past week’s move higher thanks in part to a strong response to Walmart (WMT) earnings, its relative strength line is approaching some of the highest levels of the past year, entirely recovering the massive drop from May in the wake of another, much more negatively received, WMT earnings report. Click here to learn more about Bespoke’s premium stock market research service. 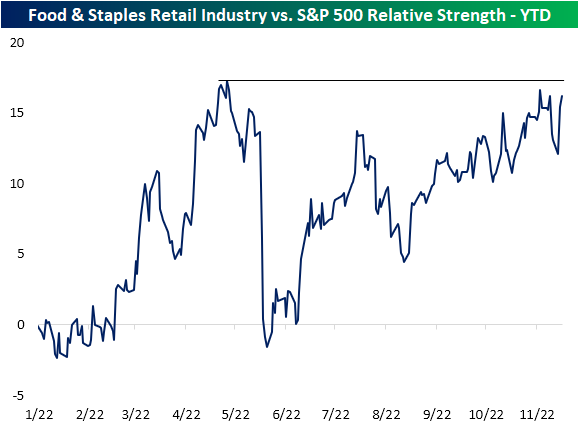