As we noted in last night’s Closer, some of the biggest members of the Consumer Discretionary sector by market cap like Amazon.com (AMZN) and Tesla (TSLA) have been pulling more than their fair share for the S&P 500’s gains recently. That also means the sector itself has been on a stellar run having risen over 5% in the past five days; the best five-day run since a 7.18% gain this past March.  While currently elevated, this week’s move has marked a dramatic break out above the summer high.   Additionally, its relative strength line versus the broader index has also made a significant breakout from the past year’s downtrend. 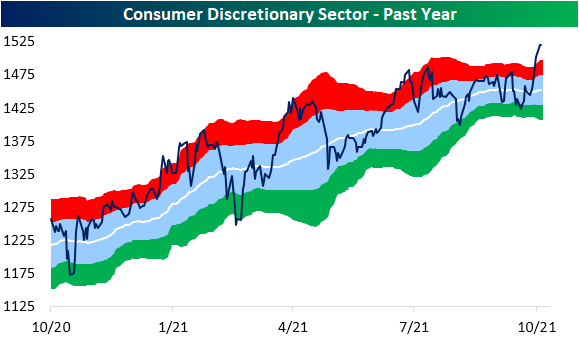 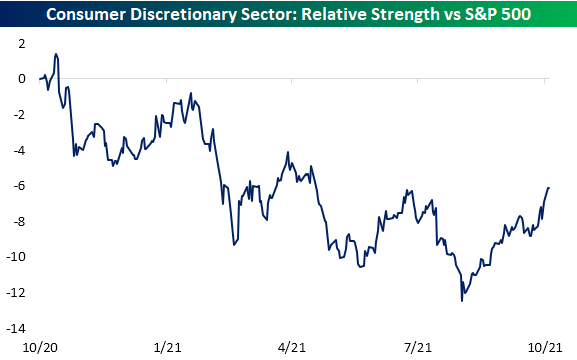 With that also comes a historic overbought reading.  In the chart below, we show the distance in standard deviations that the Consumer Discretionary sector has traded from its 50-DMA.  Finishing just shy of 3 standard deviations above its 50-DMA yesterday, the sector hit its most overbought level since the day after Christmas 2019.  Going back to the start of our data in 1990, there have only been 20 times including that 2019 occurrence that the Consumer Discretionary sector was as overbought as it was yesterday. 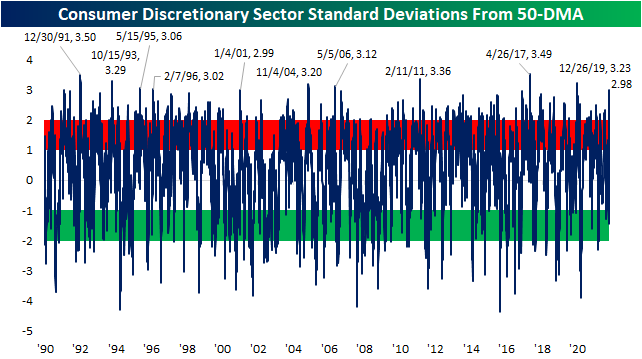 Looking closer at some of the stocks that have driven the sector shows some interesting themes.  As previously mentioned, online retail giant Amazon.com (AMZN) has been a key contributor to the S&P 500’s gains, and while the index has clearly broken out of its recent downtrend, AMZN is fighting to do the same. Meanwhile, Target (TGT) has posted double-digit gains in the past week bringing it quickly from oversold to overbought territory. Like AMZN, that move has smashed through a downtrend line.

Home improvement stores have also seen notable breakouts with Home Depot (HD) and Lowe’s (LOW) both breaking above their prior highs.  Tractor Supply (TSCO), on the other hand, has maintained its uptrend but has yet to break out.

As consumers have likely had to put off car purchases due to constrained supply and instead repair the car they have, auto parts retailers have also been solid performers with notable breakouts of their own. Stocks like Advance Auto Parts (AAP), O’Reilly (ORLY), LKQ (LKQ), and AutoZone (AZO) have all made new highs in recent days. There are a couple of holdouts, though.  Aptiv (APTV) continues to sit just short of a new high while Genuine Parts (GPC) has exited its downtrend but is much further below prior highs than its peers. Click here to view Bespoke’s premium membership options.