While the magnitude of the decline hasn’t been particularly large, Consumer Confidence dropped for the fourth straight month in November, in what is now tied for the longest monthly losing streak of the entire expansion.  The only other streak since the end of the last recession that was as long was from March through June 2012.  Not only did the headline index decline in November, but it also came in weaker than expected.  While economists were expecting the Conference Board’s headline index of Consumer Confidence to rise to 127.0, the actual reading came in at 125.5.

Even with both indices moving in the opposite direction, the spread between the two remains extremely elevated.  The only period besides the current one where the spread was wider came in the late 1990s and early 2000s leading up to and during the dot.com bust. 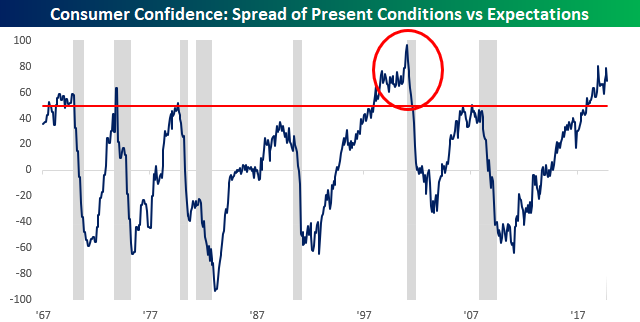 We also closely track the percentage of consumers who think jobs are plentiful.  November’s reading of 44.8 remains relatively high, but we have really started to see some volatility in this reading over the last few months which is unlike the pattern of the last several years.

Where we have really started to see volatility, though, is in confidence levels by age.  Over the last few months, confidence among consumers under the age of 35 has been all over the map.  After a two-month increase of 32.3% in August, confidence has declined 23% over the last two months.  The result of these swings is that just two months after confidence among consumers under the age of 35 hit the highest level since at least 1980, it has now cratered down to its lowest level since May 2016!  Those swings are dramatic enough, but the fact that they have occurred during a period when sentiment readings among other age cohorts haven’t seen moves even remotely as large is a bit confusing.

Finally, the chart below shows the historical spread in confidence between young (under 35) and older (over 55) consumers. Because of the extreme volatility in the confidence reading for younger consumers, the spread between the two age cohorts is now at a record low.  Traditionally, it has always been young Americans who have been the most optimistic as they have their entire lives and careers ahead of them.  In the last few years, though, younger consumers have become much more downbeat relative to their older peers.  For all the blame on boomers for everything wrong in this country, when it comes to confidence, they’re pulling their weight.Want to see Bespoke’s most actionable insights in real-time?  Start a two-week free trial to Bespoke Premium for immediate access.