The month of March is no doubt starting off on a positive note for economic data.  In addition to the ISM Manufacturing report, which moved to its highest level since January 2018, the latest update on Construction Spending for the month of January was also incredibly strong.  While economists were expecting the headline index to rise by 0.8%, the actual level of growth was more than double that at 1.7%.  The chart below shows the headline index going back to 2005, and the latest leg higher has been incredible, rising by 11.1% from its May low and leaving the pre-COVID peak in the dust.  It’s also worth pointing out that the decline in Construction Spending was actually smaller and shorter than the decline we saw during 2018!

Also notable about Monday’s report on Construction Spending is the fact that January marked the fourth straight month where the headline index grew more than 1% m/m.  Since 1993, there have only been three streaks that were longer and another three that were as long.  In case you needed a reminder, the economy is humming.  Click here to view Bespoke’s premium membership options for our best research available. 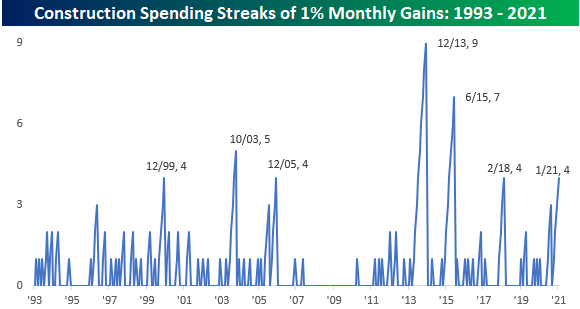