Internals not as Overbought as Price Suggests

Earlier this morning on Twitter, we highlighted that every major index ETF, small and large-cap alike, has pushed firmly into overbought territory in our Trend Analyzer with price sitting one standard deviation or more above their 50-DMAs.  While that could typically be taken as a sign of potential near term downside mean reversion to come, taking a look under the hood reveals that things may not be quite as overbought as they appear.

As shown in the trading range charts from our Daily Sector Snapshot included with the Morning Lineup and Closer, of the underlying sectors, some of the defensives, Real Estate (XLRE) and Utilities (XLU), are actually not overbought. Real Estate has not just become oversold but is nearly oversold to an extreme degree of two standard deviations below its 50-DMA.  While not quite there yet, Utilities is also on the verge of moving into oversold territory. Additionally, one of the more exposed sectors to trade, Industrials (XLI), has further upside as it too is only in neutral territory amidst the swarm of positive trade news. Of the rest of the sectors, conditions are still overbought by this measure with each one’s price over one standard deviation above their 50-DMAs. 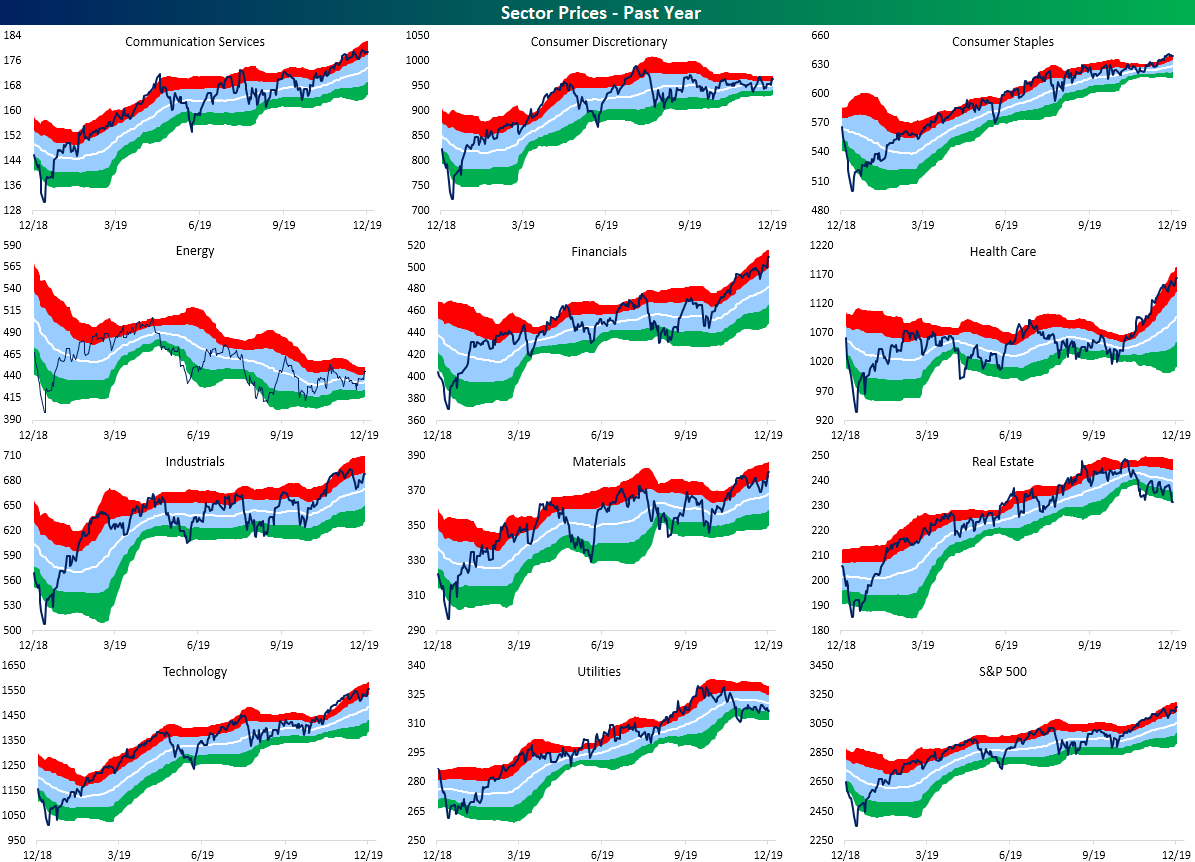 Though sectors prices have gotten elevated relative to their 50-DMAs, the same is not entirely true for the individual stocks of each sector. As shown in the charts below, only a handful of sectors like Health Care and Consumer Staples currently have an elevated number of stocks above their 50-DMAs. Other sectors like Communication Services, Consumer Discretionary, Industrials, Materials, and Technology have seen other periods this year where a higher percentage of the sector’s stocks had been above the 50-DMA.  As for the Utilities and Real Estate sectors, only 35.7% and 31.25%, respectively, of stocks are above their 50-DMAs.  That is notable in that for the two sectors, the readings are in the 12th and 6th percentiles of all days over the past year, respectively. This all means that while many stocks have participated in the rally, there are still plenty that could benefit from the technical catalyst of a break above the 50-DMA. 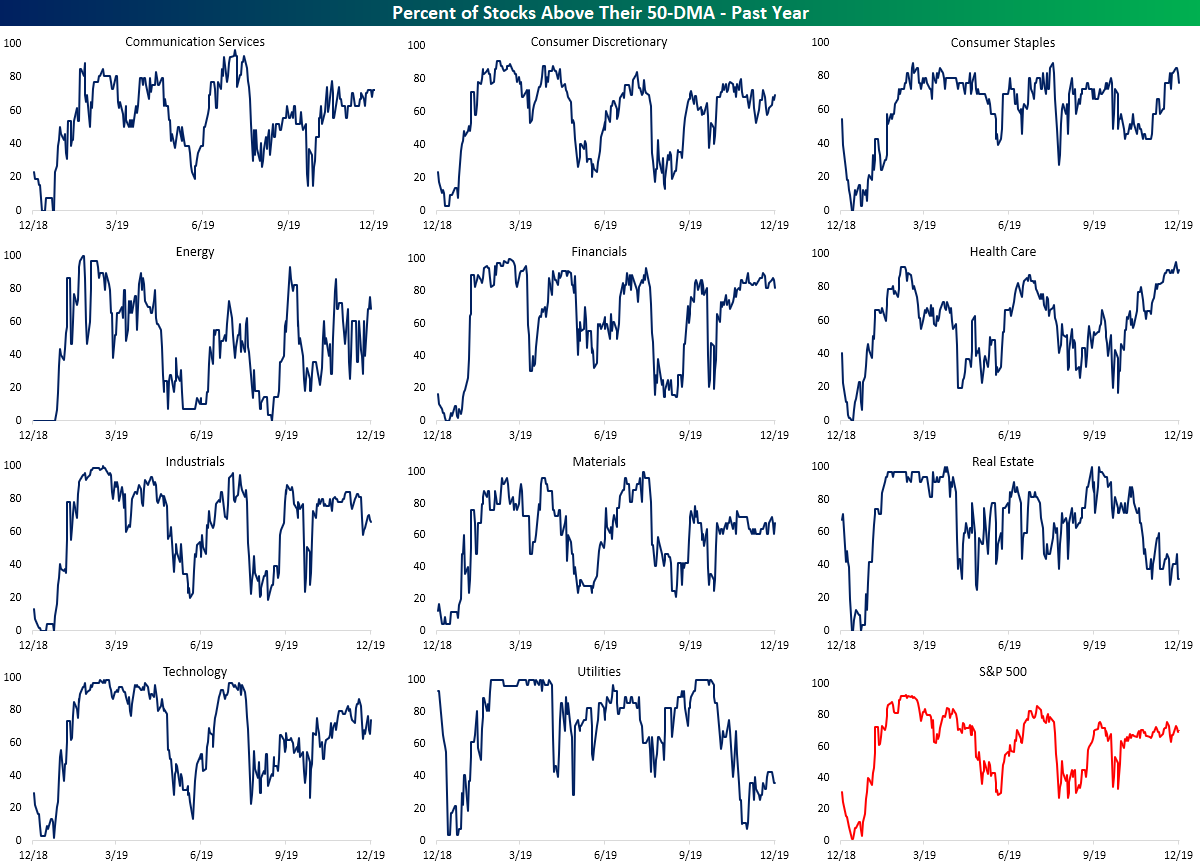 Another measure of overbought/oversold levels and participation, the 10-Day Advance/Decline line, is also not showing any drastic readings. The 10-Day A/D line shows the average number of daily advancers minus decliners over the last ten days.  When this reading gets elevated, it’s usually a sign of near-term exhaustion for price.  That’s simply not the case right now even with most sector’s trading in overbought territory.  Start a two-week free trial to Bespoke Institutional to access all of Bespoke’s equity market research and interactive investor tools. 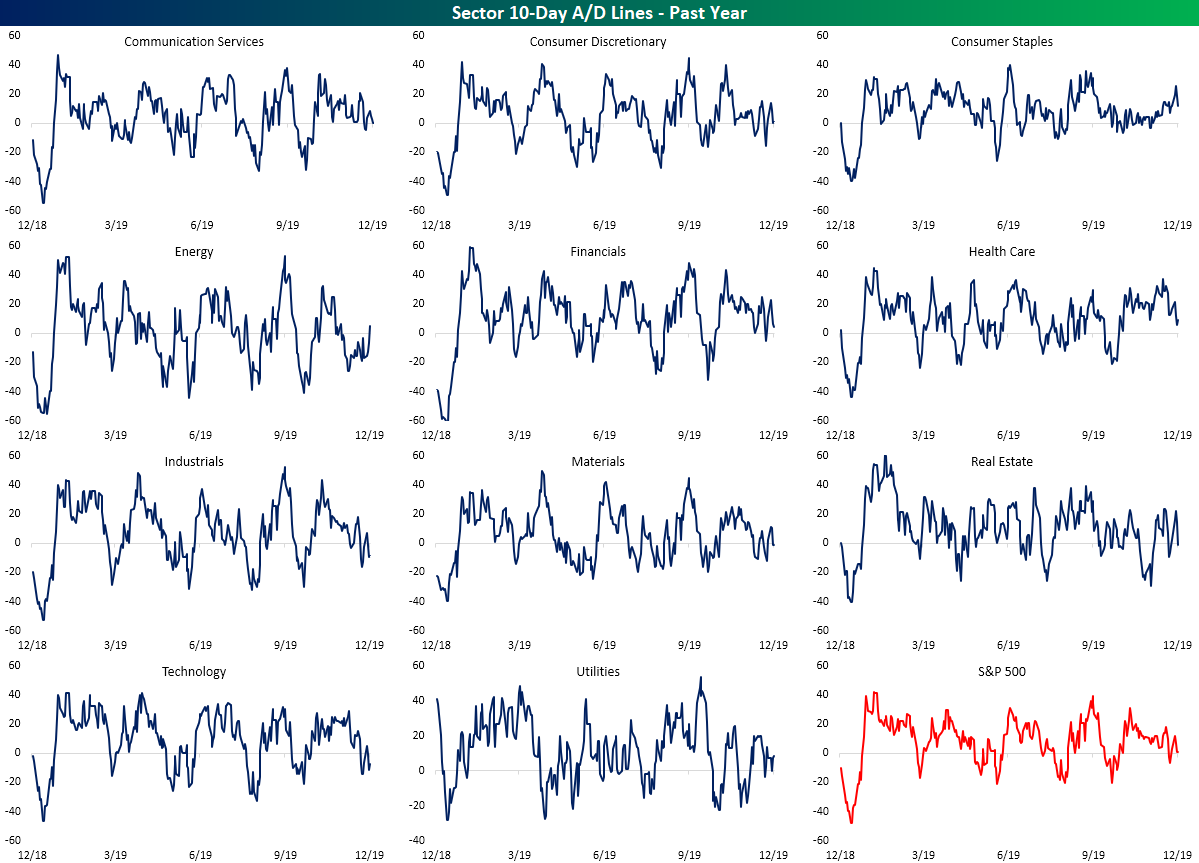