In Friday’s Bespoke Report, we broke down the rally off the bear market lows into three acts, noting a rotation out of “re-opening” stocks and back into the COVID economy stocks since early June. One metric where that is becoming evident is the sectors with the highest number of 52-week highs.  As of Friday’s close, Communication Services had the highest net percentage of stocks at 52 week highs at just under a quarter of the sector’s stocks, 23.08%.  While nearly 10 percentage points less, Consumer Staples has the second largest amount at new highs of the 11 sectors at 12.12%.  For both sectors, these were the highest readings since the 2/19 high. 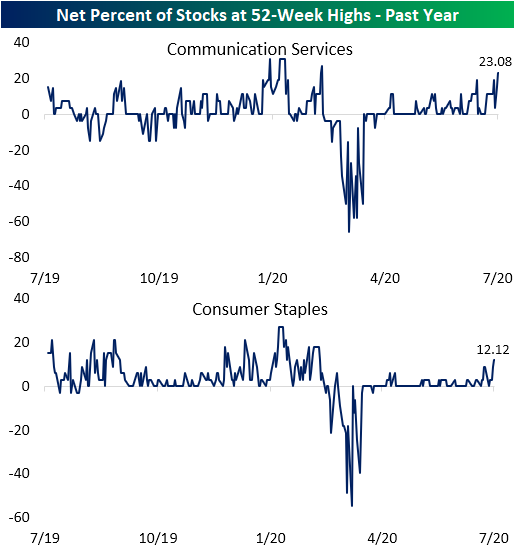 In the snapshot of our Chart Scanner below, we show the stocks in these sectors that reached new 52-week highs last Friday as well as a few others in sectors with interesting setups approaching or just off of 52 week highs.  Of the Communication Services stocks, all of the major video game publishers—Activision-Blizzard (ATVI), Electronic Arts (EA), and Take-Two Interactive (TTWO)—made the list in addition to streaming giant Netflix (NFLX) and Google parent Alphabet (GOOGL). Each of the video game publishers has been in strong uptrends lately. Meanwhile, Netflix (NFLX) had an astounding end to the week, rallying 8.06% on Friday for its best single-day since March 23rd; the same day as the bear market low. Although all of these stocks have had strong uptrends, at the moment they are all extremely overbought meaning that now may not be the best entry point.  Elsewhere in the sector, Charter Communications (CHTR) has been trending higher after a bounce off of its 50-DMA. If it continues to move higher it will be its second test (first one occurring in early June) of its February highs. Facebook (FB) is also right near a 52 week high after a sharp rally off of its 50-DMA in the past two weeks.

In the Consumer Staples sector, Conagra Brands (CAG), McCormick (MCK), Clorox (CLX), and Church & Dwight (CHD) also all reached new highs on Friday.  For some like CAG and CHD, recent breakouts were above resistance from further back in 2019 while other highs for others like MKC were more recent.  Other Consumer Staples stocks near 52-week highs include wholesale retailer Costco (COST) which broke out to a new high on Thursday but saw an inside day on Friday.  General Mills (GIS) has broken its short term downtrend that has been in place since May over the past few weeks and has nearly returned to those prior highs. Click here to view Bespoke’s premium membership options for our best research available.