Both oil and gold futures hit 52-week highs in the last week, largely due to Russia’s invasion of Ukraine. Gold is viewed as the classic store of value, which explains the commodity’s recent uptick. Investors are increasingly pursuing hard assets, which spikes the demand for gold while supply remains relatively consistent. Oil futures have sky-rocketed due to a few factors. First, demand for the commodity has increased as the economy has fully reopened and travel has begun to recover. At the same time, we are in a supply-restricted environment as sanctions on Russia have hurt supplies given its status as the world’s second-largest producer. 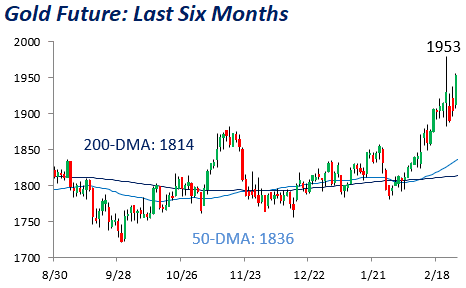 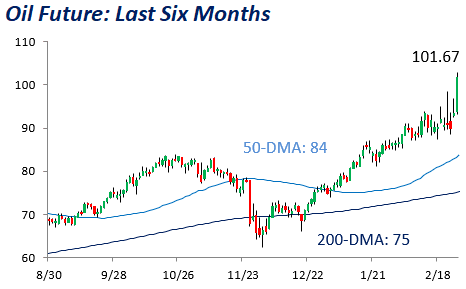 Although the price of these commodities has risen substantially, equities with direct exposure to these prices have reacted differently relative to the underlying commodity. Starting with oil, the energy sector benefits from increased oil prices as margins expand, thus propping up EPS and allowing for more cash to be returned to shareholders. However, while oil has risen by 15.3% in the last month as of yesterday’s close, the energy sector has only gained 2.7%. This has resulted in a lower ratio between energy stocks and the price of oil, which is pictured below. Since 1990, the performance of the S&P 500 Energy sector and WTI crude oil has been highly correlated, with a correlation coefficient of 0.88 between their closing prices. However, over the last month, the coefficient is just 0.52 and is slightly below the average trailing month correlation coefficient since 1990, which is 0.59. Currently, the ratio of the price of the Energy sector to oil is 5.3, which is well below the median ratio of 6.4 (since 1990). The last time oil topped $100 per barrel was between 2011 and 2014, and we saw the ratio of energy stocks to oil remain at roughly our current level throughout this time period. Once oil definitely broke through the $100 level, the ratio increased. 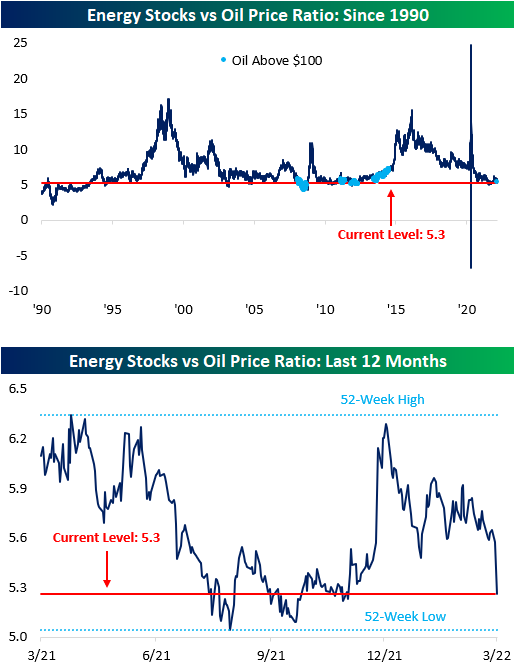 When looking at the ratio of the price of gold vs gold mining stocks, we are seeing the opposite pattern play out. While the price of an ounce of gold has increased 8.4% since the start of February (as of yesterday’s close), the price of the VanEck Gold Miners ETF (GNX) has appreciated by 17.5%. Since we emerged from the global financial crisis in 2008, this ratio has remained elevated, as the performance of the gold miners has not been as strong as the performance of the underlying commodity. It is worth noting that GNX was launched in mid-2006, so for the chart below we used a contiguous index, using pricing data from Newmont Corp. (NEM) for the period from 1990 through mid-2006. Since 1990, the performance correlation of the two assets has been relatively minimal, holding a correlation coefficient of 0.42. However, over the last month, this reading has ticked higher to 0.97. The rolling one-month correlation coefficient between gold and the miner stocks has had an average 0.72 (median: 0.81), meaning that the miner stocks are more correlated to the movements of gold than they typically have been since 1990. The current price ratio of 15.2 is much higher than the median since 1990 (5.2) but is essentially in line with the ratio since the start of 2014 (15.6). 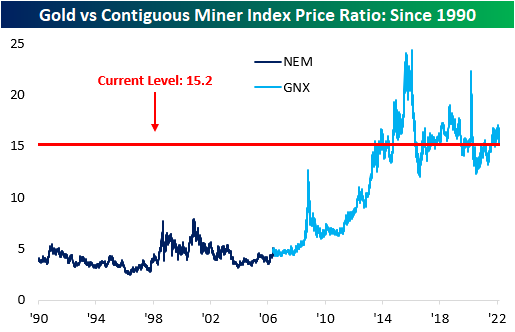 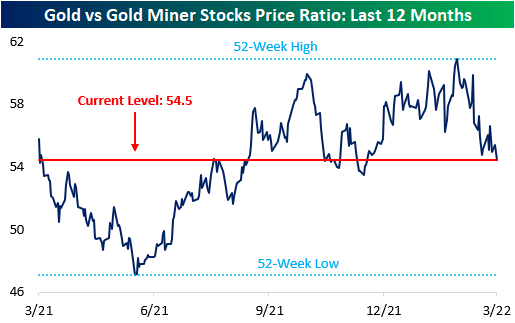 To summarize, while a number of factors will impact the price of energy and gold related stocks besides just the price of the underlying commodities they deal in, energy stocks have been less correlated in recent history than they have in the past, but we see the opposite in gold miners relative to the price of gold. Additionally, energy stocks have underperformed oil over the last month, and the inverse is true for gold mining stocks relative to gold. Click here to view Bespoke’s premium membership options.