While our friends in the bond market are all enjoying the third day of a three-day weekend, US equities are operating on a typical schedule for Columbus Day.  Given the bank holiday and the fact that most schools are closed in the NYC region, this is often a day where liquidity is a bit more scarce than normal.  A perfect example of that lack of liquidity causing major outsized moves was in 2008 when the S&P 500 rallied more than 11% on Columbus Day.  Granted, that was a period of historic volatility, but there have only been a handful of such large one-day moves in market history, so even for the financial crisis, an 11.6% one-day move was a big deal. As good (or bad if you were short) as that move felt in 2008, the gains were fleeting and were more than erased within just seven trading days!

For the entire Columbus Day week, the S&P 500’s average return has been a gain of 0.65% (median: 0.35%) with gains 64% of the time.  Those figures are also better than the long-term average weekly change of 0.17% for all periods since 1994.  More recently, though, it has been a bit of a coin flip in terms of market returns as the S&P 500 has alternated between positive and negative returns for the week since 2011.  Last year, the S&P 500 was down 4.1% during the week, so if the back and forth pattern continues, bulls will catch a break this year.  Start a two-week free trial to Bespoke Institutional to access all of our interactive tools, including our popular Seasonality tool. 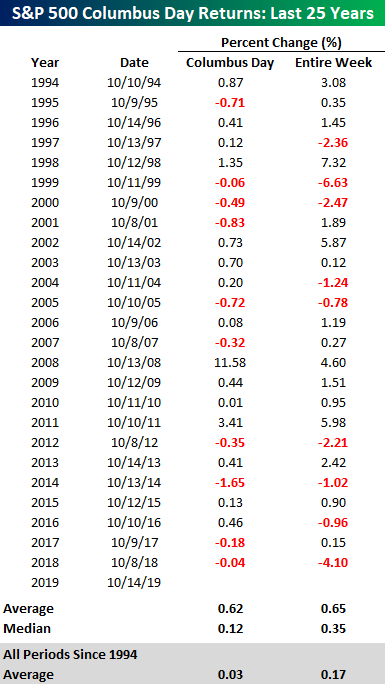