Claims Tick Up Again, But It’s Not All Bad 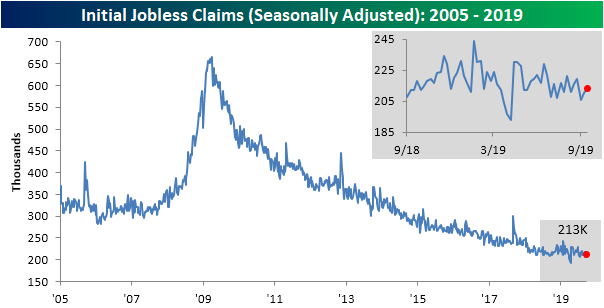 The four-week moving average which helps to smooth out some of the fluctuations of this high-frequency data fell once again this week. Now at 212K, the moving average has fallen for three consecutive weeks and is at its joint lowest (the week of July 26th also had a reading of 212K) level since April. Looking ahead to next week, assuming no large revisions or a significant uptick in next week’s data, the moving average could potentially drop again as the high of 219K from the final week of August rolls off the average. 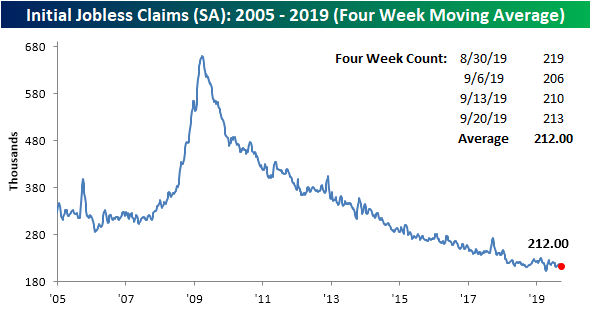 Non-seasonally adjusted (NSA) claims also rose this week by 1.2K to 174.3K.  This uptick was likely due to seasonal patterns given the current week of the year has averaged a 7.2K week-over-week increase this cycle. Not only was there a week-over-week increase which could have been expected, but there was also a year-over-year increase as has been the case for many weeks in 2019.  NSA claims are now 1.4K higher than they were this time last year. While that is not necessarily a positive sign as it points to some moderation in the trend of improvement, we would like to note that 2017 also saw a YoY increase in the comparable week (38th week of the year) that was a much larger 14.5K. The following year, claims would go on to decline another 40.1K.  So this week’s increase by no means indicates a reversal in the trend, especially considering the new cycle lows established only a few weeks ago. Additionally, while initial claims rose slightly, continuing claims fell, dropping to 1650K from 1661K. That is the lowest reading on continuing claims since October of last year.  Start a two-week free trial to Bespoke Institutional to access our interactive economic indicators monitor and much more. 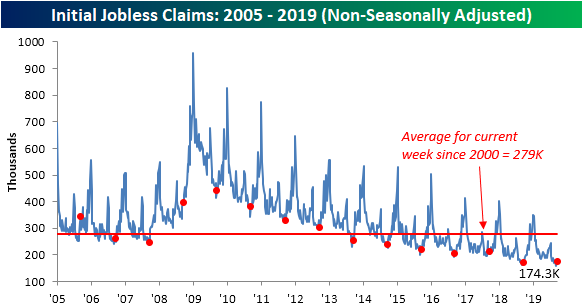