Seasonally adjusted jobless claims continue to hover right around 1 million as forecasts were predicting. This week’s reading of 1.006 million was down 98K from 1.104 million last week and remains around some of the lowest levels of the pandemic. But as we have frequently mentioned, that is still very elevated relative to the rest of history. 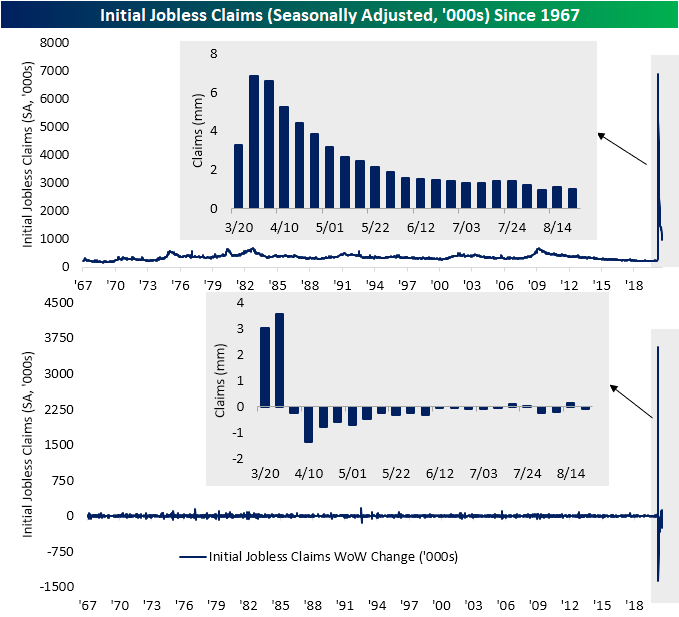 On a non-seasonally adjusted basis, claims have likewise continued to fall as is the seasonal norm for this time of year. NSA jobless claims came in at a pandemic low of 821.59K this week, down from 889.55K last week.  Again, although NSA claims have been lower, there are seasonal headwinds. Headed into the fall, claims tend to experience a seasonal bottom by mid-September, so NSA claims could begin to tick higher in the coming weeks. 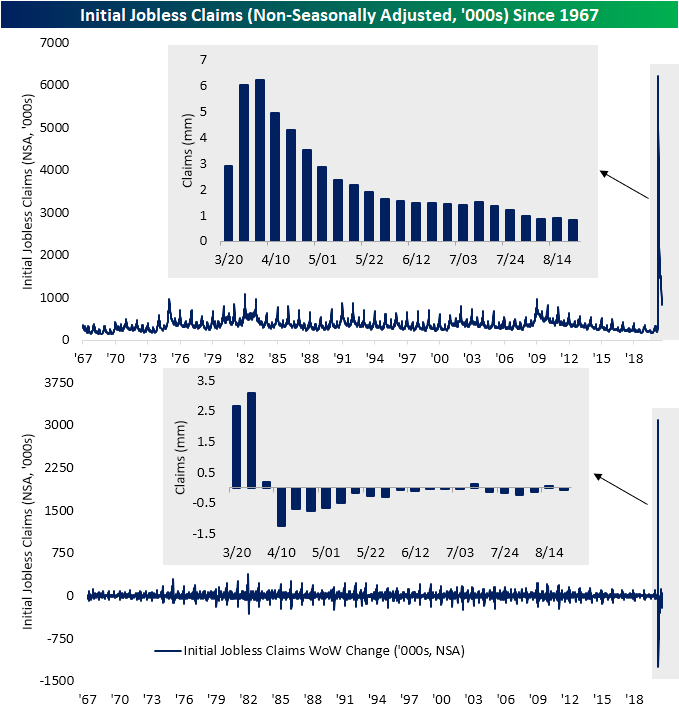 As for seasonally adjusted continuing claims, there was also a small improvement falling from 14.76 million to 14.54 million.  That is a fourth consecutive week in which continuing claims have declined. 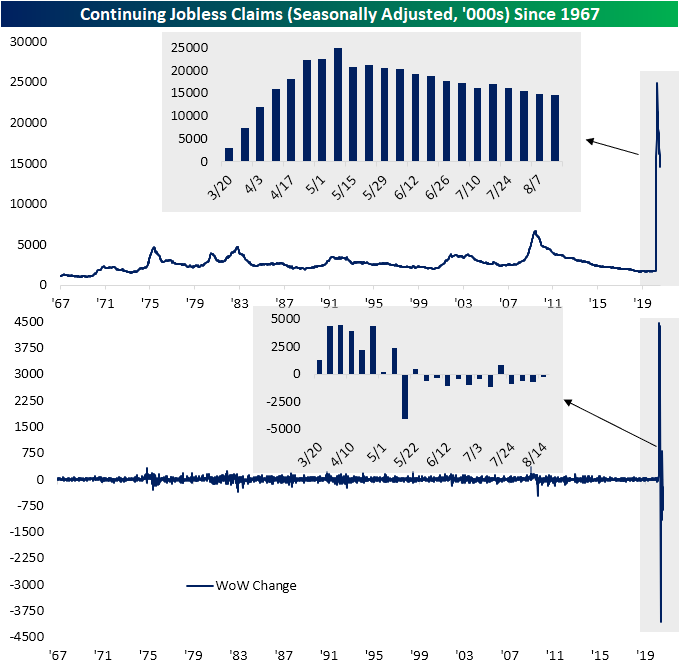 Factoring in Pandemic Unemployment Assistance (PUA), total NSA claims actually rose.  Initial PUA claims rose from 0.53 million to 0.61 million for the second straight weekly increase. As for continuing claims (non-seasonally adjusted and lagged an additional week), total claims continued to fall in the first week of August reaching 25.2 million.  That’s around the same levels as late April, but unlike back then, a much larger share of those claims are comprised of PUA claims. 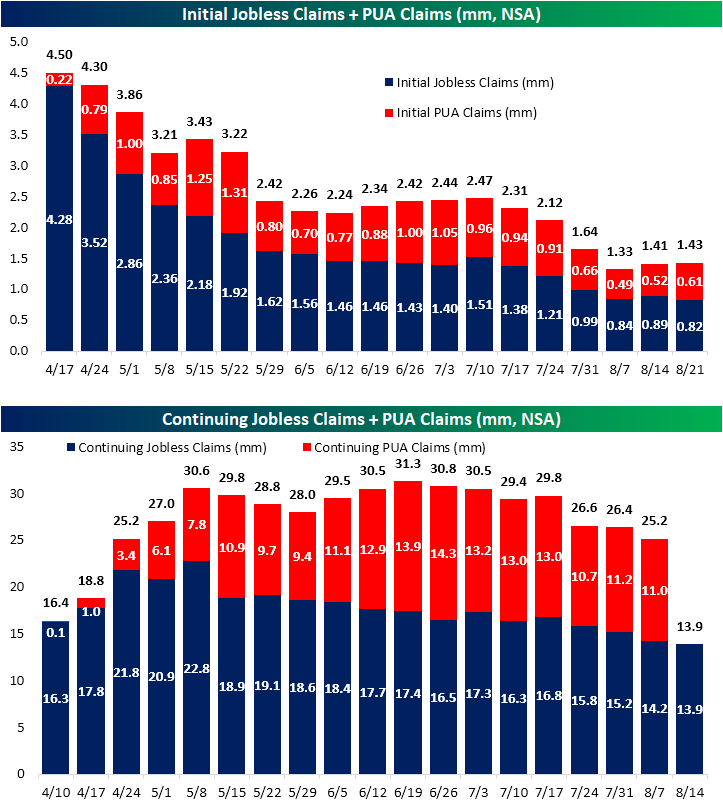 Finally, in the table below we show a breakdown of initial and continuing claims (both NSA) by state.  As depicted, California, Illinois, Iowa, Kansas, and Montana all saw the largest percentage increases in initial claims this week, but not all of those are that elevated relative to where they have been in recent months.  Kansas and  Alaska are reporting claims that are the least improved from their pandemic peak.  Additionally, the bulk of states have reported an improvement this week.  Of the 53 states and territories, 41 reported lower claims this week. While not quite as strong, the same can be said for continuing claims. 39 states reported a decline in continuing claims while 14 reported an increase.  Based on continuing claims, California, DC, Hawaii, Nevada, and  New York currently have the highest unemployment rates each in the teens (continuing claims as a percent of the state’s labor force). Click here to view Bespoke’s premium membership options for our best research available. 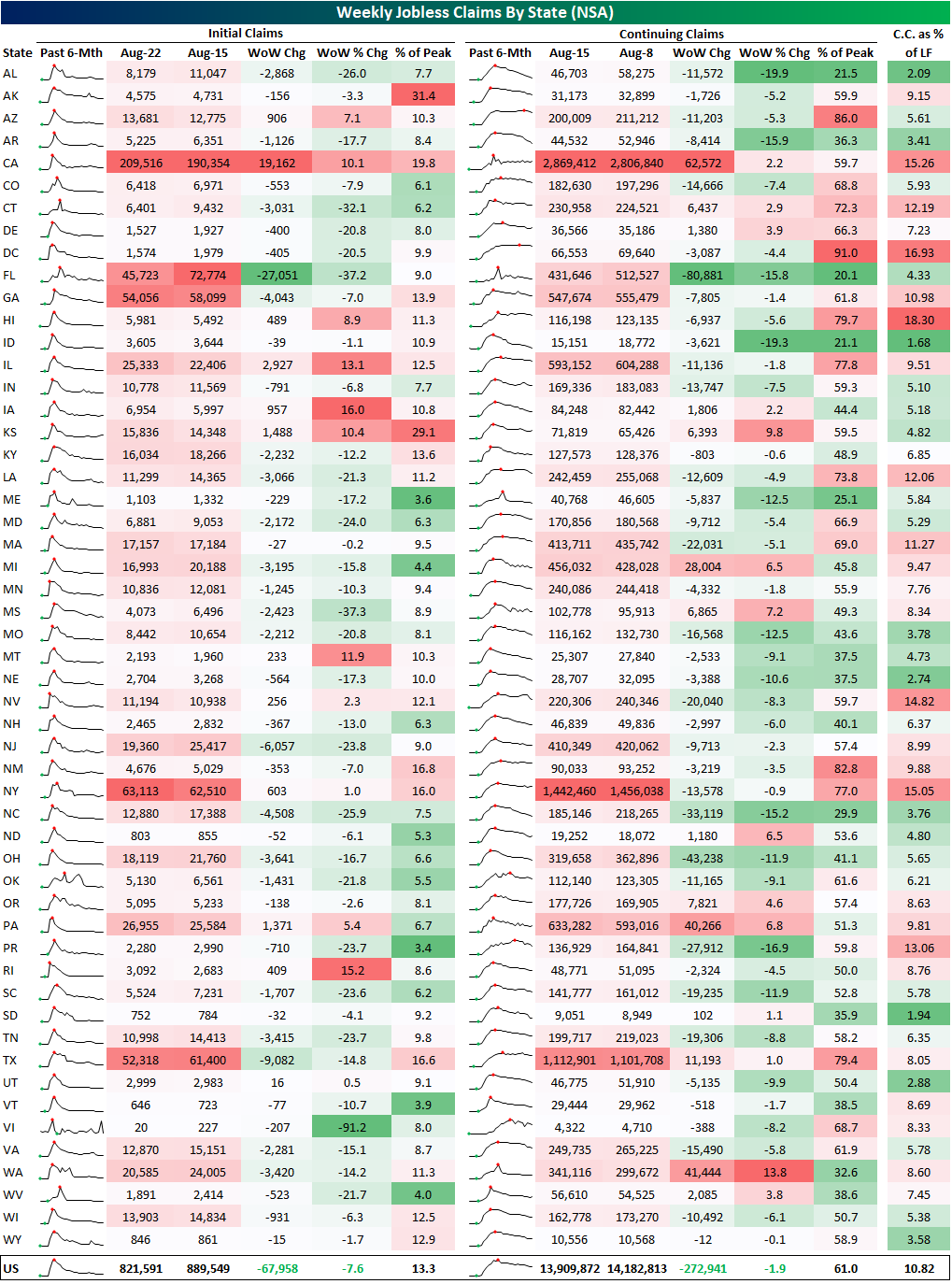