Claims Stay In Their Lane

Headed into this week, initial jobless claims had been on the rise for three weeks in a row.  This streak has come to an end as claims fell to 210K.  Expectations were calling for this week to be unchanged from last week’s revised 220K.  This decline has brought claims back to the lower end of the past year’s range and the lowest since September 12th.  The record streaks at or below 300K and 250K also continue this week, growing to 240 and 105 consecutive weeks, respectively. 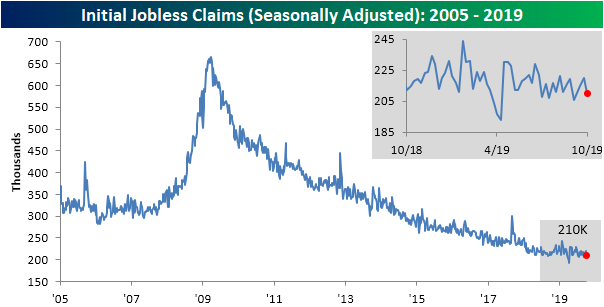 Although the weekly data saw a fairly large decrease with its 10K drop, the four-week moving average actually rose for its second week in a row.  The moving average, which helps to smooth out the week to week fluctuations, now sits at 213.75K.  While it did rise, the degree of the increase was once again small. The moving average is up just 1K from last week, and that is actually one of the larger moves in recent weeks as the prior three weeks only saw movements of 0.25K.

Given this, the moving average has remained in its tight range recently. Over the past three months, there has been only one week (August 30th when the average was 216.75K) when the average was not in the range of 212K and 215K. That sort of tight range over the past quarter is something that has not been observed in the past couple of years. In fact, the spread of just 4.75K between the past 3 months’ high and low is the joint smallest range since late August 2017. Furthermore, that is the second tightest range of the current cycle with the only smaller 3-month range being the week prior to the aforementioned week in August 2017 when the range was just 4K. In other words, claims are still at healthy levels but have also not picked a direction of improvement or worsening. 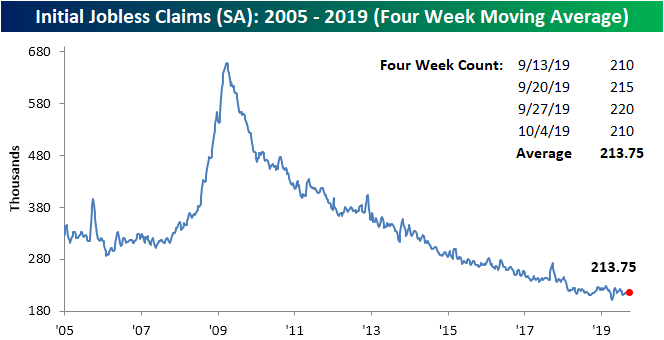 Claims in non-seasonally adjusted terms also rose by just 1K this week to 173K.  While that is a small week-over-week change, relative to last year claims dropped by over 20K.  This week’s NSA data was also well below the average for the current week of the year since 2000 of 300.56K.  Start a two-week free trial to Bespoke Institutional to access our interactive economic indicators monitor and much more. 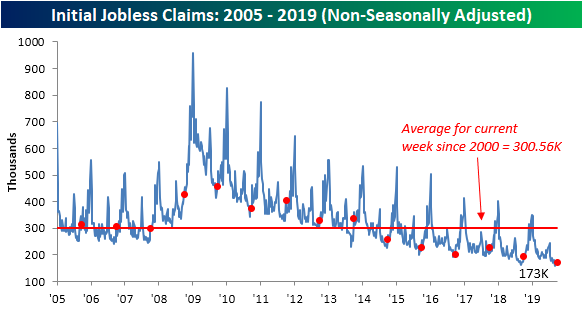