As could be expected and as we have been warning this week (see here and here), shutdowns aimed to thwart the spread of the coronavirus have begun to impact weekly jobless claims.  Claims exploded higher by 70K to 281K this week. That is the largest weekly increase in the seasonally adjusted number since November of 2012 when they had risen 81K.  Going all the way back to the beginning of the data in 1967, there have only been 13 total times (including the two aforementioned instances) that jobless claims have risen by 70K or more in a single week.  The largest of these was a 172K spike in July of 1992.  While this week’s increase may have been large, just wait for next week’s explosion. 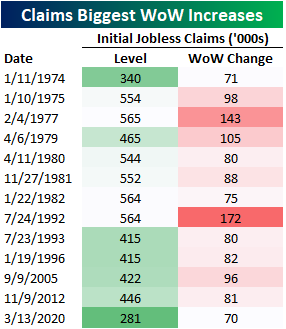 With the massive surge in claims this week, the indicator now sits at its highest level since the spike up to 299K in September 2017.  Other than that, the last time claims consistently came in around these levels was back in mid-2015. Given the fact that shutdowns across the country have ramped up over the past week, claims are likely to continue to experience large moves, and it is likely that we will see this number rise even further in the coming weeks.

The moving average has also risen but is not yet at as notable of levels as the seasonally adjusted number. Now at 231.5K, the moving average is only at its highest level since the final week of 2019 when it was 233.5K.  But the 16.5K increase versus last week is the largest spike in one week since October of 2013 when the moving average rose by 17K. Additionally, of all weeks since 2000, it is the 14th largest week over week increase. 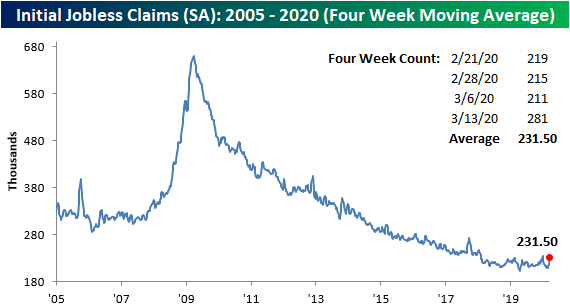 The non-seasonally adjusted number rose by 50.5K this week to 250.9K.  For the current week of the year (12th week), that is the highest level since 2015 when it was 260.2K.Start a two-week free trial to Bespoke Institutional to access our interactive economic indicators monitor and much more. 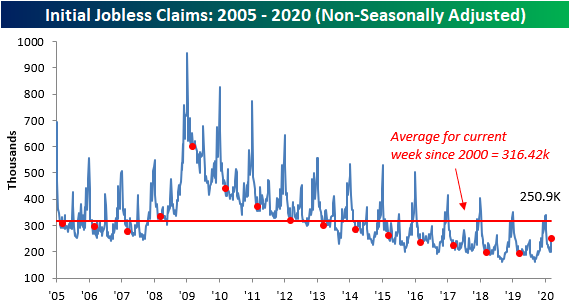