Initial jobless claims last week came in surprisingly high at 225K.  That number has since been revised even higher to 227K.  Despite expectations of a decline to 218K, this week’s print was unchanged from the previous week’s revised number.  The past two weeks’ reports represent the highest level for jobless claims since June 21st’s reading of 229K.  Given the lack of improvement this week, the indicator remains above the past few months range, although the record streaks at or below 250K and 300K are still going strong at 111 and 246 weeks, respectively.

Given the increase in the seasonally adjusted number over the past two weeks, the moving average has also begun to tick higher, especially given the narrow range it has remained in recently. Rising to 221K, the four-week moving average is also now at its highest level since June’s when it reached 222.5K. This was also a slight increase, 0.25K, from the same week last year. 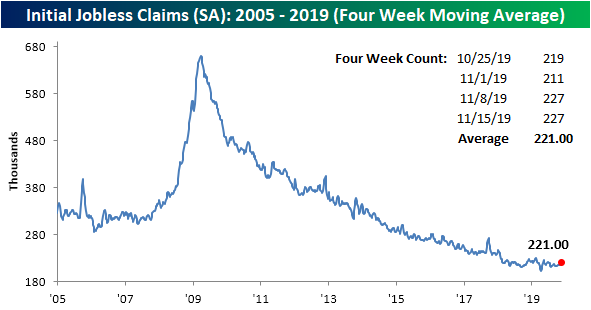 Turning to the non-seasonally adjusted data, jobless claims actually fell to 226.4K from 239K last week.  That is a bit of a break from the seasonal trend higher towards the year’s highs around this time of year.  This week’s reading was down year over year as NSA claims sit well below the average of 335.1K for the current week of the year since 2000. 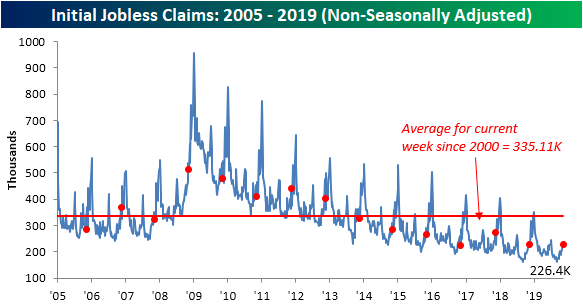 Continuing claims were also a disappointment in labor data today as they rose to 1695K compared to estimates predicting no change at 1683K. As with initial claims, last week’s number was also revised higher to 1693K. Yet another parallel with initial jobless claims, continuing claims have been fairly flat over the past year.  As shown in the second chart below, the year-over-year change in continuing claims can no longer boast the same strength that it has since the start of the cycle. In the final week of September, continuing claims experienced their first year-over-year increase since 2010 when claims were still recovering from the last recession. Since then, claims have seen seven consecutive weeks rising versus last year. Start a two-week free trial to Bespoke Institutional to access our interactive economic indicators monitor and much more. 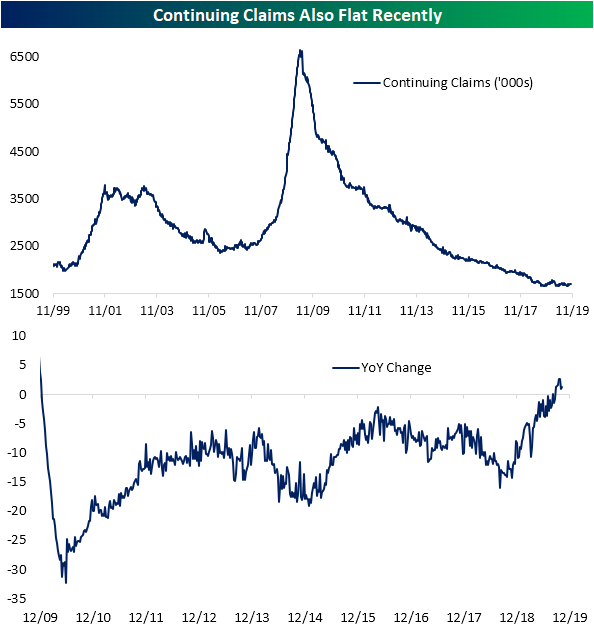