Initial jobless claims improved this week, falling to 211K from an upwardly revised 219K last week.  This 8K decline was larger than expected as forecasts were calling for claims to fall to 215K.  Jobless claims remain in the range of the past few months and are also the lowest since the 210K print in the first week of October. With this week’s print, claims have now held at or below 300K and 250K for record streaks of 244 and 109 consecutive weeks, respectively.

The four-week moving average, which helps to smooth out the line by removing some of the week to week fluctuations, rose this week to 215.25K. 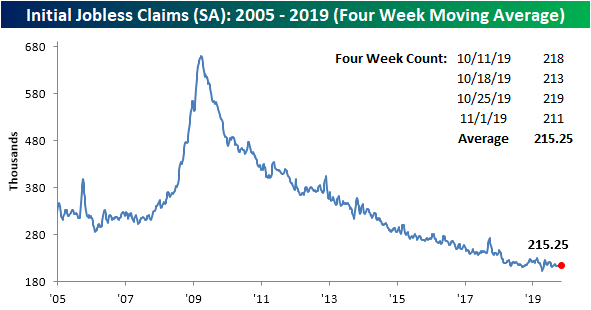 While still strong, claims have not done much recently as they have simply meandered sideways. In the past month alone, the four-week moving average has been in a range between 215K and 216K.  As shown in the chart below, the 4-week moving average has been extremely rangebound over the past 3 months.  With just 4.25K between the past 12 week’s highest and lowest readings, the moving average has been in the tightest range since August of 2017 when that range was 4K.  Going back before that, times that the 12-week range falls below 5K have been few and far between.  The only other time in the history of the data with a range of 5K or tighter was in July of 1973. At that time, claims stood around 230K and 240K. Those past occurrences did not see these tight ranges stay in place for extended periods of time as the range typically began to widen afterward. In regards to recessions (gray shaded regions on the chart), while they often follow a sharp widening that was preceded by a tight range, tight ranges by themselves are not necessarily an early warning sign.  While the 1973 period was followed by a recession, just two years ago we saw a similarly narrow range with no recession.  There have also been many other periods where the spread narrowed to similarly tight levels right in the middle of economic expansions. 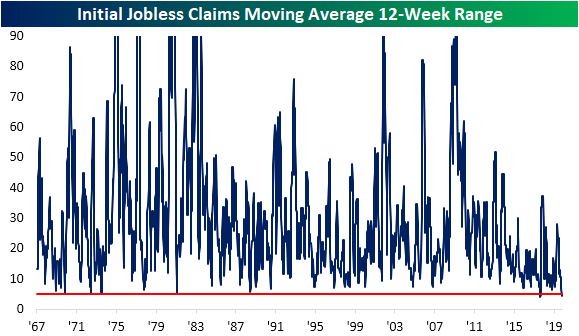 As is the norm for this time of year, non-seasonally adjusted claims have continued to rise this week. Now up to 205.5K from 198.7K last week, NSA claims are at their highest level since July. While seasonally adjusted claims have been rangebound, the NSA data did fall year-over-year. One year ago, NSA claims stood at 214.8K.  Start a two-week free trial to Bespoke Institutional to access our interactive economic indicators monitor and much more. 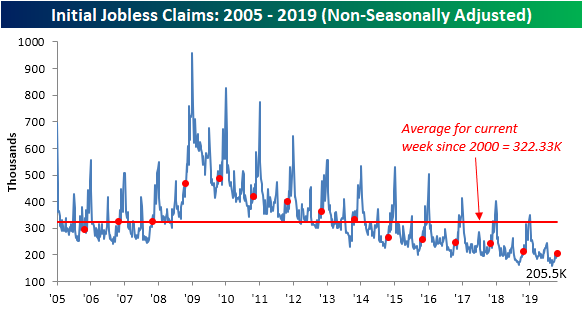