Claims on the Rise

Initial jobless claims rose this week, albeit at a slightly larger than expected rate (219K vs 212K estimate). Claims have now risen in back-to-back-to-back weeks for the first time since September after bottoming out at 203K which was the lowest print since last spring’s multi-decade lows.  While claims are up, the fact that the magnitude of the increases has been small and that claims were coming off of already low levels, this week’s print only leaves us at similar levels to the second half of January.

As claims have moved slightly higher over the past few weeks, so too has the four-week moving average, rising 0.5K to 209.75K. 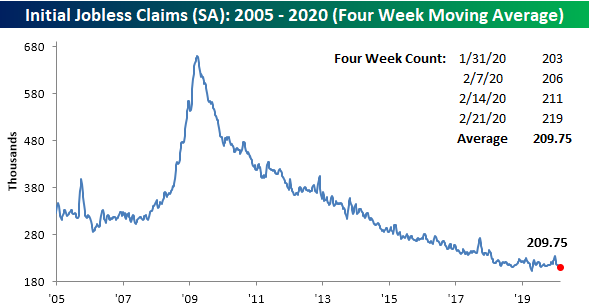 As we have mentioned in the past, although we have gotten close in recent weeks, initial jobless claims have yet to put in a new cycle low for some time now.  As shown in the charts below, for both the seasonally adjusted number and moving average there has not been a new cycle low for 45 consecutive weeks. Those are the longest such streaks of the current expansion.  As we have discussed in the past, this is more of a representation of the lack of improvements for claims rather than degradation in labor data, especially as the level of claims remains at fairly healthy levels. 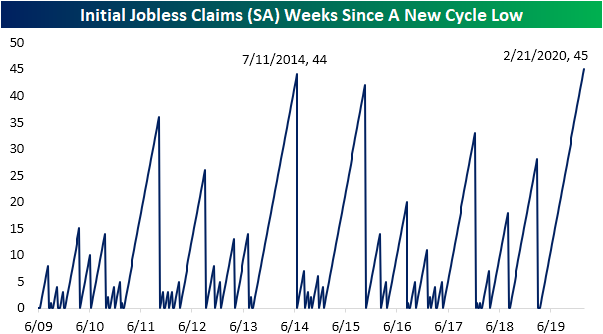 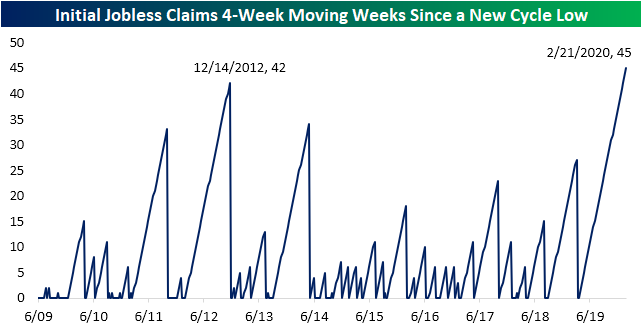 Turning to the non-seasonally adjusted number, claims have fallen again as is the norm for this time of year.  Now at 199.1K, claims are well below their average for the current week of the year since 2000.  While lower than last year, the comparable week in 2018 saw an even lower reading of 196.3K. Start a two-week free trial to Bespoke Institutional to access our interactive economic indicators monitor and much more. 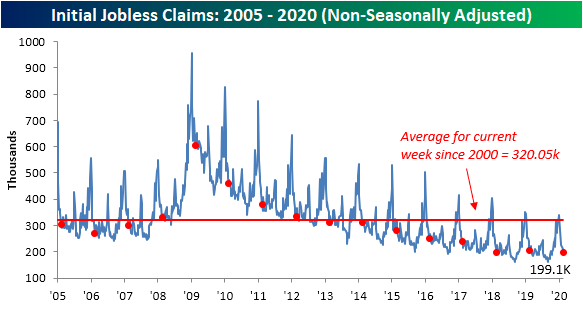