Claims Keep Up Their Momentum

Jobless claims have kept up their momentum as they fell for a second straight week.  With the caveat of differences in seasonal adjustment methodologies beginning in September making comparisons not exactly like for like, this week’s print of 751K is a new low for the pandemic. That is down 40K from last week’s upwardly revised reading of 791K.  It was also significantly better than expectations which were calling for claims to only fall to 778K. 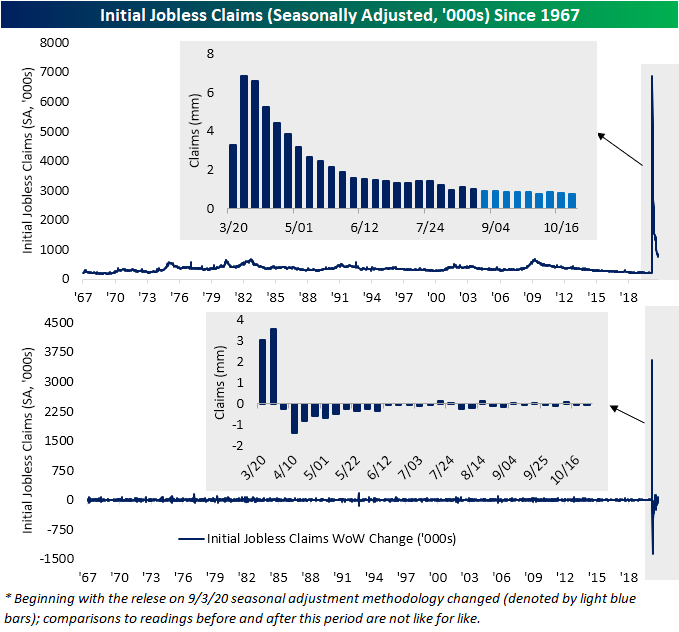 Lagged one additional week to initial claims, continuing claims also reached its lowest levels since March this week.  Seasonally adjusted claims fell to 7.756 million.  That is 709K lower than last week.  Since the first week of September, continuing jobless claims have fallen every week but one (9/12) when claims were unchanged.  Although claims did improve this week, forecasts had penciled in for a slightly larger improvement, calling for claims to fall to 7.7 million. 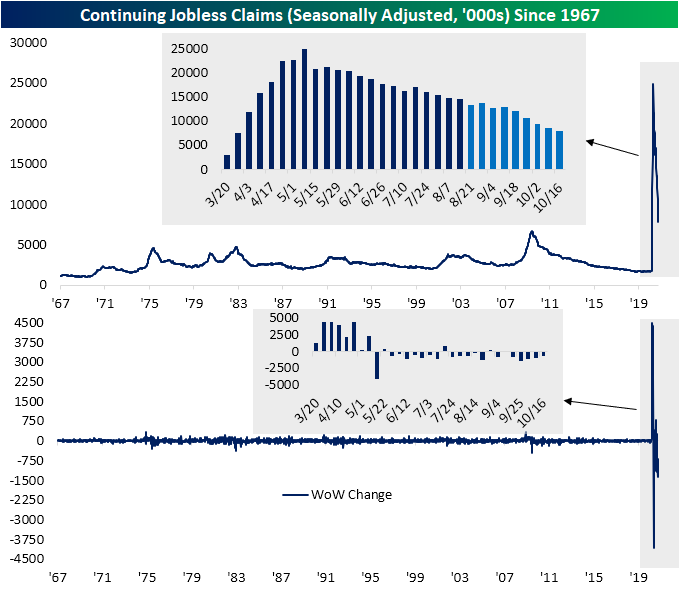 On a non-seasonally adjusted basis, claims were actually not at a new low for the pandemic, but they did come very close.  Unadjusted claims did fall from 760.6K last week down to 732.2K, but that is 1K above the prior post-COVID low from the first week of October. 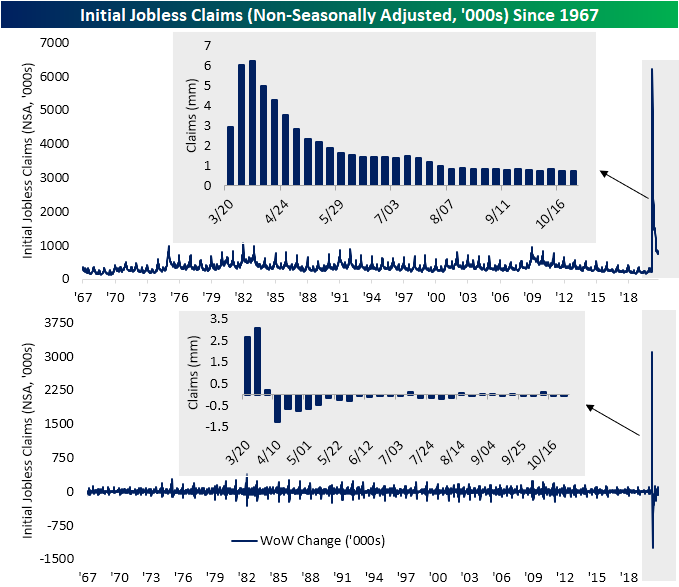 Even though unadjusted initial claims are not necessarily at a new low, recent improvements have appeared to be going against seasonal tendencies.  As shown in the charts below, both initial and continuing claims have historically risen from now through the end of the year. Instead, this year has seen claims continue to grind lower. In fact, unadjusted continuing claims did reach a new low in the most recent reading. 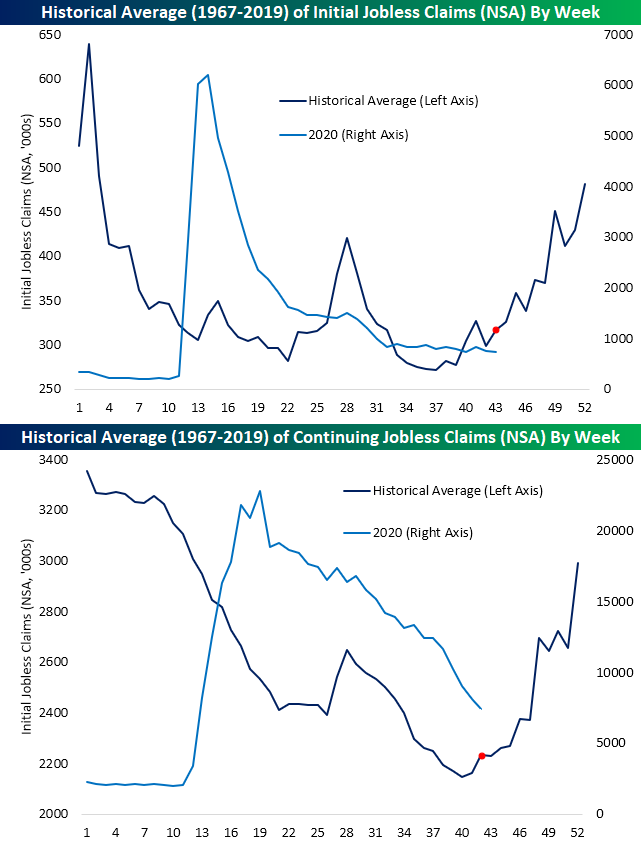 While the inclusion of all programs in addition to regular state claims creates yet another week’s lag, by this measure claims also fell to a new post-COVID low. For the week of October 9th, total continuing claims were 22.7 million, a decline of 0.4 million from the previous week.  Total claims have now declined for four consecutive weeks, the longest streak of back to back declines of the pandemic. Regular state claims drove this decline while Pandemic Unemployment Assistance (PUA) and Pandemic Emergency Unemployment Compensation (PEUC) have actually risen. For PUA claims, the most recent week’s increase actually still leaves the count for the program at the low end of its range. Meanwhile, PEUC claims, which extend regular unemployment benefits up to 13 weeks after expiration are at new highs for the pandemic. Given this, they now take up their largest share of total continuing claims yet (16.2%). Extended benefits, on the other hand, were lower in the most recent week but remain at the high end of their range. In other words, net overall claims have continued to improve, but the declines in some measures (namely regular state and PUA claims) have not necessarily meant all those people are exiting the unemployment insurance system, but rather a growing number of people are filing for available extensions.  Click here to view Bespoke’s premium membership options for our best research available. 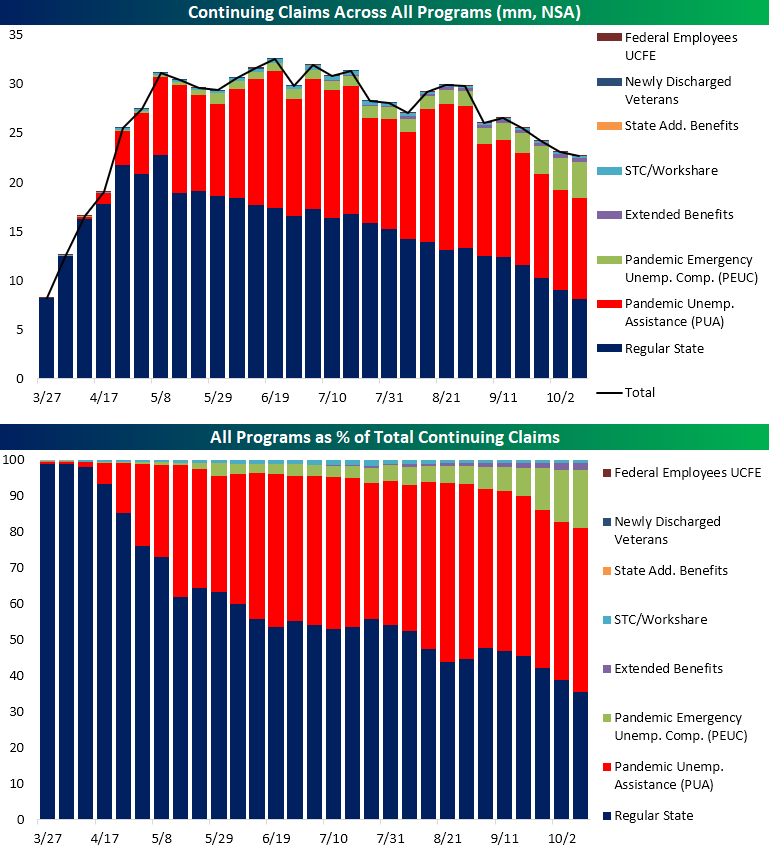