Last week’s number for seasonally adjusted initial jobless claims was revised higher by 37K. That means that while the original print of 553K was the lowest level of not only April but also of the entire pandemic, the revised reading actually changed that to make for the highest level of claims in three weeks. In spite of this, in the most recent week’s data, jobless claims dropped by 92K to 498K. That is the first reading below 500K of the pandemic era and is now down over 90% from the high in claims just over a year ago. This week’s reading is also for the first time less than double the reading from just before the massive upswing in claims in March of last year. 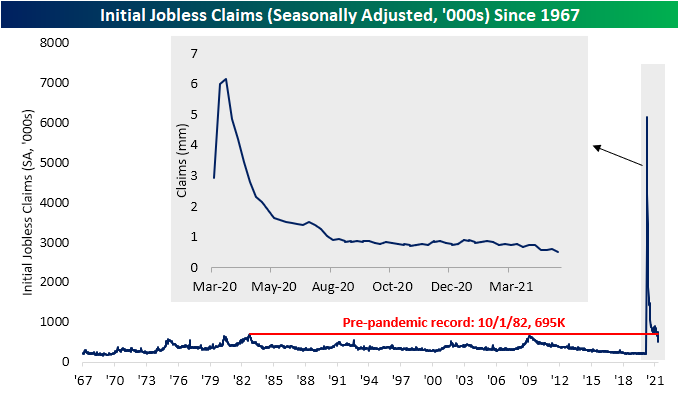 While there is the added factor of seasonal tailwinds—every week from the second week of April through the end of May has historically averaged a week over week decline in SA claims—on a non-seasonally adjusted basis, the data was just as positive.  Although claims did not take out the 500K level by this measure, they did fall over 100K to 504.7K which also marked a pandemic low.  PUA claims dropped around 20K to just above 100K. Again, that makes for the lowest level of claims both for this program and on a combined basis since the start of the pandemic. 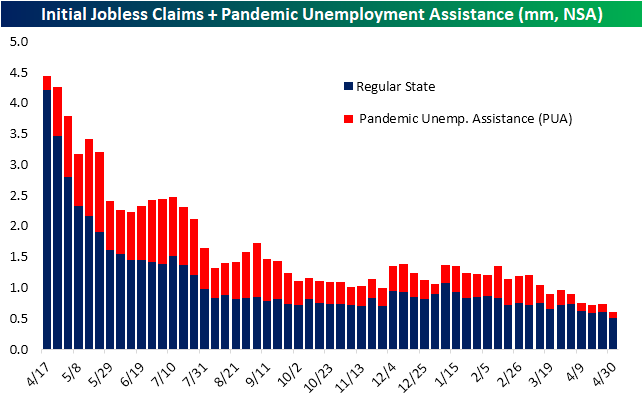 Lagged an additional week to initial claims, continuing claims continue to look less positive. As we mentioned last week, though it doesn’t take away from the fact that there have been massive and consistent improvements in just a year’s time, continuing claims have experienced a significant deceleration in improvements over the past few months.  The past couple of weeks have been the pinnacle of this. Last week’s reading was revised lower by 7K meaning the print only saw a 1K increase WoW, but that still snapped a 14 week-long streak of consecutive sequential declines. Pair that with the 37K increase to 3.69 million this week, and continuing claims have experienced the first back-to-back increases since last May when jobless claims were rising by well above 1 million per week. 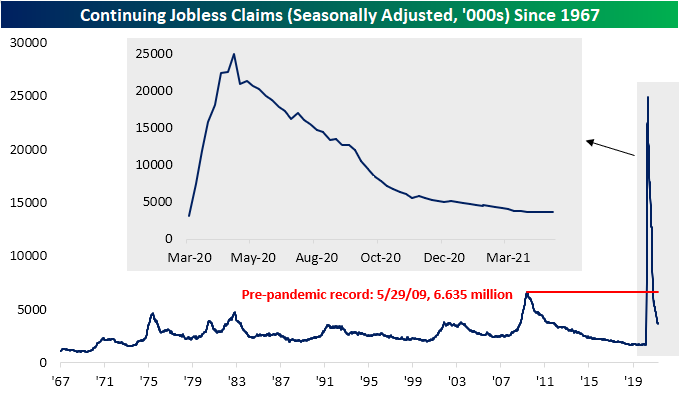 Even though continuing claims via the regular state programs have plateaued, that gives an incomplete picture.  Including all other programs helps to solve that, though it does create an additional week’s lag to the data meaning the most recent week is through April 16th.  Including all programs, the tone is more optimistic. Total claims across all programs fell by 404K to 16.185 million.  Barring the irregular drop in the first week of the year to 16.048 million when some plans had lapsed due to the timing of the signing of the spending bill, that makes for the lowest level of claims since the first week of last April. Considering the lack of improvements in regular state claims and the fact that the program accounts for a smaller share of total claims than earlier in the pandemic, the main drivers of the overall decline in total claims were significant drops in PUA claims and the Pandemic Emergency Unemployment Compensation (PEUC) program.  Click here to view Bespoke’s premium membership options for our best research available. 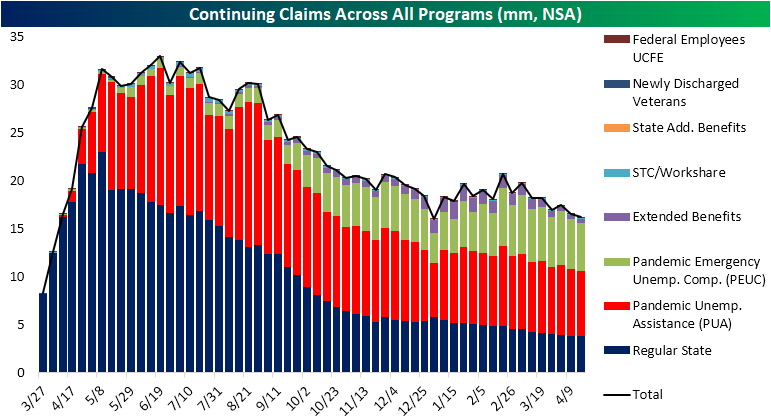 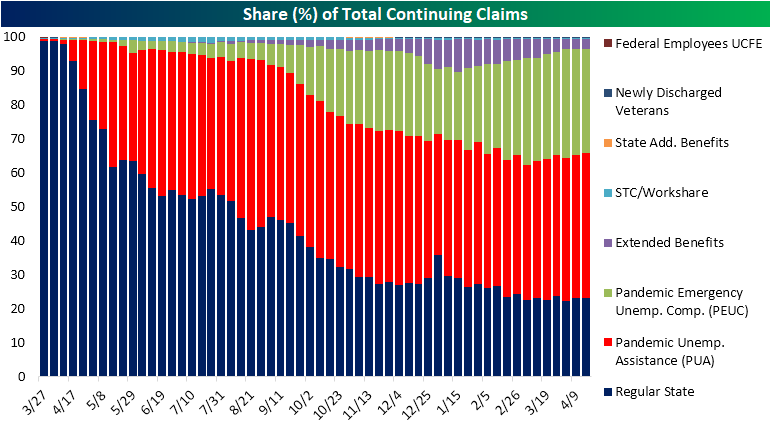