After falling to 213K last week (revised up from 212K), initial jobless claims returned right back to where they stood the week before at 218K.  While that was a bigger increase than expected—up 5K from last week compared to expectations for claims to rise to 215K—claims have not made any significant new high or low. Instead, the data remains right in the range it has been in for the last six months.  Claims trending sideways, if not slightly lower over the past year, has not necessarily been a bad thing though as they have held at very healthy levels and continued the record streaks at or below 250K and 300K.  Those streaks have grown to 108 and 243 consecutive weeks, respectively. Overall, this week’s report was nothing too exciting and only reaffirmed the recent trend of no improvements but also no deterioration in the data.

The four-week moving average reiterates this trend as well as it fell to 214.75K from 215.25K.  This was the second straight week with a decline of 0.5K week-over-week. The moving average is also slightly lower year-over-year dropping just 1.25K. 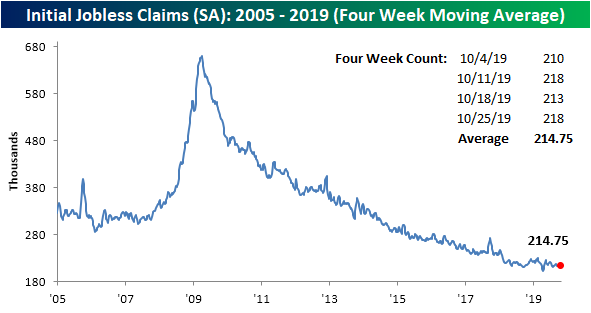 While those are improvements, they are much smaller than earlier in the cycle. As shown in the chart below, the sideways trend in jobless claims has shown up in the fact that y/y readings in the four-week moving average have flatlined. 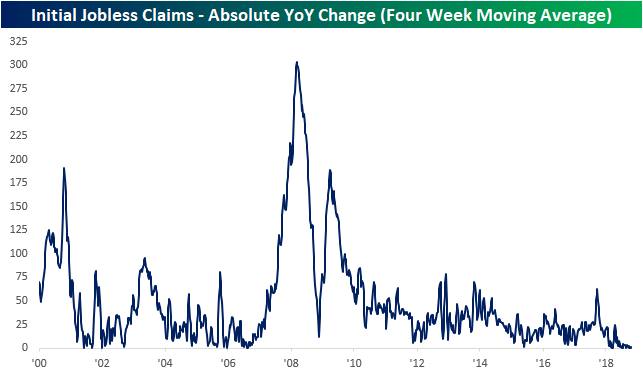 As with the moving average, non-seasonally adjusted jobless claims fell WoW and YoY. Now at 198.1K, NSA claims are just 0.4K below where they stood one year ago. Looking forward through the end of the year, seasonal patterns will likely lead NSA claims to grind higher week-over-week until the annual peak around the end of December/early January. Start a two-week free trial to Bespoke Institutional to access our interactive economic indicators monitor and much more. 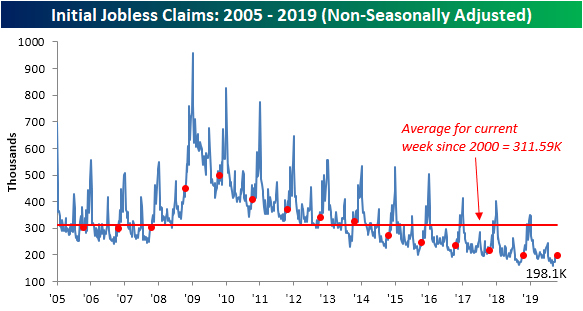