Claims Coming In After the Storm

In addition to a higher revision of last week’s number (up 6K to 736K), initial jobless claims were higher this week moving up to 745K.  While claims didn’t improve, they did come in 5K better than expectations and they remain around some of the lowest levels since November. 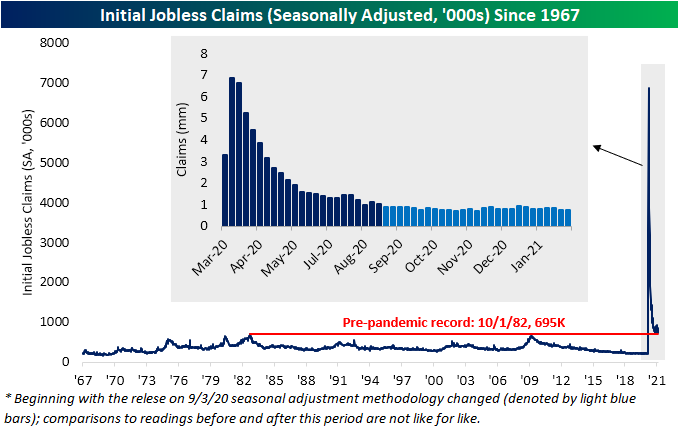 Unadjusted claims were also higher rising 31.5K to 748.1K.  Again, in spite of that increase, claims are still at some of their best levels since the fall. Additionally, the current week of the year has normally experienced an uptick week over week.  Going back through the history of the data, 72% of the time the current week of the year has seen a WoW uptick in claims. 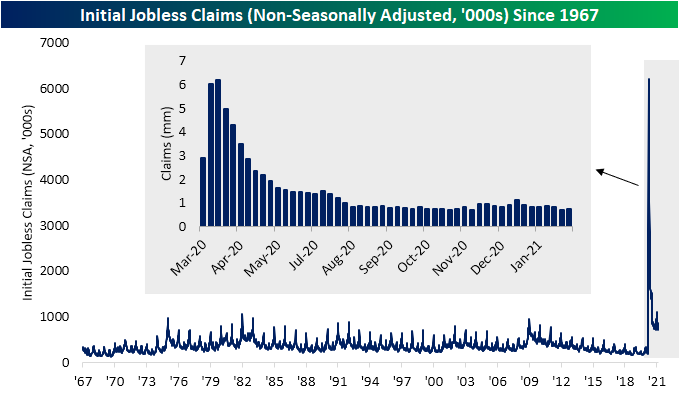 Claims from the Pandemic Unemployment Assistance (PUA) program also saw a slight uptick this week rising from 427.45K to 436.7K.  The increases in regular state claims and PUA claims means total initial claims for the most recent week rose to 1.18 million from 1.14 million the prior week. 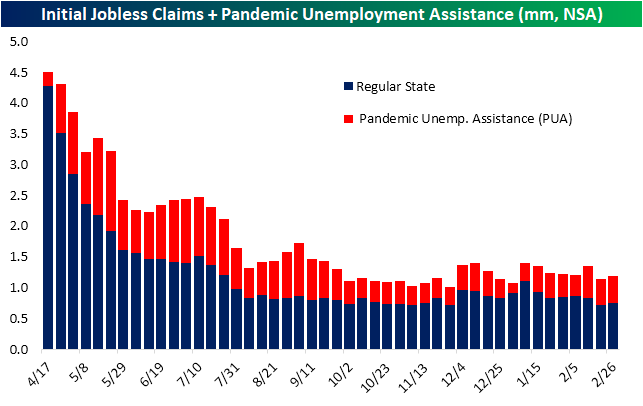 In the past few weeks, we have noted how state-level claims have seen some interesting quirks like very high readings out of Ohio. Again this week, Ohio was the single largest contributor to the level of national regular state claims followed by California, Illinois, New York, and Texas.  Of these states, Texas also saw the largest week-over-week increase in regular state claims potentially as an after-effect of the winter storms in the region. That is after the state actually reported lower claims last week in the immediate aftermath of the storm. Although the Lone Star state saw a big increase in regular state claims, PUA claims saw a less significant uptick.  Once again, Ohio saw a much more significant uptick by this measure. 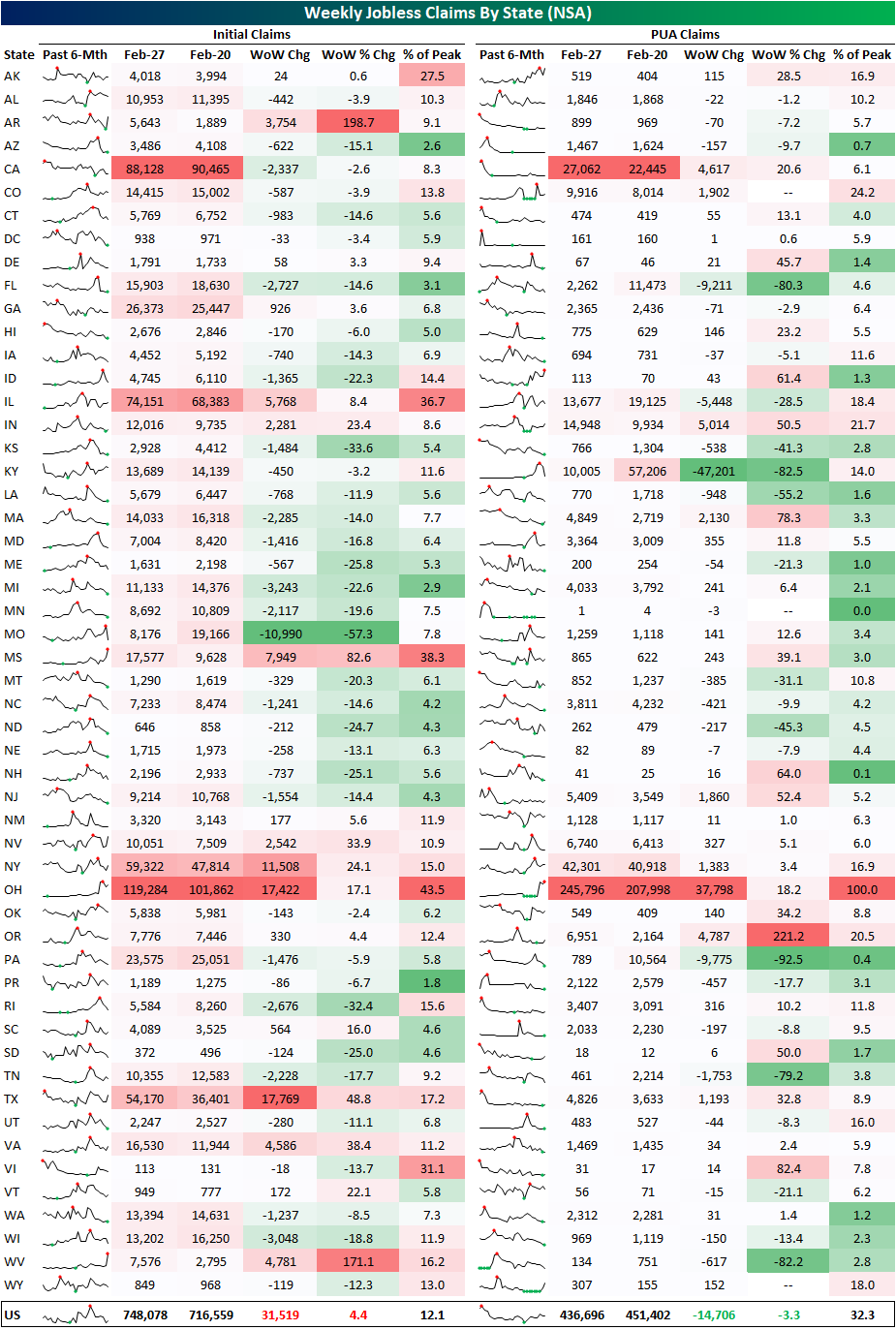 While initial claims have not seen much of an improvement, the decline keeps on coming for continuing claims.  This reading for the week of February 19th fell to a new pandemic low of 4.295 million; down 124K from the previous week. 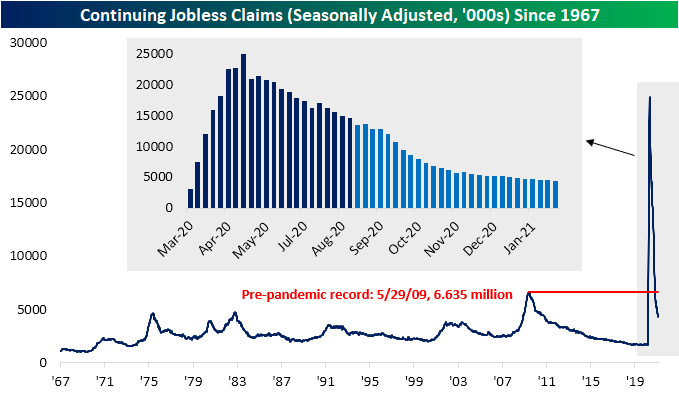 Tacking on all other assistance programs delays the data one more week. For the week of February 12th, continuing claims across all programs were lower at 18.061 million.  That is the strongest reading since the week of January 15th when total claims had fallen to 17.873 million.  The lower reading in total claims was a result of declines across almost all programs with the biggest decline coming from Pandemic Emergency Unemployment Compensation (PEUC) claims which fell by just over 600K.  Click here to view Bespoke’s premium membership options for our best research available. 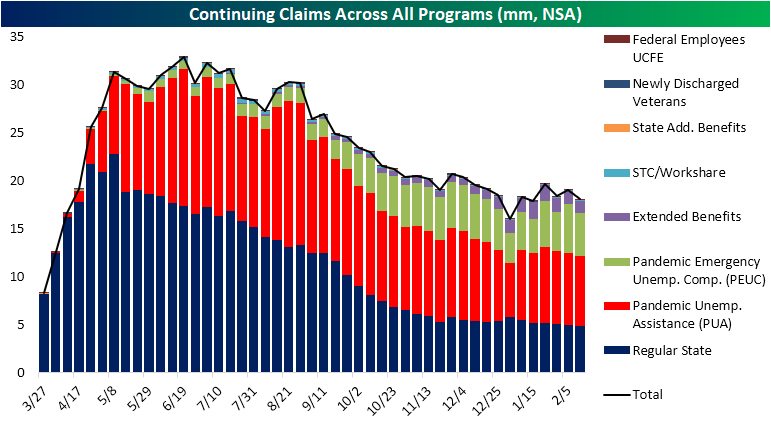 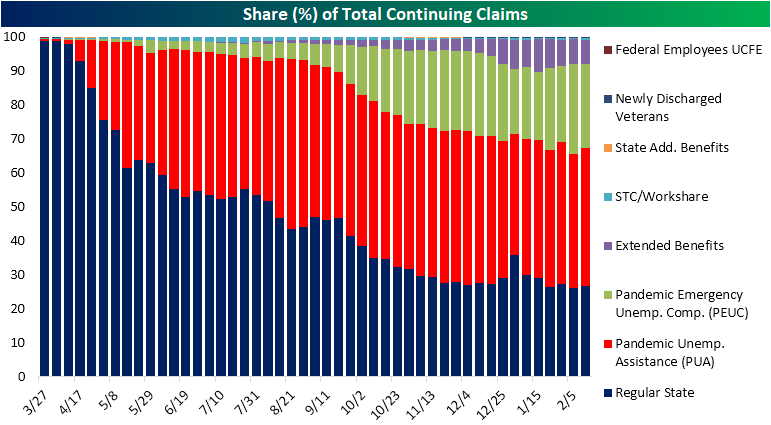