It’s been a little over a month since initial jobless claims reached their highest level since 2017 at 252K.  Since that peak, jobless claims have fallen for five consecutive weeks for a total drop of 48K.  That is the longest such streak since April of last year, and also the largest decline in claims during such a streak since October 2017 (55K). Now at 204K, jobless claims are the lowest they have been since the end of November when they dropped to 203K. Back at the low end of the past year’s range, claims have completely reversed the spike from just a few weeks ago.  In order to take out the cycle low of 193K from last April, though, claims would also need to decline by another 11K.

The aforementioned peak of 252K shook up the picture for the labor market at the end of 2019 including the four-week moving average which typically helps to smooth out week to week fluctuations in the data.  Fortunately, over the past couple of weeks, the data has moderated considerably. Last week was significant with regards to the moving average given that 252K peak had rolled off the average allowing it to experience its first decline in a month. That has continued this week as another recent high of 235K likewise came off the average to be replaced by this week’s much lower 204K print.  While not as large as last week’s 9.5K decline, the moving average experienced another sharp decline of 7.75K to 216.25K. 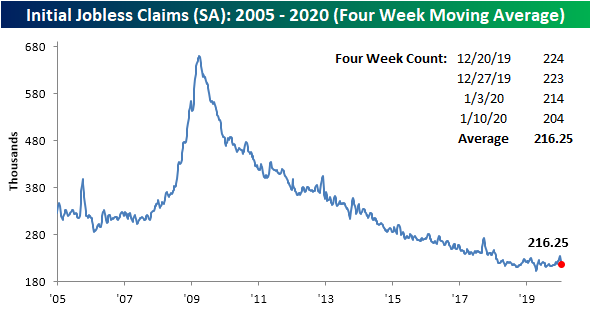 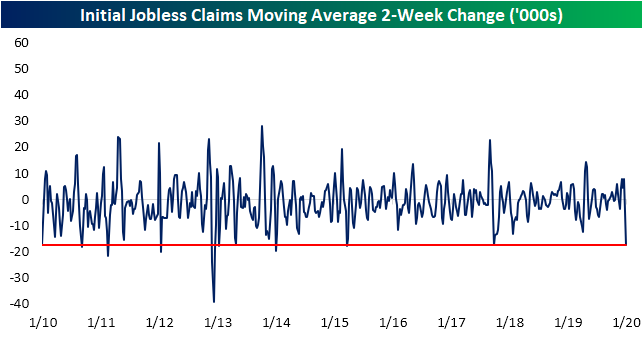 As for the non-seasonally adjusted data, claims rose slightly from last week to 336.9K.  As we have mentioned last week, the first couple weeks of the year typically put the annual peak in place.  With claims slightly higher this week compared to last, the 336.9K print is likely to be this year’s high.  If that is the case, this year’s peak would be 14K below last year’s and also down 7.6K YoY compared to the current week of the year last year.  Start a two-week free trial to Bespoke Institutional to access our interactive economic indicators monitor and much more. 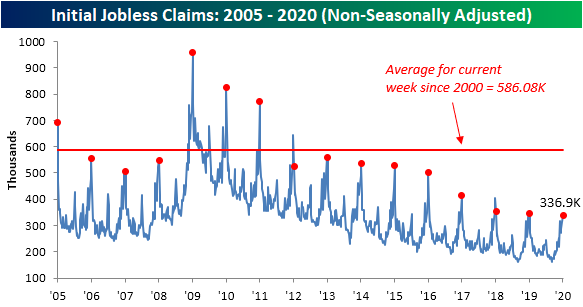